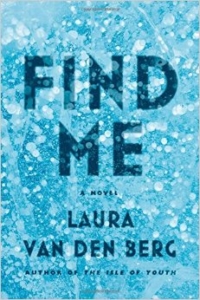 The time is ripe for a good disaster book: a dystopia in which the villain is not a panoptic government — but a virus, ourselves, the breakdown of our memory, and by extension, society. Laura van den Berg’s beautiful and continually surprising book Find Me is powerful enough to justify quoting the entire first page. It captures the clarity of a vision that’s luminous and terrifying, both matter of fact and deeply strange.

Things I will never forget: my name, my made-up birthday, the rattle of a train in a tunnel. The sweet grit of toothpaste. The bitterness of coffee and blood. The dark of the Hospital at night. My mother’s face when she was young.

Things other people will forget: where they come from, how old they are, the faces of the people they love. The right words for bowl and sunshine and sidewalk. What is a beginning and what is an end.

Most of us know, empirically, that much of our memory is false (the dangerously fluid eye witness reports that cause innocent people to be arrested; the way our minds create the illusion of a continuous field of vision). Yet despite all evidence to the contrary, I have a hard time internalizing the fact of my fragile, shifting memory.

The terrible truth is that memory is subject to change in the very act of recalling it; it is wired in the brain anew, reified and slightly altered. The associations that bring about the recollection can permeate the memory itself, shifting the borders of now and then.

The narrative of Find Me occupies this liminal space, with frequent detours and dead-ends into the past. By the time a plague of memory loss sweeps the country, Joy Jones has spent a lifetime trying not to remember. In the beginning of the story, a time characters refer to as “before the sickness,” she is nineteen-years-old, working the graveyard shift at Stop & Shop, and sneaking swallows of cough syrup (in a way as a self-protective compromise, because she’s afraid of hard drugs).

The irony is that, in spite of her attempts to obviate her mind with cough syrup, she is immune, with precious few others, to the sickness. In some ways she is uniquely prepared for the United States’ descent into chaos. Her survival in the former world depended on repressing certain memories: her rough upbringing in group homes, having been abandoned on the steps of a hospital as a baby; missing the boy from a foster home whom she thought of as a brother. To be a functional adult in the wake of a series of loss, Joy will not fathom her early and deepest memories.

A theory on why we stop remembering: there is a part of our story that we do not know how to tell to ourselves and we will away its existence for so long that finally our brain agrees to a trade: I will let you forget this, but you will never feel whole.

Joy later speculates that maybe the survivors have some damage in common that caused the virus to skip over them, as if willing away a piece of one’s memory works as an inoculation. Along with 149 other Americans, Joy is recruited to join a study on immunity in hospital in the middle of Kansas for ten months. Not much seems to be accomplished during this but biding time, in a shelter from a civilization that has fallen and tries to rebuild. Half of the book takes places in the hospital, where Joy encounters an interesting cast of characters (twin boys who hatch an escape plan; a roommate-turned lover-turned friend; mysterious nurses whose names the patients are not permitted to know). What we know of the greater world is communicated through limited use of television and the Internet (checking the list of the reported dead on WeAreSorryForYourLoss.com), along with rumors and sightings of humans from the hospital windows (wanderers whom they call Pilgrims). In the second half of the book, Joy is out in the world, on a difficult journey to Florida, in search of her birth mother, and this is where the scope of the story shifts. A figure from her past reemerges; she spends time with other survivors in a house that plays tricks on her senses; she begins to remember everything about the missing year of her life, at 8-years-old.

Van den Berg has the sensibility of a poet: she wastes no words. It isn’t that the language is lush and lyrical, or sparse as a haiku. Her poetics is finding the right word, not wasting a breath, and never going for the expected adjective. A symptom of the disease is silver lesions that gleam terribly. “Christina’s mouth was molting silver. Her lips smacked at the air.” It is strength of the novel that van den Berg leaves the technical aspects of the disease alone. The focus on the subjective experience and the meditation on memory keeps Find Me from succumbing to science fiction. The book isn’t about a cure and there is no one to blame. There’s no villain, only chaos, making the plot plausible and deeply chilling.

“All these signs of the end. How could we claim to have been caught by surprise?” she asks. It is like the future feared in Ben Lerner’s 10:04 has arrived, and I realized that my favorite books in recent months have been anxiety-provoking. Such as Eula Biss’s brilliant essay On Immunity: An Inoculation, which examines an almost pathological fear of toxins, and a misguided belief that “nature is entirely benevolent.” Reading these books in succession, I wonder has every era felt as apocalyptic as ours? Perhaps living under the nuclear threat of the Cold War felt like this, but worse. And it’s true there are humans on the planet living lives of struggle that are unimaginable to those of us in the first world. I think watching your neighbors die in drone strikes must feel like the world is ending.

Even in the US where many of us lead lives of comfort — crippling student loans and credit card debt notwithstanding — it still feels like the tail end of something. We know the manner in which we live is not sustainable. Instead we worry about health all the time, afraid of contamination and epidemic, and/or afraid of vaccines and/or afraid of the anti-vaxxers fucking up the herd immunity for us all. We worry about pollutants in breast milk. We’re freaked out by the harmless microscopic shrimp in New York City drinking water. We live with the anxiety because it isn’t acute, it’s only constant.

Joy says “For as long as I could remember, the weather had felt apocalyptic. Y2K fever and the War on Drugs and the War on Terror. The death of bees and the death of bats and radioactivity in the oceans and ravenous hurricanes. I thought the country was like a fire that would rage and rage until the embers lost their heat, but instead the sickness appeared and within two weeks it had burned through the borders of every state in America.”

In spite of its dark material — the stuff of nightmares for those of us who fear Alzheimer’s — Find Me is a pleasure to read. I consumed it in one day, driven by the assured, idiosyncratic, and deeply likable voice. Unlike other stories about the apocalypse, this book is tender: a register that’s quiet, a worldview that’s kind. This is a stunning debut novel for van den Berg, who has already published two short story collections Isle of Youth (2013) and What the World Will Look Like When All the Water Leaves Us (2009). I expect Find Me will have a wide appeal, because it’s excellent literary fiction, with the plot-driven energy of genre fiction. What makes this book different is that the realism begins to break down once we’re out of the hospital; it’s a slow descent into the surreal. Van den Berg gives us a mystery and has the confidence to let it end unsolved.
Laura Creste is an MFA candidate in Poetry at New York University, a graduate of Bennington College and co-public relations editor of Washington Square Review. Her poems have appeared in plain china, the Silo, Control Lit Mag and elsewhere. She has written for Bustle, Full Stop, and [wherever] magazine.