Half a Lifelong Romance – Eileen Chang 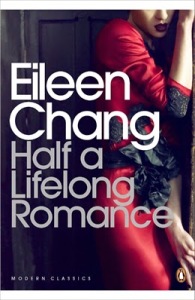 Eileen Chang is iconic to modern China in a similar sense that Woolf and Lispector are iconic: women and writers who have been spared categorization as either diamond-cut literary talents or cults of glamour because history has now found them more compelling as both. Chang was born in 1920 into a prominent feudal family in decline, as Shanghai was becoming “Paris of the East, New York of the West.” Her kind of beauty is often associated with this decade of cosmopolitan opulence unprecedented in a Chinese city — for the same reason lipsticks at Sephora today have names like “Shanghai Express” and “Shanghai Rose” and “Shanghai Spice.” The romance and glamour are useful points of access to her work, but those alone are soon unsatisfying.

A larger part of the cult of her literary legacy is a result of her body of work as lived philosophy. Chang spent her early adulthood moving between Hong Kong and Shanghai. Having intuited at an early age that writing would be the only way she could make a living, Chang wrote prolifically and pragmatically. But the fact that personal decisions — writing for U.S. propaganda services in Hong Kong and marrying a high-ranking officer in the Japanese-sympathizing Wang Jingwei Regime during the Second Sino-Japanese War — might be at odds with the idealism of history was not a ground for compromise in the way material survival was for Chang. Her gift served her for life, while her interest in the living served her work. And it is in her fiction where Chang became deftly ruthless at observing the effects of these conflicting values on quotidian relations: the personal is unfortunately political.

She cemented the theme early on in Love in a Fallen City, published in 1943, in which the fate of two lovers becomes entangled with the fate of Hong Kong in shambles during World War II. Two decades later, in Half A Lifelong Romance, set in pre-war Shanghai, she deals the cards for a slightly larger set of characters who become enmeshed in the negotiations between personal independence in an urban society and the politics of family values based on reciprocity.

Half A Lifelong Romance was initially serialized in the ’50s in a communist-sponsored Shanghai magazine under the title Eighteen Springs. The revised version under the new title was published in 1969 as Chang’s first full-length novel. By that time, Chang had already moved to America for more than a decade, first as a Hong Kong correspondent for U.S. Information Service, and then as a scholar at UC Berkeley’s Center for Chinese Studies. (Chang eventually moved to Los Angeles, where she lived and wrote in recluse until her death in 1995.) In spite of her American ties, English interest in her work only surfaced recently with two translations by Karen S. Kingsbury, an international studies professor at Chatham University.

The protagonists in the titular romance are Manzhen Gu and Shijun Shen, who first appear as young, urban, upwardly mobile workers who met through a mutual friend at work. The novel begins in retrospect, as a so-far anonymous, middle-aged “he” looks back on a relationship with Manzhen fourteen years ago. (Her name is offered up front, as if a symbol of an already more fully formed being, in contrast to his pathetic, stagnant conservatism.) In a positivist spin, they belong to a generation who can afford to marry for love — the triumph of cosmopolitan individualism over their parents’ conservatism. But here is where expectations diverge: in Chang’s world, the marriage plot hinges on the geometry of interests among mothers, sisters, co-workers, fiancés, ex-fiancés, fiancés of ex-fiancées, who fight out in gossip, in intercepted letters, and in passive-aggression. It is a familiar narrative complicated by the injustice of a social contract that regards honor as credit and favors survival at the expense of integrity.

As a result, where Jane Austen is predisposed to laugh in this “neighborhood of voluntary spies” (Austen’s phrase), Chang dares her characters to live on: To what extent can one fault a mother for preventing a financially unsound marriage, at the expense of so-called romance? To what extent may one forgive a sister’s life-ruining betrayal when she has also put one through school by working as a taxi-dancer, which has in turn destroyed her marital prospects? What even qualifies as life-ruining? What is or isn’t for one to forgive? To blame?

In order to live with their decisions, Chang’s characters are tireless fatalists who self-rationalize. They interact, speculate, assume, infer, withdraw, analyze, and, in the end, react by betting all odds on the most conservative move. At the heart of the novel is the psychological drama of the probable, starring fraught relationships that mistake altruism for compassion, and lack of open communication for tacit understanding. In one typical instance:

Finally the doorbell rang. Amah Gao, with Shijun standing right behind her, opened the door for Mrs Gu. He greeted her politely, this being the first time he’d seen her on this trip to Shanghai. But Mrs Gu did not respond, which struck him as odd; she even seemed alarmed. He thought this meant that she knew about the break-up, and was angry. That made him feel ashamed, which strangled the words in his throat. Mrs Gu had been fretting about seeing him, and when he suddenly appeared, it threw her off balance: she wanted to pour out everything to him. She had so much anguish, and no one to help her talk it through — at that moment, Shijun looked so familiar, she almost broke down in tears.

Tragedy is a condition, rather than the failure to act heroically. In another twist, Half A Lifelong Romance might have been a comedy of error, but the relief in reading Chang in Chinese lies in her mastery of the dispassionate distance between her tender prose and the cruelty of the situations it depicts. In Kingsbury’s translation, however, we are left with a more earnest narrator, whose voice struggles to navigate the back alleys of a foreign period, and in turn obscures the universal human drama.

In addition to the literal time frame, the Chinese title conveys the sense of metaphorical longevity (“half a lifetime”) and the idea of serendipity, which is less sure-handed than “fate” and more neutral than what we associate with a meet-cute. (In comparison: the Chinese title of David Nicholls’s One Day has an effect closer to “one date,” where “date” would connote both the occasion and the calendar.) “Eighteen Springs” is a frequent poetic choice for film and stage adaptations, but Kingsbury opted to err on the side of avoiding confusion. As a result, we have to make do with the underwhelming striptease in “Half A Lifelong Romance.”

But as Kingsburg’s clumsy prose drudges on in the first third of the novel, I became anxious for Chang. The patchwork of idioms, graceless syntax, and rigid constructions takes readers into an anachronistic universe that only exists on the mythical shelf of timeless translation — we study English translations of The Iliad to learn about how and when it was translated as much as we read for the content of The Iliad. The translation leaves a margin for more fundamental inquiries: Who should read Eileen Chang? Why read Eileen Chang now?

Chang’s world recast in contemporary English magnifies this doomed insularity. As Shijun frets at a moment of misunderstanding between him and Manzhen: “It was so unfair — words could not begin to express the unfairness of it all.” They have listened to their mothers’ advice, hustled to make a living, spoken only when called upon — they have done nothing wrong to deserve tragedy. But words fail for them because they have put it to wrong use: in perfunctory greetings instead of as acts of care; in passive aggressive baits instead of channels for empathy. Words have made their tragedy known to us, but not to characters themselves.

But this is also how reading Chang in a radical individualist context challenges the imperialistic way it is is often put in opposition to Chinese collectivism. In spite of the literary shortcomings of Kingsbury’s translation, the new text distills the aspects of Chang’s world that become intelligible because we can now see them as either parallel or a foil to Anglo-American values and customs. And so the privilege of omniscience calls for a more fulfilling conclusion than pity, when the characters’ tragic fate is as much individual failure as a product of their society. The original passage where “neighborhood of voluntary spies” appears in Northanger Abbey comes to mind again:

Dear Miss Morland, consider the dreadful nature of the suspicions you have entertained. What have you been judging from? Remember the country and the age in which we live. Remember that we are English: that we are Christians. Consult your own understanding, your own sense of the probable, your own observation of what is passing around you. Does our education prepare us for such atrocities? Do our laws connive at them? Could they be perpetrated without being known in a country like this, where social and literary intercourse is on such a footing, where every man is surrounded by a neighborhood of voluntary spies, and where roads and newspapers lay everything open? Dearest Miss Morland, what ideas have you been admitting?

Substitute “we are English: that we are Christians” for “we are Gu’s” or “we are Shen’s,” and Chang’s insistence on letting her characters act on their own terms becomes an exercise in compassion. Here is another possibility: tragedy is sometimes another word for self-fulfilling prophecy.