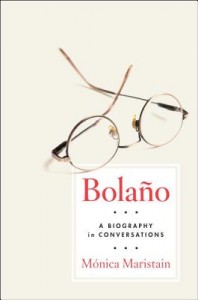 When asked to provide details of his life in his later years, William Gaddis would quote from his massive first novel, The Recognitions: “What’s any artist, but the dregs of his work? . . . the human shambles that follows it around. What’s left of the man when the work’s done but a shambles of apology.” Gaddis abhorred interviews, but he was also fond of quoting Joseph Frank’s five-volume biography of Dostoevsky. Sam Beckett also spurned press inquiries — until he eventually allowed James Knowlson to organize his personal effects and papers for a biography to be published after his death. William Makepeace Thackeray, more stubborn than Gaddis or Beckett, would — with an unapologetic air of finality — shut the door on his interviewers’ fingers saying,“I am a private gentleman.”

As his literary work attests, Roberto Bolaño did not consider himself a “private gentleman,” and in 2003, awaiting a liver transplant, he consented to an interview with Mónica Maristain who was then working for the Mexican edition of Playboy. He was, as a friend notes, “excessively generous with younger writers.” Maristain recalls, “The interview ended up being his last, and it caused a commotion when it was published. This wasn’t the result of the journalist’s skill but the power of the subject and the fact that it was published the month before he died”. One wonders if Bolaño, ever the omniscient narrator, knew what he was up to: the interview eventually anchored Melville House’s first book about him, Roberto Bolaño: The Last Interview, and spurred Maristain to compile the first biography of the author, Bolaño: A Biography in Conversations.

Hypothesizing about the details of Bolaño’s life has become a pastime for book lovers and myth seekers since his 2003 death at the age of 50. But instead of rehashing the sordid and romantic images that the author cultivated of himself in his works, and that has been propagated in his posthumous reception, Maristain’s biography of the legendary author dispels many of the rumors which have emerged from his previously shadowy life story. In Bolaño Maristain collates interviews she conducted with the author’s associates to present a sketch of the artist as he appeared to his friends, family, and colleagues during his lifetime. Though the biography is provisional in nature (Maristain was not yet able to access Bolaño’s papers), readers are granted a digestible account of a man who lived a life in love with literature. 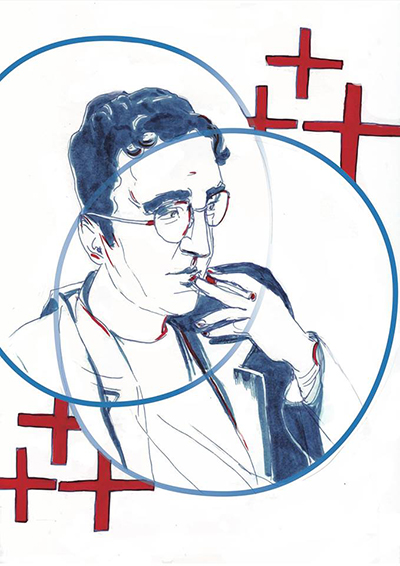 Jorge Luis Borges, Bolaño’s foremost literary idol, described how readers romanticize the lives of writers during a lecture series at the University of Buenos Aires in 1966. Samuel Taylor Coleridge, author of “The Rime of the Ancient Mariner”, is the Argentine’s case study. “Coleridge,” Borges announces to his class, “for what he thought, what he dreamed, what he carried out, and even more, for what he failed to do, represents an archetype, we could almost say, of the romantic man. More than Werther, more than Chateaubriand, more than anyone else. And the truth is, there is something in Coleridge that seems to fill the imagination to overflowing. It is life itself, filled with postponements, unfulfilled promises, brilliant conversations.” Is this not the sensation Bolaño invokes in readers today?

But the story of Bolaño’s life has been misrepresented by a public too eager to call him a beatnik poet. Many readers, professional critics included, found corroboration for their preconceived notions of the artist-as-outsider in the fictions Bolaño wove about his life. In a 2013 essay for The Los Angeles Review of Books Lisa Locascio writes:

Seeking a point of entry to Bolaño’s unforgettable prose . . . we repeat the verses of his contradictory legend: He was an alcoholic like Bukowski. He was Alejandro Jodorowsky’s protégé. He was a heroin addict. He never did drugs. Hepatitis C, contracted from dirty needles, damaged his liver. He was arrested under suspicion of terrorism in Pinochet’s Chile, held in a secret prison, and escaped execution only because the men guarding him turned out to be his high school classmates. He was never in Chile. The prison story is a compensatory fiction prompted by guilt. Naturally a poet, he only began writing fiction to support his family.

The preponderance of these mistruths make elucidating Bolaño’s biography a moral issue. Maristain’s biography is a step in the right direction, though more must be done, particularly in regards to understanding Bolaño’s involvement in, or absence from, the 1973 Chilean coup d’etat led by Augusto Pinochet. Bolaño claimed to have been imprisoned by Pinochet, as Locascio mentions in The Los Angeles Review, but Maristain quotes sources who believe him to have been imprisoned by Pinochet, as well as sources who wholeheartedly deny that he was even in Chile for the coup. Bolaño could very well have lied about his confinement, just as Hemingway fibbed about his military service; the two of them, it seems, might have felt remorseful over not participating in their respective generations’ zeitgeist.

Truthfully, it matters little if Bolaño was imprisoned. Stephen Crane wasn’t present for the Civil War, though The Red Badge of Courage was hailed as a firsthand account of the bloodshed. Hieronymus Bosch may or may not have witnessed his hometown burn down in the 15th century, but he included nightmarish conflagrations in his most well known works, just as totalitarian regimes and violence are major themes in Bolaño’s oeuvre. Maristain is ambiguous on the matter; smartly, perhaps, because the answer might well reside in Bolaño’s papers that are currently inaccessible.

Maristain’s interviews focus much more on Bolaño’s lifestyle than his politics. Her subjects’ accounts of Bolaño as a man are definitive — he was generous to a fault, warmhearted, and hardly ever left his home. Bolaño was not an alcoholic, nor was he a heroin addict, a rumor that has persisted due to an opening sentence of a short narrative that begins, “I gave up heroin and went back to my town and started on the methadone treatment administered me at the clinic . . .” In 2008, Jonathan Lethem, novelist and man of letters, took the bait and slandered about town in the pages of the New York Times while reviewing 2666. Bolaño, Lethem writes, died “from liver disease traceable to heroin use years before.” In 2009 the Times published an article by Larry Rohter entitled “A Chilean Writer’s Fictions Might Include His Own Colorful Past” that refuted Lethem’s claims (though no correction was included in the Lethem review). In the pages of Maristain’s biography Leon Bolaño, father of the author, exclaims, “Roberto was never a drug addict! He just met with his friends to drink coffee, write, and exchange ideas.” Despite Rohter’s journalism, and the Bolaño family’s protestations, the legend continued.

Maristain redeems Bolaño’s life story in this new biography. A grandson of illiterate Spanish immigrants to Chile, Bolaño’s decadent imagination and intellectual restlessness flourished when his family relocated to Mexico City during the artist’s adolescence in the 1960s. While residing in Mexico City, Bolaño became the locus of a group of creative comrades who called themselves the Infrarealists. Alluded to in The Savage Detectives, Infrarealism can be best described as a punkish attitude towards official culture. Maristain is especially nimble while teasing out the vagaries of Infrarealism from her interview subjects, but the enigmatic qualities of the group might be best embodied by Bolaño himself. Bolaño gathered his Infrarealist friends into his stories, fictionalizing them — and elements of himself — for his reader’s enjoyment.

As a young man Bolaño stole books from the racks of bookshops and the shelves of his friends: it was a practice he’d later write into his fiction. Maristain spoke with Juan Pascoe, who first published Bolaño in the artist’s early twenties, about this nefarious habit. Pascoe said, “I showed [my new purchase] to Roberto very enthusiastically and he said to me: ‘Well, good, I’ll take it with me. I know someone who should read this book.’ He didn’t say who. And he took it. Of course, he never gave it back.” Despite such behavior, Bolaño’s charm was irresistible. Nearly all of Bolaño’s friends (and Maristain counts herself among them) attest to his generosity of spirit and personable nature. He’d talk for hours on the telephone, and often invited friends for dinner (his paella is described as mediocre at best, despite what Bolaño would have you believe).

Maristain’s interview subjects barely disguise their urges to describe just how bourgeois and unromantic Bolaño’s life was. Instead of hair-shirts and heroin, Bolaño wore ironed clothes and drank tea. Maristain’s interviews reveal he even ate at Kentucky Fried Chicken, an image as incommensurate to the public’s perception of the artist as Beckett sitting through a doubleheader at Shea Stadium, or Borges wearing a clip-on tie.

There is a precedent for biographies of the kind Maristain has written. In an email conversation, critic and literary historian Steven Moore observes, “The precedent for the new Bolaño biography was first (I think) set back in 1985 with the publication of Peter Manso’s Mailer: His Life and Times, which consists of hundreds of snippets of memories and statements from quite a number of people. Since then there have been similar books, most recently Salinger by David Shields and Shane Salerno.” Maristain’s interviews, though necessarily uneven in style and consistency due to the sheer volume of voices present, provide a very human biography of an artist who has posthumously enjoyed a surge in readership in the Anglophone world. Maristain’s resultant biography unites Bolaño’s friends and associates in a kind of memorial service where stories — and differing accounts of the man — can be heard amidst the rapturous din of conjecture.

Andrew Mitchell Davenport is a middle school teacher, and a writer, in Brooklyn

Madeline Gobbo lives in Brooklyn with her fat cat Louie. See more of her work at madelinegobbo.tumblr.com