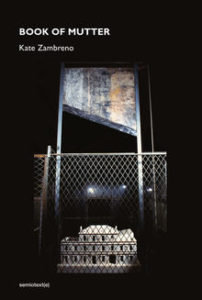 What I remember most from intense periods of grief — more than the physicalized sadness, the absurd dimensions of the body; more than the ways in which time goes limp, losing all structure — are the first moments of waking: the disorientation of opening your eyes in a familiar place, your childhood home, the unworried seconds before you remember what has been lost, before it hits you mercilessly. It happens only until your body absorbs an impossible history, learns to orient itself around its belatedness. Grief leaves you pitted and waiting, searching for a structure. The vertigo of extended sorrow opens another dimension where the past both coalesces into profound meaning and dissolves into incomprehensibility. “Time passes,” like Virginia Woolf writes after Mrs. Ramsey’s death To the Lighthouse. Memory is reconstructed, drifts. Time passes: mourning becomes not a progression but something dizzying, repetitive, refractive.

Writing of her mother’s death over a period of thirteen years, this central fact becomes, for Kate Zambreno, a shape, not a direction. In Book of Mutter she circles around the “death-theater” of her mother, and the strange returns of memory become the shadows around which the book settles into its intimate and disquieting form. At once a mourning diary, scrapbook, lyric essay, art criticism and literary memoir, Book of Mutter unfolds where grief destroys the shelter of narrative. Like the artist Henry Darger — one of the book’s central figures — picking up rubber bands on his neighborhood walks through Lincoln Park, Zambreno compiles discarded fragments, stray memories, failed attempts. She collects, like in Heroines, her essay-memoir about the mad wives of modernism, “remote and unknowable” women for her mantle, assembling an archive of mourning where art, literature and film function as surfaces on which it becomes possible to perceive and construct memory. Henry Darger alongside Louise Bourgeois, Roland Barthes alongside Peter Handke and Virginia Woolf: these are her interlocutors. In Book of Mutter, Zambreno raises the dead to speak for the dead; or, she raises the dead to lay them to rest.

“I need films to fill in her backstory,” she writes, finding her mother in Carl Theodor Dreyer’s Joan of Arc, “her real tears as her head was shaved,” or in Barbara Loden’s “eponymous Scranton housewife” Wanda. Her mother is Chantal Akerman’s Jeanne Dielman, worried about her house, her clean house; she is Hedy Lamarr, glamorous and tragic. Zambreno is Violette Leduc calling for her mother in the opening pages of her autobiographical novel: “Let’s go back again, open your belly and take me back.” Or Virginia Woolf, writing about not writing about her mother. Like Woolf, Zambreno also interrogates the great distances that exist between what is thought and what is spoken, the brilliant flashes of recognition that occur alongside an essential unknowability: moments as astonishing as the statues of saints in ecstasy, whose open mouths, for Zambreno, rouse the memory of her mother on her deathbed, leathery skin, covered in sweat, groaning under the drip of morphine. This possibility of recognition — of really seeing, of really being seen — persists as long as someone is alive. But once they’re gone, how do we speak of and to the dead? Which mournful litany of names, of places, of objects or obsessions or images, will recover the irrecoverable?

Like Roland Barthes insisting that he can only recognize his mother in fragments, Zambreno, too, circles around an essential silence: “What does it mean to write what is not there. To write absence.” Absence is one of memory’s standard card tricks; the covert movements of the mind blur the distinction between what is real and what is imagined and in time, memory deteriorates under the murkiness and ambiguities of a dream whose logic you don’t understand. Any endeavor to recover the past is a task as Sisyphean as the attempt to recognize the dead in old photographs; history is not a fixed horizon but a contested present, seen differently from each angle of memory, whose distortions are always in motion. In one of the book’s epigraphs, Zamreno quotes from Chris Marker’s opus on history, memory and art, Sans Soleil: “He wrote me, ‘I will have spent my life trying to understand the function of remembering, which is not the opposite of forgetting, but rather its lining. We do not remember. We rewrite memory much as history has been rewritten. How can one remember thirst.’” The moments that blister in time emerge out of a reel of impressions that have since been lost to its spiral. Memory is an act of revision, its reconstruction always a construction. How to depict a history rent by the vertigo of time, how to capture an impossible memory? How to write what isn’t there?

Like Marker’s essay film, Zambreno’s Book of Mutter depicts the process of thinking around a subject, with all its messy knots and false starts, its contradictions and hesitations, its flickering insights and thrilling moments of lucidity. As Zambreno’s musings and meanderings move between images and associations, history and memory get mediated through image and text, and in revisiting of her mother’s death Zambreno is not remembering but writing, rewriting. She explores, like Marker and Barthes, the role of the camera in constructing and reconstructing memory, in mediating and memorializing our experiences of the past. Excavating the entwined histories of photography and mourning, she asks us to think about the function of representation alongside memory’s black holes and continental drifts: “We never remember the moments our pictures our taken,” Zambreno writes. “We think we do, but we don’t. Photographs do not reflect the turbulence underneath.” Her mother, who hated having her picture taken, but was most worried, as she was dying, about how she would be remembered. Barthes, unable to recognize his mother in photographs taken before he was born.

But when Barthes comes across what he calls the Winter Garden Photograph, a picture of his mother, Henriette Barthes, when she was five, he finds there something which eludes communication, he experiences a remarkable flash of recognition: “I cannot reproduce the Winter Garden Photograph. It exists only for me. For you, it would be nothing but an indifferent picture . . . for you, no wound.” Zambreno looking through sepia-toned family albums, sifting through overexposed memories; even the still frames of old photographs keep shifting. “It is not the facts that I search for,” she writes. “It is something ineffable about my mother that I search for. What I want is amber and green glass and gold. Like her eyes. Our eyes.” The absence Zambreno writes around is additionally complicated; it is, in her mother’s case, also the absence that overlays secrets and lies, the falsified accounts designed to cover over a hidden history: an estranged daughter from a first marriage; a quick conversion to Catholicism, sanctioned with the passivity of an agreeable sure; the timeframe of her illness, the question of who knew and when, the question of: did she keep her diagnosis hidden?

The absence she circles around is also the silence of the housewife, of a woman whose past has become absorbed by a narrative of domesticity. “To be a housewife, in the old mold, was to live by the rule of erasure,” Zambreno writes. As she unravels the apocrypha of family narratives, Zambreno comes up against this fundamental erasure. She stumbles around her house of memories, asking: “But who was she?” The only answer is the apparition of a ghost image. Her mother clutching her purse, dabbing her eyes with nicotine-stained tissues, carrying her secrets close: “I’m not very deep Katie my mother would say, gaily. Almost as if to keep me from guessing.” She places a picture of her mother next to an image of Barbara Loden in Wanda, hesitating before entering the courthouse where she will stumble over giving a testimony, where she will relinquish custody of her children, where she will walk away from her old life and accidentally get caught up in a botched bank robbery. In the two images both women wear white hats. They are just visible over the roof of a car, brows furrowed, not looking at the camera. In each photograph, a suburban landscape, a wire or white picket fence, lines the edges of the frame. “Did my mother wonder like Mrs. Ramsey: But what have I done with my life?”

Zambreno circles around these memories, as much to remember as to forget. To remember so that she might be able to forget: “Or if not to forget, to attempt to leave behind.” To walk through the rooms of her childhood home and raise the hatchet, like in Bourgeois’s Cell (Choisy), a reproduction of the artist’s childhood home where a large guillotine is suspended above. Like Zambreno’s other interlocutors, Bourgeois functions as a way for Zambreno to enter the past, to revisit the scenes, rooms and objects of her own childhood home, to access memory with all its digressions and distortions — but the Cells series also provides a model for their ultimate severance. Stitching together the past is what allows for its destruction. Or if not destruction, disentanglement, as far as such freedom is possible, which might only mean: for the duration of the offering, as long as it takes the pyre to burn. Bourgeois has said that her sculptures were a way to reconstruct her childhood so as to liberate herself from its hold: “I have been a prisoner of my memories and my aim is to get rid of them.” If Book of Mutter is in part a memorialization, it is also an exorcism: “If writing is a way of collecting, even hoarding memories — what does it mean, then, to also wish to disown?” Here, the book both demands to be written, but also refuses to be written; it won’t come together, it expands and contracts; it takes thirteen years of writing, of failing to write; it resists, it mutters.

Anna Zalokostas is a bookseller living in New York. Her writing has appeared in Full Stop, Music & Literature and 3:AM Magazine.