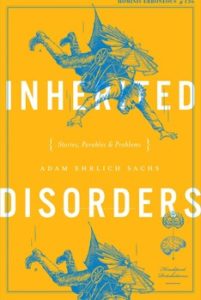 The subtitle of Inherited Disorders, the debut collection by Adam Ehrlich Sachs, promises an eclectic stew of “Stories, Parables, & Problems,” but really, each piece is all three. These are stories, from a few lines to a few pages: stories about fathers and sons, and the tensions and pressures that come with the territory. They are parables: they illustrate the comically repetitive lesson that it’s hard to do right by dad. And finally, they pose problems: how can a son do justice to his father’s legacy but still build his own? Or should he ignore his father? Destroy the legacy? Undo his father’s work? And what should he do with the inheritance? We’re not just talking money. In this collection, inheritances come in all shapes and sizes: unfinished scholarship, aesthetic doctrine, talking parrots, bodily features. The delivery method varies as well: a father might lovingly bequeath his legacy, or inadvertently pass it on, or unload it with spite. Such legacies and inheritances are rarely welcome; they are unwieldy, daunting — disorderly. An inheritance, then, is just another way by which fathers and sons disappoint and misunderstand each other. Still, though these stories seldom end merrily, this is not a cynical collection. For the most part, fathers love their sons, sons their fathers, forgiveness and near-reconciliations abound, and intentions are generally good. But patrimony is complicated, slippery, and fraught. And funny, too.

Take story #109, “Unfinished Things,” in which a son visits his father on his deathbed. The father asks him to finish what he started: Gibbon’s six-volume The History of the Decline and Fall of the Roman Empire. The father read five volumes but never got to the sixth. “Of course! cried his son. I will! I promise!” When the father also asks him to write a physical treatise on the atom, and a biography of Gibbon the historian, the son’s response is more tepid: “Um, said the son. Okay.” When the father also asks him to write a symphony that begins with “La,” and solve the three largest puzzles in the world, the progressive logic of the joke becomes apparent. The father’s dying wish coopts the son’s life. The punchline comes after the father loses consciousness but revives with a final request: “Reforest the Earth.” It is a lovely joke — absurd yet logically terminal, silly and bittersweet. It conveys a fatherly heap of unrealistic expectation and longing, a lament for the bygone world, and, even if only in small measure, a warm note of affection for the son—the vessel of hope for the future.

Sachs draws humor from the generic tropes of father-son relationships. Disappointment, expectation, pride, ambition, competition: Sachs calls upon these themes with a gentle, knowing summons. In fully embracing his animating conceit, Sachs has excluded—or spared—women from this collection. Their absence is a lingering joke, one that flirts with self-reproach: the pressure on fathers and sons is of their own making. They are prone to male self-seriousness, a particular strain of ridiculousness that is not so different from peacocking, or machismo, or bro-ing out, or putting one’s head up one’s ass. Males are vulnerable to male solipsism, and Sachs gleefully enumerates the contingent punishments men earn by caring so much, and so exclusively, for male lineage. As I read each story, I imagined a female figure — a mother, sister, wife or partner — waiting in the wings, rolling her eyes, wondering if she should keep watching, or shoot to kill. As the stories accumulate, an abiding pity takes hold: men, who are fathers, sons, or both, have to contend with the inanity of maleness.

There are 117 stories in this collection. One of the shortest, “Shimura’s Robot,” is 93 words about the invention of a robotic father to be used as a surrogate in orphanages. The invention is a failure—or, rather, a resounding success at embodying a distant father figure: “Mostly he ignores the orphans. Every fifteen minutes he raises one of his robotic arms and violently hushes the entire orphanage.” The sharp, dry humor of this brief story also contains a dark undertone. A rude robotic dad is funny; neglect, less so. The best jokes take on the serious substance of life; the best laughs contain at least the shadow of a cringe. Shimura’s robot is a proxy-dad for orphans, just as a son might be his father’s proxy, a replicant of the patriarch. The story also demonstrates the collection’s remarkably consistent tonal pitch, a repertorial aloofness that establishes the narrator’s distance from the subject matter. The story’s final sentence, “Shimura seems baffled by the negative response to his robot, which has led to speculation about his childhood,” again sounds that darkly comic note, this time about Shimura’s past and his relationship with his father. The pseudo-journalistic, nearly clinical narrative voice creates an illusion of objectivity. The joke here and elsewhere is that no objective narrator would ever assemble such a book; he himself must be equally embroiled. Like many of the stories, “Shimura’s Robot” reveals that behind that journalistic façade is an empathetic narrator who, in his exclusive attention to fathers, implicates himself as a troubled son. The collection is a comic convening of all those sons struggling with the weirdness, difficulty, joy, and sadness of having a father. It reassures them that they’re not alone.

In “Exhaustion,” a painter endeavors to finish a final painting on the subject of his father before he moves onto new and more external subjects—the Holocaust, in particular. But the painting grows and grows, becomes protuberant, protubes some more, demands evermore of the painter’s brushstrokes. In “Strassberg & Strassberg,” a team of songwriting brothers write beautiful love songs, but only ever on the subject of their father, a large Hungarian Jew with a big beard. In another, a son makes only unflattering paper mache dolls resembling his father. Sachs presents numerous iterations of fixation and obsession. Often in these stories, the obsessed attempts to purge himself of his preoccupations by indulging them fully. The goal is to use it till you lose it —exhaust the obsession to stop it from contaminating work and life. For the most part, these are artists, scholars, and craftsmen, as Sachs seems most interested in those who have committed themselves to single, consuming, somewhat esoteric occupations. This raises the stakes of the legacy: the more knowledge, skill, or specialization a father has, the more will be lost when he dies. The son, who holds the promise of carrying forward his father’s work, is also the father’s final hope for canonization. The collection makes light of how insubstantial a life can be, and how work treated with the utmost gravity and seriousness is still made trivial by death. Ripe for ridicule is the hope that lineage can preserve one’s ideas, and that future generations will substantiate one’s accomplishments. The book suggests that artists and intellectuals, with their penchant for myopic self-scrutiny, are more prone to suffer the disappointment of legacy. Here, legacy is a weak consolation for the disappointments of life, and the sons want nothing to do with it. But Sachs observes an equality of doom: fathers may be damned to the hell of obscurity, but they’re bringing their sons down with them.

Sachs sets these stories all over the world. It’s another running joke: the eclectic locales attest to both the doggedness of the narrator’s reporting and the global diversity of his Troubled Sons Society. Lithuania, Italy, Czech Republic, Japan, Tunisia—these settings create the sense of a worldwide epidemic and validate the narrator’s endeavor to collect these stories. The international sprawl also speaks to the collection’s influences. In interviews, Sachs has cited Thomas Bernhard’s The Voice Imitator as a seminal influence, and from Bernhard’s book he borrows both an aloof, globetrotting narrator, a narrow conceit, and a concise form. But whereas Sachs is obsessed with fathers and sons, Bernhard is obsessed with political corruption and madness. His collection, with its wry meditations and lofty narrative perch, is very cynical: his narrator gives the impression of a man watching crabs scrabble in the sand, but from the safe height of a lifeguard chair. Sachs has mentioned other great projects in this vein: J Robert Lennon’s Pieces for the Left Hand, and Joy Williams’s 99 Stories of God, in which God really is just one of us, an omnipotent joe just muddling along. Take this excerpt from Williams’s 99 Stories, #62:

The Lord was trying out some new material.

Sachs’s collection also recalls Janet Malcolm’s essay “41 False Starts,” a collage of attempts at writing a profile of the painter David Salle. Malcolm’s essay is proof that sometimes a subject matter is best served by a bumpy compilation of tries. Sachs’s collection is fine proof of that, too, and he himself has called this project a collection of false starts, the various beginnings to his novel about fathers and sons. Sachs has situated himself in an intriguing genre, among remarkably good company. But his book stands on its own as an exhaustive comic project, one that knows its ancestors and has selectively inherited the moves of those projects. Bernhard complained of writers who manufacture and painstakingly chronicle fictional lives. To him, writing was not meant to mimic human experience, and the writer was a thing apart, not a fellow traveler. Sachs’ collection seems to borrow that narrative distance and similarly eschew the come-along camaraderie of character-driven work. But Sachs admits far more warmth to his collection, and despite the dysfunction on display in these stories, and despite Sachs’s comedic mandate, the book is suffused with an odd compassion. No one is entirely to blame: it’s no single father’s fault that fatherhood is a monolithic difficulty. There are bad dads, yes, and bad sons. But everyone is, to different degrees, trying. Judgment, too, is a thing this collection avoids. Take those songwriting brothers, who never could shake their obsession with their bearded father—a weird obsession, and sad, too. But is it weird? Is it sad? The story’s last line informs us, “They seemed happy.”

Despite the humor and morbidity and missed connections, there is reverence for parentage as both a rickety bridge between generations and an odd relationship defying comprehension or simplicity. In general, Sachs avoids the simple answer; though this is a book well aware of its animating problems, it is, thankfully, not intent on solving them. Sachs does not undermine the complexity of family ties to get at easy humor. Humor is in abundance, and accessibly so, but it merely augments the rich oddities of paternity, and the book manages to achieve a simmer-state of poignancy. The collection conveys that anguish and comfort coexist in family matters. A final example: in “Utterly Inscrutable,” the son of a serial killer is asked how he could live with his father and not know his true nature. “‘Perhaps the closer we are, the more ignorant we are,’” he says. Another joke is playing out: the son continues to claim ignorance even though he found human femurs in his father’s sock drawer, human heads simmered in cauldrons on the stove, and the father wore “a necklace made of toes.” “‘Another person’s mind is always a mystery to us,’” the son repeats. Despite the story’s joke-structure and morbid content, there are real and complicated ideas at play: the limits of intimacy and familiarity, the inscrutable interiors of the mind. It’s the quintessential Sachs story: readily funny but oddly touching, seemingly simple but with an odd and bewildering depth.