How To Keep Your Volkswagen Alive – Christopher Boucher 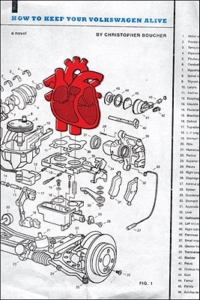 In college, I had a professor who urged us to interrogate a text by asking three questions of it, in order: 1) What is it saying? 2) Why is it saying that? 3) Why do I care? Christopher Boucher’s How To Keep Your Volkswagen Alive may be the text to confound all three inquiries. Which is not necessarily a strike against it. A book-length riff/spoof on owner manuals in general (and specifically John Muir’s 1969 VW guide of the same name), HTKYVWA takes great pleasure in dissembling and modifying precisely these sorts of questions; unscrewing the linguistic conventions one by one revealing symmetries and symbolisms that are quite moving at times, if always a little unhinged.

The attentive reader may recognize a few familiar characters from previous models such as Loss, Struggle, and Writing Itself, (the last of which now comes standard on most new novels) but the true protagonist of HTKYVWA is Metaphor. The author foregrounds Metaphor to such an extent that it often feels as though other characters and plotlines exist as pit stops – necessary for all highways but not sufficient to explain the particular shapes that the road describes. Boucher spends most of the book driving Metaphor as hard and as far as he can all around Western Mass, but the ride is bumpy and often frustrating. Metaphor, as you might imagine, breaks down with overuse. Luckily Boucher is a deft mechanic in many respects, possessed of a special skill to diagnose malfunctioning language by ear, to hear where words are misaligned or where a phrase is too worn to use.

Boucher’s auditory instincts are spot-on, and you have to admire his pluck and inventiveness in making repairs. But the fact is that the he has made some quick fixes in HTKYVWA – patching weak plotlines with equally flimsy material, repeating the same facile substitutions over and over (“money” becomes “time,” “love” becomes “faith,” etc.), or sometimes starting the book sputtering down the road without checking to make sure that the teeth of the themes are aligned – and this can result in some pretty grating noises from time to time.

Boucher’s Metaphor is all vehicle (the word, the image itself) and no tenor (the idea conveyed). What he has given us is a novel in which vehicles are constantly becoming other vehicles, shifting gears and taking off, only to be immediately replaced by more vehicles, until there are pages and pages full of vehicles crawling about, roaring, vomiting, being sweetly naïve one minute and tearing hearts out of ribcages the next, such that we never actually get a moment to stop and think about what is being said, and by whom. “It is at work everywhere, functioning smoothly at times, at other times in fits and starts… Everywhere it is machines – real ones, not figurative ones: machines driving other machines, machines being driven by other machines, with all the necessary couplings and connections.”

I would bet that Boucher has perhaps chuckled about this himself, as the novel’s climactic scene portrays our nameless narrator literally in conversation with a jazz band composed of a piano, bass, and drums; no saxophone. The narrator becomes tenor by proxy, recalibrating the rest of the novel’s metaphors around himself as the central figure. Thus despite its quirky surrealism, there is heartfelt emotion at the novel’s core, and it is worth your money to spend some time deciphering the machinery of the vehicle.