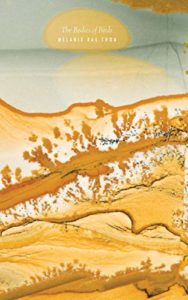 Standing in Andrew McCall’s installation “Dark Rooms, Solid Light,” in which a beam of light projected through a dark room becomes almost tangible, tactile, I suddenly remembered air — not remembering to breathe, or abstractly remembering our dependence on oxygen — but newly remembering that air is a physical body, that swirls and reacts to us like water. This moment, the sudden feeling that you are a body in concert with another, appears repeatedly in Melanie Rae Thon’s book ​The Bodies of Birds, ​as when​ s​ he writes:​ ​“The light of the late afternoon touching everything—my hands, my face, the wings of birds—illuminating edges of clouds—the kitchen a bottle of light, pale green filling with sound—”

The Bodies of Birds​ resituates the human into the environment, and pulls the environment back into the human. It is not enough to say that Thon “blurs” boundaries between human and animal, or human and world; rather, she kneads the human back into the animal, the animal back into the human, and this new folding, churning consciousness also finds itself unbounded in a dynamic landscape. Throughout the book, she presents the environment in abundance, a forever roaming, hyper focused description that fills the world of the poems with animals, with meteors, with destruction, with love, with radioactivity, with death. Her extreme attentiveness produces a magical density, where things once disparate are joined.

In the first of the book’s three pieces, “In the Exclusion Zone,” even a space ostensibly fully saturated with human interference (Chernobyl) becomes a site where Thon can present a landscape where categories of human, animal, and world are thoroughly interlocked. The machinery of Chernobyl has a heart, hidden by its “sarcophagus,” and the reactor “a scorched throat.” It becomes and acts as a body in the landscape, while a few lines later:

The storks appear as machines, beaks blinking like flashing red lights. Thon masterfully wields these reflected descriptions, so that syntactically the elements of the scene take on each other’s characteristics and reflect the seep of human-produced radioactivity into the ecosystem.

Thon performs a similar stretching of language in the book’s recurring attention to the body. Usually, when we say ​the body​ we mean a human body. If that’s not what we mean, we need to clarify: the body of a bird, the body of a bear. But Thon does not work in the realm of “usually.” She continually works at the anthropocentric bent of language as usual. For example, one refrain in the book comes in the line: “​Listen: we promise: every body dies: blood and breath, the same: and when we do, we die like animals.” ​The separation of ​every ​from ​body ​expands the latter into all bodies, from bird to human to architecture. Her working of language in the book frays its edges, giving it room to breathe and expand.

Thon does not just open up space in language itself, but also in how we understand who is speaking. In the second haunting and lyrical piece, she writes in the voice of an organ donor:

—I offered the gloriously pliable tissue of my thighs, a song moving through the spaces between cells, consciousness unstrung, bowels unspooled—continuous, miraculous, the bodies I am tonight, uncontained by multitudes.

This line of course recalls Whitman’s “Song of Myself” —“I am large, I contain multitudes”—but for Thon consciousness is not a container, nor containable. We do not flicker from one stable consciousness to another. Instead we find ourselves buoyed, redirected, and pulled through different but connected voices, never feeling the edges, for consciousness, in the world of the book, is boundless: “every particle of rain touches the face; everyone on earth is ours; anything on earth can happen.”

As part of its departure from an anthropocentric position, the book appropriately begins and ends with the absence and silencing of human voices. The first piece, “In the Exclusion Zone,” begins:

Twenty-seven years, and in the utter absence of human life, in the stunned silence of human voices,
red deer and fierce boar

flourish—in the Exclusion Zone,
in Chernobyl’s Zone of Alienation,
the wolf, the lynx, the bear find refuge.

The Exclusion Zone becomes a site to explore posthuman ecosystems, to see what fills the cavities created by human activity. For Thon, there is always language beyond the human, a time when the need for words is gone: “​We know not how it hurts, but we can promise you this: when the heart explodes again, we’ll need no words: / the wind and the rain will tell us.”

While the second titular piece, “The Bodies of Birds,” is less an extinguishing of voice than its proliferation, Thon picks up this thread in the final piece, “Requiem in the Rain.” The piece ends with the image of language washing away, visually mirrored as text is replaced by unspeakable dashed lines scattering down the page. She writes: “​Brother, what we hear now is the absence of human voices. Pine, wind, wolf, lily. We are unfolding the birds in the rain, letting the rain be the rain, letting the rain tear them, letting the rain wash the words​” and later ending with “​we will need no more words / ever.​” She suggests a language beyond human language, that into the silence created by the absence of human voices, a new language, beyond words, emerges.

Thon’s work thrives in places where our language is deceptive or deficient — death, geologic time, perception, experiences of consciousness — places which she enters fearlessly, resurfacing with a new path that describes the indescribable. For example, in “The Bodies of Birds,” there are moments of vast temporal expansion and contraction, the narrative unfolding through a cascading chain of dashes, a constant pulse:

The sun will rise and go down, the flesh be cleaved, the body opened—human hands will hold the human heart—the lungs, the liver—meteors will pummel the earth—the body of one will be many—ditches will flood and spill, rivers surge and roil—some of the bodies will swirl in silt, some gasp and breathe, some swim to shore—

In this one vatic paragraph, Thon conjures the immensity of experience, shifting from geologic time (“meteors will pummel the earth”) to the time of an instant (“human hands will hold the human heart”).

It is difficult to describe the book’s lyricism in any other way besides liquid metaphors: it swirls, it ripples, it eddies through its narrative waves. Most simply, it moves. The book is not statically expansive but dynamically expanding, it breathes and pulses, a river that cannot help but carry what it touches along. The three swirling pieces of this slim triptych ripple through each other, all deeply invested in sites of connection and transference. Despite its size, the book is impossibly spacious (and equally impossible to reduce), reaching across webs rather than presenting discrete ideas: trauma, the post-human space of Chernobyl, the language of the dead, the body, violence, ecological and personal trauma, consciousness beyond the human, the body beyond the human, gun violence, time, destruction, and loss. It is a fearlessly meditative book, one that seems to reach out endlessly without ever coming untethered.