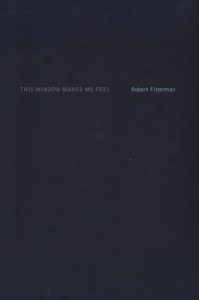 In Reading Uncreative Writing, David Kaufmann argues that Robert Fitterman’s poetry taps into today’s generalized mood of melancholic entrapment. In the post-industrial world of 24/7 competition and communication, many feel down but don’t exactly know why or what they can do to improve their lot. According to Kaufmann, a work like Fitterman’s long poem this window makes me feel, composed entirely of language repurposed from the web, is only able to respond to this underlying depression in “unhelpful and pre-fabricated ways.” The anonymous I (whose voice unifies and homogenizes the ghostly comments and confessions the poet gleaned from the internet) subjectifies the speaker, articulating her predicament in self-help platitudes, feebly asserting, for example, that “no matter what I am and what I’ve done, I do have a chance.” If only s/he could get a (better) job or a (better) partner – but would that be it? The speaker consistently fails to see the bigger picture, figuring her feelings of loneliness, vulnerability, and confusion as a private problem and a personal failing. Relentlessly bombarded by images of others’ happiness and success, she cannot help feeling lonely, inadequate, and small, even when she herself succeeds. Today’s triumphs, modest or momentous, always feel unusually fragile and precarious, either because poverty and exclusion are ever-present threats or because success forces one into an ever-narrowing path of glowing isolation.

For Kaufmann, this window is “adamantly non-therapeutic” in its refusal to resolve the inexplicable pain it seeks to express. If there is anything cathartic and liberating about the book, the scholar notes, it is how blatantly it demonstrates the collective dead end we have reached. But it doesn’t have to be this way, the book seems to say. According to Kaufmann, however, the hopeful side of the story is left implied or unarticulated.

In rushing to this dire conclusion, however, Kaufmann overlooks many of the subtleties that make the book so genuinely moving, in spite of its deadpan humour and mopey monotony. More than a droll sobfest or a gothic howl, the poem is a tragic ode to our age’s wasted potential, in Franco Berardi’s sense of the phrase, a force that has been dispersed and unproductively relayed. There is no doubt that the spectres that populate Fitterman’s poetry are spellbound by mainstream ideas of success, propelled by envious competition and narcissistic individualism. The problem is that this kind of (political) immaturity cannot always be cleanly separated from the childlike and soulful naiveté that shines through in passages like: “This window makes me feel like I need to learn how to play a musical instrument using an instructional video” or “This window makes me feel like I can see beyond my own problems and start to look into those of people who live here.” One feels, throughout the book, a raw eagerness to create and connect. This impulse, to be sure, rather often appears in a corrupted form, already hijacked by ideologies that feed on divisiveness and navel-gazing. But we get glimpses of what things might be like if such positive energy was more judiciously harnessed.

Something similar goes for the sense of groundlessness and permanent anxiety that pervades the text, no doubt associated with the ongoing process of de-industrialization and the proliferation of precarious forms of (self) employment. As Kaufmann puts it, it is unclear if Fitterman’s “Starbucks men” are sad because they are unemployed or unemployed because they are sad. Whatever the case may be, the speakers in this window feel persecuted by their own potential, which their circumstances force them to confront. Who are they, really? Others don’t know either and that makes their gaze terrifying. The possibilities are endless and that can be frightening, no doubt. However, there is, perhaps, a grain of truth in the conservative adage that the new economy fosters an exploratory mentality. Most affecting, after all, throughout Fitterman’s book is the speaker’s sincere (or naïve) desire to learn, experiment, and test her limits. It is the fact that these would effectively be laudable motivations if conditions were different and people did in fact stand a realistic chance of realizing their projects that makes this a tragic poem. Because they don’t, the chicken-and-egg cycle of self-doubt is bound to continue.

Finally, it should be pointed out that, in possibly misapprehending Fitterman’s stance in relation to the voices that speak through him (as one of empathetic detachment), Kaufmann fails to account for an important element of political critique one notices throughout. An important theme of this window is liberal/leftist guilt (a common topic in recent conceptual poetry), the notion that progressives casually and hypocritically indulge in or condone behaviours they should in principle be against: “this window makes me feel rich but what a contradiction because I loathe capitalist hullaballoo but crave Vegas”; “this window makes me feel rich as I engage in a nonessential and expensive habit”; or “this window makes me feel like I’m wasting fruit and this annoys the don’t waste fruit portion of my soul.” We do not get a clear sense throughout the book that Fitterman passes negative judgement on all the statements he collected. It might very well be that the poet is himself guilty of some of these peccadillos.

One of the book’s aesthetic merits is that it asks us to reflect on our everyday lives at the micro-level. Who, after all, hasn’t done things or had thoughts like these: “this window makes me feel like I sometimes see a guy on TV and compare myself to him” and “this window makes me feel cocky and powerful”? Although we know Fitterman is using someone else’s words, some of these confessions feel surprisingly intimate and personal. This kind of perspectival ambiguity crucially undermines any sense of ideological and moral security one might feel when considering the statements of the benighted souls relayed throughout, alternately touching and repulsive.

Ideological divisiveness is no doubt one of the poem’s central preoccupations: “this window makes me feel like if I enter a website that makes me feel uncomfortable.” One could say, contra Kaufmann, that Fitterman does not seem to think that people on the left are immune to the kind of moral decadence diagnosed throughout the piece. Sanctimonious disdain and disgust seem, rather, to be among Fitterman’s main targets, preventing the development of a sense of shared vulnerability and the identification of common concerns. Progressive readers don’t get to stand apart and feel good about themselves, to revel in the culture’s stagnation and the hopelessness of their cause. Yes, this window is no doubt a melancholic poem, a machinic lament for a lost future, but it is in no way an endorsement of the self-serving kind of pessimism that continues to fuel fruitless outrage and political paralysis.