A Swarm of Dust – Evald Flisar 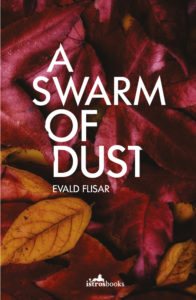 Tr. from the Slovene by David Limon

It would seem unambiguously desirable that more, rather than fewer, works of world literature be translated into English. But when the writer translated is largely unknown to most American readers and reviewers, and the literary tradition in which the writer works unfamiliar, how well-situated are we in fact to really appreciate the work in front of us, to feel we can adopt a perspective that allows us to assimilate the work even on a literal, denotative level? To what extent can we indeed plausibly claim to be focusing our attention on the text itself when the context needed to make the text fully intelligible might be missing?

These were questions that persistently arose as I was reading (for the first time) the Slovenian writer Evald Flisar. None of the books I read — including his newly translated novel (by David Limon) A Swarm of Dust and the other two novels in the author’s so-called “village” trilogy, Three Loves, One Death and My Father’s Dreams — could be described as conventional in their themes or their formal structures. But ultimately it would be illuminating to know if the sort of loose sequencing we find in these novels (as well as in Who Can Say Where the Road Goes, which I also read) is a narrative strategy more accepted in the Slovenian literary tradition and thus entirely recognizable to most of the writer’s immediate readership, or if the lack of observable plot would be seen as a challenge to prevailing expectations. Similarly, a greater knowledge of Slovenian history and culture in general might help us better understand the extent to which the themes of alienation, family conflict, divergent sexuality, and nihilistic rebellion would be familiar enough to Slovenian readers in their cultural and political history, or whether they are Flisar’s adaptation of familiar “Western” themes to a society suddenly and rapidly westernized.

It is not that the situations depicted or the strategies used in Flisar’s novels would be unfamiliar to most readers of the English translations, but that often they are indeed familiar enough that it seems merely presumptuous to judge them as derivative, when in fact in their cultural context the novels might be justifiably regarded as more audacious. In addition to the serial structure he employs, which moves forward without necessarily entailing “development,” and that frequently features purposeful gaps in chronology (creating a kind of drama by omission), Flisar’s novels incorporate surreal and absurdist elements — although the ultimate impression they leave is of an embellished realism — as well as Freudian psychology and unreliable narration. In My Father’s Dreams, the line between fantasy and reality, dreams and conscious experience, is blurred by relating the story through the psychologically displaced narration of its youthful protagonist, who may or may not be the victim of a deception contrived by his own father. The novels employ what could be called postmodern devices as well, such as the metafictional appearance in Three Loves, One Death of an “important writer,” who transparently seems to be Evald, and who, we discover, once wrote a story that eerily echoes events in the novel we are reading. A quoted passage from the story reiterates an earlier passage in our present narrative almost verbatim.

The novels in the village trilogy, although not strictly autobiographical, are portrayals of Slovenian rural life (although some of A Swarm of Dust in set in Ljubljana), specifically in Flisar’s native region. A particular focus is put in these novels on the Romany people of Slovenia, especially in A Swarm of Dust, whose protagonist is a young Romany university student. Here again it is difficult to know quite how to respond to Flisar’s portrayal of this character. Are we to regard him as the victim of his troubled childhood, which includes an incestuous relationship with his mother, even when his ultimate downfall is brought about by his own implacable refusal to accede to social and cultural conventions as a way of achieving “success,” a refusal that seems an assertion of personal integrity, not the psychological legacy of abuse? Although most readers are likely aware of the general cultural animus toward the Roma in European history (to some extent in the U.S. as well), the ambiguities in Flisar’s depiction here, and in Three Loves, One Death (in which the gypsy characters are portrayed as much shrewder than the family whose story is the ostensible focus of the novel) make it more difficult for readers outside the specific cultural context the writer has presupposed to feel comfortable with an interpretation.

A Swarm of Dust is certainly a compelling enough chronicle of its protagonist’s life story, however inscrutable at times. It begins rather shockingly with a sexual encounter between the young protagonist, Janek Hudorevec, and his mother, after which he also beats her. (He believes that this is what she wants, we eventually understand, since he had witnessed his father similarly treating her.) Even in a Roma village, Janek’s family is only barely tolerated, so that clearly Janek emerges from his childhood feeling like a misfit, and when the novel takes up in its second half seven years later with the 22 year-old law student Janek, he is involved with a fellow student, Darla, a psychologist in training, who attempts to intervene and assuage his now obviously volatile nature. Her efforts fail (it is unclear how much she is motivated by a professional interest in Janek’s agitated state of mind and how much by an unstated sexual attraction to Janek), and Janek returns to his native village, where his lingering reputation assures that the story will not have a happy ending.

Likewise the other Flisar novels I read feature episodic narratives that capture and maintain the reader’s interest through often extreme or puzzling situations, creating a certain kind of drama even though the episodes are only loosely joined and at times make abrupt chronological leaps, ultimately leaving a lingering impression of irresolution. This strategy seems a consistent and deliberate attempt to provide a comprehensive account of the lives lived by the characters they examine. (A Swarm of Dust and My Father’s Dreams are more centered around an individual protagonist, while Who Can Say Where the Road Goes and Three Loves, One Death incorporate a larger group of characters and their intersecting actions.) Among these novels, perhaps My Father’s Dreams, as a coming-of-age story of sorts (although a perverse one), would be most readily accessible to new readers, but with the other three, most readers should expect a representation of circumstances that are sufficiently different from their own, making an easily “immersive” reading experience problematic.

This might be especially true of A Swarm of Dust and its story of personal and cultural dislocation. Still, more so than, say, Three Loves, One Death, for which the immediate cultural and political context bearing on post-Communist Slovenia is really necessary to fully comprehend the characters and their actions, this novel does offer some more quickly graspable features in its somewhat sensational premise and in the implicit social critique expressed directly in the protagonist’s dialogue with his law school examiner late in the book. But whether Flisar’s performance will strike most readers as familiar enough in its fractured form and Freudian undercurrents to be accepted as recognizable practice in 20th century fiction, or whether the writer’s strategies seem too familiar, somewhat overwrought in an uncertain context, is a question for each reader to resolve. I finished A Swarm of Dust finally unclear about the scope of the writer’s ambitions: If Flisar is trying to bring Slovenian fiction into the mainstream of modern literature, the result is probably successful but finally unremarkable. If the principal goal is to depict elements of Slovenian society more honestly than was previously possible given the prevailing conditions of Slovenian history and culture during most of the 20th century, judging success here requires a perspective that literary criticism alone cannot attain.