The following is the preface from As Black As Resistance: Finding the Conditions for Liberation, copyright © 2018 by William C. Anderson and Zoé Samudzi. Reprinted by permission of AK Press. Available now from booksellers everywhere. 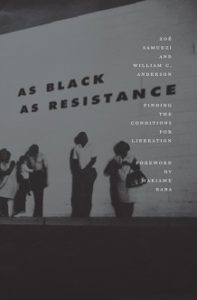 As Black as Resistance is a searing indictment of the U.S. settler colonial project and a call to action to save ourselves from the forces of oppression and tyranny. The philosophy of the book might well be summarized as “we’re all we’ve got.” This book appears in a chaotic time when the gap between rich and poor continues to grow, when climate change is causing mass devastation, when fascism appears resurgent, and when the ever-expanding carceral state is criminalizing and prematurely killing millions. In this context, William C. Anderson and Zoé Samudzi insist that our current political moment demands that we reject liberalism and embrace a more radical program to transform our conditions. They argue persuasively that grounding ourselves in the Black radical tradition offers the best path forward toward freedom and liberation.

In 1970, artist and activist Ossie Davis penned a preface for a reprint of the 1951 We Charge Genocide petition to the United Nations that contended with the historical de- basement of Black people in the United States:

We say again, now: We will submit no further to the brutal in- dignities being practiced against us; we will not be intimidated, and most certainly not eliminated. We claim the ancient right of all peoples, not only to survive unhindered, but also to participate as equals in man’s inheritance here on earth. We fight to preserve ourselves, to see that the treasured ways of our life- in-common are not destroyed by brutal men or heedless institutions.¹

Davis stresses, like Anderson and Samudzi do, that Black people have been consistently subjected to inordinate violence, considered disposable and easily killable. In the late nineteenth century, a remark was attributed to a southern police chief who suggested that there were three types of homicides: “If a nigger kills a white man, that’s murder. If a white man kills a nigger, that’s justifiable homicide. If a nigger kills a nigger, that’s one less nigger.”² White supremacy has always held Black life cheap. Davis’s words embody defiance and so do those written by Anderson and Samudzi. Just as Davis claims an inherent right to self-defense, As Black as Resistance highlights a long tradition in Black communities by people like Robert F. Williams, who invoked the right to armed self-defense.

In 1955, Williams joined the NAACP in his hometown of Monroe, North Carolina, after having served in the U.S. Marine Corps. He quickly became president of the chapter and rebuilt it to include many veterans, farmers, and working-class people. In 1956, the Monroe NAACP started a campaign to integrate the only swimming pool in the city. It had been built with federal funds, yet blacks were barred from access. City officials not only refused to let blacks swim in the pool, they also turned down requests to build a pool that they could use. Williams and the Monroe NAACP took the city to court. This engendered massive backlash from the local white community, including members of the Ku Klux Klan. The KKK held rallies, drove around Black neighborhoods intimidating residents, and fired guns at people out of moving cars.

When ministers asked local politicians to intervene to prevent the KKK from driving through Black neighborhoods and terrorizing residents, they were told that the Klan had “as much constitutional right to organize as the NAACP.” Williams and the NAACP petitioned the governor and even President Eisenhower for support and assistance. They received no help.

Williams and other members of the NAACP decided then that it was time to take matters into their own hands. If the government would not protect their communities, then they would arm themselves. The Monroe NAACP applied for and received a charter from the National Rifle Association. By the end of one year, their NRA club had over sixty members.

During the summer of 1957, an armed motorcade of Klan members got into a firefight with Williams and other NAACP members. The Klan had opened fire on the home of the Monroe NAACP vice president, Dr. Albert E. Perry. Williams and his colleagues successfully turned the Klan motorcade back. The incident would make national news and begin to bring more attention to Williams. In his book Negroes with Guns, he clearly lays out his rationale for advocating armed self-defense:

The stranglehold of oppression cannot be loosened by a plea to the oppressor’s conscience. Social change in something as fundamental as racist oppression involves violence. You cannot have progress here without violence and upheaval, because it’s a struggle for survival for one and a struggle for liberation for the other. Always the powers in command are ruthless and unmerciful in defending their position and their privileges. This is not an abstract rule to be meditated upon by Americans. This is a truth that was revealed at the birth of America, and has continued to be revealed many times in our history. The principle of self-defense is an American tradition that began at Lexington and Concord.³

Williams was an inspiration to Huey P. Newton who cofounded the Black Panther Party for Self-Defense in 1966 about a decade after Williams had assumed control over the Monroe NAACP. The Black Panther Party is invoked in As Black as Resistance, and we have a lot to learn from it. While liberals celebrate nonviolent resistance, we can’t forget that many Black radicals have advocated the use of violence in response to being attacked. As we struggle against a renewed fascism today, we continue to wrestle with these issues raised in the book.

As an abolitionist, the Black anarchism espoused by Anderson and Samudzi resonates with me. Abolishing the prison industrial complex (PIC) is not just about ending prisons but also about creating an alternative system of governance that is not based on domination, hierarchy, and control. In that respect, abolitionism and anarchism are positive rather than negative projects. They do not signal the absence of prisons or governments but the creation of different forms of sociality, governance, and accountability that are not statist and carceral.

In this respect, this work echoes the practices of anarcha-indigenism that differentiate inclusive models of indigenous nationhood based on inclusivity, horizontality, and interrelatedness from nation-states based on borders, exclusivity, domination, and control. Thus, the politics of abolition require us to see, as Angela Davis notes in Are Prisons Obsolete?, that prisons cannot be abolished without a complete restructuring of society. Abolitionism is sometimes disassociated from the larger political vision from which it emerges. However, the politics expressed in As Black as Resistance invite us not to simply critique prisons or the state but to imagine and then build alternative forms of governance that are life-giving. It is a book brimming with urgency and one that boldly confronts the injustices of our past and present. It is a book that reminds us of our power to collectively make transformative changes that will improve the lives of the many over the few. It is a book of revolutionary hope that pierces the despair and fear of our current political moment.