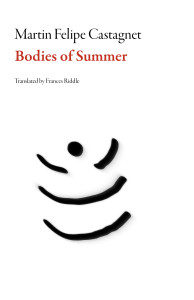 How would a revenge story play out in a world where death has become effectively obsolete? For better and for worse, Martin Felipe Castagnet is more interested in getting us to ask that question than answering it in Bodies of Summer. At its best Castagnet’s debut work, newly translated into English, artfully skirts overt philosophizing about mind-body relations and bio-/necro-politics, keeping this slim speculative novel at an athletic pace and leaving ample room for us to explore its marvelous world for ourselves. At its worst we’re left wondering where the hell we are.

In brief: upon death a person’s consciousness is uploaded to the internet, kept in a state where the dead “float freely along the web” until proceeding to the “second, optional stage of migration … from the web back into a physical body.” As this system of technological reincarnation evolved, “bodies came to be seen as a valuable natural resource. Funerals became a thing of the past,” inaugurating a new world and the new taboos attendant to immortality:

A woman in the body of a man dressed like a woman. A man burned into a new body rubs up against his sister until she asks for more. A nun commits suicide in order to be a priest in her new body. And sex always finds a way to reinvent itself despite limited positions and combinations. . . . The lines are blurred between forbidden and permissible; hierarchies are reordered again and again.

The only truly impermissible sin is to return to the body one dies in — to become, in the parlance of the Hindu caste system that the novel adopts, a panchama. “Some argue,” muses the main character and narrator, Ramiro “Rama” Olivaires, “that the law of nature dictates that you must change bodies after death; it seems that one prejudice only disappears once another arises to replace it.” Castagnet’s entrancingly deadpan style charms the reader down this near-future rabbit hole until a sudden bump reminds us that this is, before anything else, a world gone mad. “I know a man,” says Rama, “who wanted to name his child Bukkake, whether it was a boy or a girl. Names are the first thing to adapt to new circumstances.”

So much for setting. The main plot can be summed up in a line: Ramiro, one of the first to ever enter “flotation” after death, returns to physical life as a restive guest in the only body his family can afford, that of a “fat woman that no one else wanted,” carrying only what he calls “a desire so strong that it punctures my eardrums and bursts my appendix . . . to track down my former best friend, and to find out what happened to my wife.”

Simple enough, exciting enough — Bodies at its outset smacks of high-concept in the best possible way. But within just a few pages we realize that Rama already knows what happened to his wife: she’s dead. Old-fashioned dead. She had died of natural causes and chose not to enter flotation for reasons her family, including Ramiro, had known for nearly a century before the events of the novel. So the remaining mystery is to figure out why Rama’s best friend stopped all communication with him when Rama first entered flotation; unfortunately, it doesn’t seem like our main character is all too interested in finding answers, as he’s (forgive me) dead-set on revenge from the get-go.

This latter part of the novel’s primary plot only makes sense retroactively, to Rama as well as to the reader, leaving the protagonist’s homicidal motivation frustratingly incomprehensible throughout almost the entirety of the narrative. The cynic in me wants to chalk this up to Bodies of Summer being Castagnet’s first foray into fiction; my better angels want me to believe that maybe my confusion is supposed to reflect the broader absurdity of embarking on a vengeance-quest knowing success and failure would be largely indistinguishable. But that doesn’t quite cut it — it might even make the whole thing more frustrating. So should you bother reading a book where one half of the primary narrative is resolved within a few pages and the other half, in the worst way, just doesn’t make sense?

I may be hesitant to convince myself that Bodies is so many meta-levels beyond where it lets on, but the plot at least serves as a Trojan horse for everything that comes to unfold around it. While barely breaking one hundred pages Castagnet is able to not only construct a world as lived-in and unheimlich as those of Octavia Butler and Samuel Delaney, but he’s also able to craft wildly compelling subplots with themes ranging from mental illness, class relations, gender identity, sexuality, and even “cybernetic archaeology” without making any of it seem really “packed in.”

Like the shambling, lumpenproletariat panchamas driven to the graveyards on the city outskirts, Bodies of Summer’s real charm lurks not in its core, but on its fringes. It’s there that the reader finds the most to think about — without, notably, feeling like any definite opinions are being foisted on us by Castagnet or his characters — and it’s also there that the reader finds what’s frankly some pretty fucking awesome gore. The book is rightfully obsessed with the undead and leaves its reader haunted, despite its weaknesses. It manages, in the end, to strike compelling notes — the most interesting variation is posed at its outset: Can we still believe in ghosts in an age where nothing really dies? Castagnet leaves us to work out an answer . . . one which, positive or negative, will likely scare us.