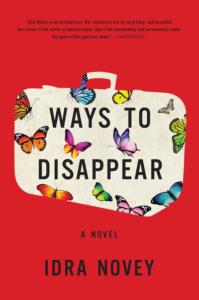 As happens from time to time with critically successful artists, it is almost a fait accompli that the world discovers disparities between the quality of the art and the quality of the creator. Privacy now turns public at startling speeds, and questions of whether art can, and should, stand apart from the hands that created it are becoming commonplace. It’s a tension that’s worth exploring, and not one without complexity. Should, say, the infamously bad parenting of Dickens, Cheever, or Hemingway alter the way we consume their art? Can a damning memoir from a child tarnish the legacy of her parent’s novel? Should it affect their positions in the canon?

This question hides in the background Idra Novey’s beguiling debut novel Ways to Disappear. When Beatriz Yagoda, household name, jewel of Brazilian literature, and absentee heart of the novel, disappears — she is last seen climbing into an almond tree, cigar in her mouth — it is pure titillation for Brazil. Occasional inter-chapter blips from Radio Globo stoke the fire, reminding the country of how beloved Beatriz’s novels are, and how essential she is to the national character. For the public, Beatriz’s vanishing act seems like an extension of her art and not what it really is: abandonment. It is exactly this tension, that between fan and family, that forms the heart of Ms. Novey’s novel.

From its start, Ways to Disappear is a thoughtful tropical noir with depth and feeling. It sets off with an email. Emma Neufeld, middling American translator of Portuguese, receives a mysterious email from Brazil. The sender would like to inform Emma that her client, Beatriz Yagoda, has disappeared. That’s all Emma, who has translated five of Beatriz’s novels, needs to hear. She packs a suitcase, waves away the objections of her boyfriend, and boards a plane. Quickly after she arrives, Emma learns that the mysterious tipper is, in fact, a loan shark, threatening to find and kill Beatriz — and, eventually, Beatriz’s family — if he is not paid what she owes him. The facts of that debt are curious, and humanize Beatriz in painful ways. What follows, as the novel leaps breathlessly from one scene to the next, is a fast-boil thriller that evokes, as Ms. Novey does herself later in the novel, that holiest of rules for fiction: Chekhov’s gun. To that end, Ways to Disappear is full of gorgeously rendered action.

As the search for Beatriz expands, and the threats and paranoia build, the difference of approach between Emma, zealous fan, and Raquel and Marcus Yagoda, Beatriz’s children, complicates. We learn that Beatriz, a colossal talent, was a wet sack as a mother, prone to spending days in bed, “lying there, still as a crocodile with her reptilian-green eyes, listening if Raquel spoke, but unwilling, or unable, to answer.” For Emma, Beatriz’s disappearance is shocking, but also fun: at one point she buys a garish feather-tipped hat, playacting a kind of Carmen Sandiego. The blurring of the boundaries between fan and artist seduces her. In a private moment, Emma “[picks] up her author’s brush and [pulls] it through her hair,” an act that sends her reeling. And Marcus, for his part, is distant, perhaps better able to compartmentalize the pain of his mother’s disappearance. Not so for Raquel, who is wracked with fear.

In one astounding scene early in the novel, Raquel finds two hundred pages of what might be an unfinished manuscript of her mother’s. After some hesitation, Raquel wills herself to read. The hesitation is founded: Raquel had “always known if she read her mother’s fiction it would be devastating or alienating or both.” Ultimately, she can’t bring herself to finish reading the pages, not because she finds it too emotionally draining, but rather because it’s unconscionably tedious, a kind of compulsive, Borgesian exercise in seeking truth in language and detail. The work of “a broken person, somebody too bewildered by her own thoughts to punch in anything but nonsense”:

The novel was set in the seventies, the pages alternating between the same two scenes again and again. In each telling, the scenes devolved into long stretches of random numbers and letters as if her mother had lost control of her hands . . . The first scene took place at Cine Paissandu, the movie house where artsy types had brooded and commiserated during the dictatorship. In every version of the scene, something went wrong with the film: the reel broke or the sound system started to garble. While the audience waited for things to resume, the woman stepped into the alley behind the theater for a cigarette. The other smokers headed back inside, but she was too restless to join them. She sat down on the step for another cigarette in the alley, assuming she was alone. But she wasn’t. There was a shadow. It drew closer and — The sentence stopped, unfinished. After a page break, the same scene began again with the same woman alone in the same alley . . .

In each version of the scene, a tiny detail is altered, from the dress the unnamed protagonist wears, to the hand that holds her cigarette. An obsession with language, with detail, comes to the forefront, a theme that Ms. Novey addresses with grace. To be sure, the prose is enigmatic, the implications of which, when they are revealed, tragic — nevertheless, it is a runaway indulgence, evidence of a mother who spent more time with her art than her children. Only once do we get Beatriz’s perspective, in a span of several chapters as moving and intense as anything written in contemporary literary fiction. What we learn about her we learn through the people who know her best: namely, that there are other kinds of absences beyond the physical.

If all of this sounds bleak and overly-serious, fear not. Ms. Novey sets this multifaceted interpersonal network in the context of a true caper. Her prose is surprising, working its magic without ostentation in a way that makes the best lines feel like joyful ambushes. Ms. Novey’s background as a poet and translator gives her the knowhow to switch between genres and forms in a way that would feel kitsch in the hands of a lesser novelist but here are invigorating. An MFA workshop would berate Ms. Novey for pulling away from certain scenes of note by switching to poetry, play-like dialogue, or wry dictionary definitions, but, because she is so skilled, these tactical transmutations only heighten the emotional gravitas of the scenes they are relaying. That they all add up to such an emotionally satisfying ending is to the tremendous credit of her control of craft.

There is a song sung on Passover that would undeniably be familiar to the Jewish Yagoda family of the novel. Dayenu, translated as “it would have sufficed,” is an affirmation that if God had only done this one thing for the Jews, it would have been enough. If God had only brought them out of Egypt, it would have been enough. If God had only parted the Red Sea, it would have been enough. At the end of Ways to Disappear, Ms. Novey poignantly inverts this idea, as her characters list the minor things they wish they had done. If they had only done this one thing, perhaps everything would have worked out differently. It is a moment of acute remorse. But the true stinging brilliance of this inversion lies in what the reader is able to perceive as the reality of these grievances, that these shoulda-woulda-coulda’s are the manifestations of a misplaced sense of guilt. The characters that wish they had done something differently are not the ones that did anything wrong in the first place. And in the absence of a true apology from the famous writer-mother, the characters — Raquel, Emma, others — beat themselves up unfairly for wounds caused by Beatriz. This tragic self-flagellation is evidence of what might be the mission statement of Ways to Disappear: that in the real world, and particularly in this fictional noir universe, moral ambiguity reigns supreme, and blaming the artist is beside the point. Indeed, Beatriz is never identified as a villain — and perhaps she’s not one at all. The real issue is that in the transmission of art from creation to intake, there is something volatile, something that cannot be flippantly disregarded—and by setting the art/artist question to the side, we can examine that transmission for all of the violence — and, in the case of Ms. Novey’s fine debut, the glee — entailed therein.

Zachary C. Solomon is a writer and adjunct professor of English at Brooklyn College. He lives in Brooklyn and recently completed his first novel.