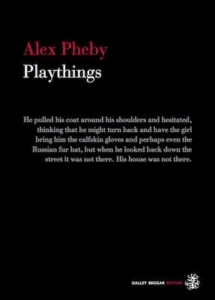 The contemporary novel rarely grapples with madness to such a direct and dedicated extent as its modernist forebears; psychological novels which reflect and explore the mental burdens of contemporary existence abound, but those that attempt to represent and unravel the breakdown of an individual’s sanity are much rarer beasts. Alex Pheby’s Playthings is therefore in many ways a throwback; a novel which takes as its protagonist a 19th century German judge named Daniel Paul Schreber who suffered from paranoid schizophrenia, and who became an inspiration for one of Freud’s most influential psychological studies.

Pheby’s novel takes Schreber’s breakdown as its starting point, and uses his story to powerfully depict the radical disjunctions of a schizophrenic mind descending into insanity, offering a complex multi-layered account of madness which shatters linear conceptions of time and perspective. In so doing it harkens back to a modernist obsession with mental well-being which went hand in hand with radical literary experiments in form and perspective. Playthings is however not a cold, clinical work, nor is it an unceasingly harrowing read, despite some moments of psychological horror; it is imbued with a dark but humorous sense of the absurd, which brings it closer to the writings of Kafka than Freud. It is in some respects a comedy of manners, employing satire and parody in its depiction of the tightly wound high society in which Schreber moves, of which his long suffering wife Sabine is perhaps the epitome, and his abject transgression of all the boundaries that society relies upon.

Pheby crafts his vision of a mind completely fracturing through a series of shifts in perspective which serve to instil a sense of delirium in the reader. The novel is told in the third person, but Pheby plays with the degree to which he cleaves to the judge’s perspective, and the degree to which that perspective represents reality or the trailing wake of Schreber’s madness. The reader is largely offered the judge’s more lucid moments, with only hints of what occurred during his episodes of complete insanity and with no idea of how much time has elapsed between sections. Reversals of perspective are subtly woven into the narrative, and offer a vertiginous twist every time the realization that we have been taken down a blind alley becomes clear. Events that seemed only days ago turn out to be months in the past, whilst characters are revealed to be figments of Schreber’s psychosis, or to be playing a role entirely different from the one Schreber imagined.

Thus the line between madness and sanity is blurred, and the reader can never know quite which side he or she is on. This vertiginous shift in perception is one of the joys of this shape shifting novel, as it perpetually plays with the reader’s scope of insight, first widening, then narrowing, until we are never sure where we sit. This is both a pleasure and a challenge, as the reader is quite appropriately the writer’s plaything – in a way that Pheby makes entirely clear in the explanatory preface amended to one of the chapters: “the attentive reader is left to wonder as to the ontological status of ‘Muller’ and ‘the Jew’ in a world overdetermined by a madman’s delusions.” This admission of writerly manipulation of “reality” does not come across as purposelessly meta-fictional or ostentatious, but as evidence of the pervasive ambiguity that surrounds Schreber, both in his own life and in Pheby’s depiction. These games with perspective never become trying, perhaps because it is also possible to be swept away by the momentum of Pheby’s prose, which can be breath taking in its depiction of the sudden shift in perspective from sanity to its obverse, as in one of the earliest depictions of Schreber’s breakdown: “ . . . now it was nothing to him, because they were all nothing. Fleeting-improvised-wretched-plaything-human-beings. Puppets, soul-less automata, clicking and whirring and chirruping to each other on a flat street of false houses and dust blown by the perishing cold wind.”

This is a psychological novel which thankfully resists straightforward psychological conclusions, leaving us guessing as to the final ontological status of Schreber, but the ghost of Freud nevertheless haunts it, particularly in its representation of Schreber’s sexual confusion — driven by a traumatic experience of rigidly enforced gender boundaries as a child. The repressed trauma of his youth, and the caterwauling madness of his adulthood, are all brushed away by Schreber in his moments of lucidity, only to come tearing back through the texture of the novel as his memories overlay his contemporary experience. The novel’s depiction of madness orbits around the concept of a trauma that can unseat even the most seemingly successful lives, the inability to cope with the sufferings of your loved ones, or the failure to incorporate the breakdown of normality into your life. Schreber’s response to his wife’s stroke is thus typical as it reveals his inability to process grief: “‘That is not my wife,’ Schreber said to himself.” Pheby’s primary accomplishment is to depict a man wrestling with his demons without ever explicitly expressing that struggle, leaving it to the reader to connect the dots between trauma, insanity, guilt and perception. Thus he embodies Schreber’s own repression in the fractured form of his novel, showing that we can never know what is lurking beneath the surface of apparent normality.

Whilst its opaque perspective draws on modernist tropes of disruption, Pheby’s novel is also crucially a historical novel, and through its depiction of real life events it offers a perspective on the upheavals of the century subsequent to Schreber’s own. Playthings fleshes out and fictionalises the mental breakdown of a man who would become a psychological paradigm for the 20th century, and who would be made to express many of its most profound psychological conditions. Thus, in Schreber’s fluctuating mental state it is possible to chart the pathologies of that century, including anti-Semitism and fascism, and to trace some of the psychological roots of those pathologies. Pheby links Schreber’s mental anguish to his authoritarian, disciplinarian father, who enforced an ideology which celebrated robust health and masculinity, which was defined through opposition to effeminacy, disability, degeneracy and perversion. This ideology, and its torturous application on Schreber and his siblings, could be considered a form of fascism avant la lettre. As writers like Canetti and Deleuze and Guattari have pointed out, Schreber’s paranoia can perhaps be considered an early manifestation of the paranoia of fascism, and his breakdown an instance of the pathological nature of that ideology, as it tries and fails to suppress the “other” within. In Pheby’s novel, it is possible to read the shifting constellations of suppressed trauma, paranoia and persecution within Schreber’s wavering consciousness as an oblique reflection of the mental framework of fascism, and of his own culture’s struggle to define its self-identity, which would erupt in unimaginable violence half a century later. In Playthings Schreber’s insanity becomes symptomatic of a more profound social malaise, and the novel offers a prism through which we can view the unfolding psychological landscape of the 20th century, as embodied in one of its emblematic precursors.

Thomas Storey lives in London, works for an independent publisher, and occasionally studies for a PhD in literature and digital media theory. He can be found on Twitter @trstorey.