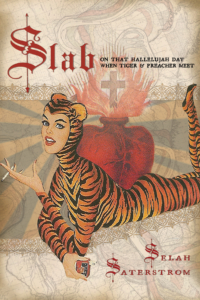 Early in Selah Saterstrom’s Slab, the narrator and protagonist, Tiger, tells the story of her life-changing striptease. After reading a book on profound women, Tiger decides to pay homage to Helen Keller. She buys a thrift-store Holly Hobbie dress and an Ace Hardware bucket to use as a prop. The deejay introduces her as “Miss Killer.” Tiger stumbles on stage with her eyes closed and performs the most famous scene from The Miracle Worker. She tells us,

The performance ended when, having completed the transformative contact with the pole/well, I arched a joyous backbend. The music came to a halt. I popped up, raised my bare chest to the audience, arms open. Water, I said.

As I read this scene, I couldn’t help placing myself in the audience for the striptease. Tiger works in a low-rent club in rural Mississippi. It’s the kind of place that only people who’ve spent an inordinate amount of time on the working-class side of the rural South would know firsthand. For better or worse, I’m one of those people. I have no trouble picturing myself at a chipped-linoleum table with a can of yellow American beer in front of me and poverty and desperation oozing from the dark paneled walls and buzzing neon signs, watching a stripper grope across the stage in a fantasy only accessible to her. It’s an intimate moment. A poignant one if you can release the illusion of a complete understanding and just recognize that something powerful and painfully human is being communicated to you.

On a meta level, this scene is instructive to the reader. You’re in the audience. Tiger is on a stage — more literally a slab among the aftermath of Hurricane Katrina — performing for you. Sometimes she tells you what she has in mind and gives you an interpretive framework to understand her art. Sometimes, you’re in the dark and just have to go with it. Either way, you can find comfort knowing that Tiger (and Saterstrom) have a method to their madness. It all makes sense — not necessarily to you — but to Tiger at least. And, at the core of the performance, Tiger is out to entertain you.

Any summary of the book will elucidate the challenges it presents to its reader. The novel is laid out like an extended playbill. Each chapter is a scene in a performance by Tiger while she stands on the slab of a house washed away by Katrina. Ostensibly, Barbara Walters is in the audience for this performance. At times, Walters asks questions or Tiger addresses her directly. At other times, it’s easy to forget Barbara Walters is there and Tiger abandons traditional narratives. One chapter is titled “Tiger Draws Some Rebel Flags.” The chapter consists solely of illustrations of rebel flags. Another chapter is titled “Tiger Riffs on the Classics: Now I Lay Me Down to Sleep.” It’s a prose poem that surrenders story for language play:

The whole novel plays with form. Some pages are only a sentence or a paragraph. There are sections laid out like stage directions that give no stage directions. The “Players” section of the playbill gives little information about the players. Slab could be categorized as a novel or an extended prose poem or a script for an impossible-to-produce performance art piece. It’s all of those things and more.

Any summary of Slab is also a bit misleading. Works that sound difficult typically sound like a chore to get through, and Slab is not chore. It’s fun from beginning to end. Because it’s so inventive, so different from standard novels, comparisons are hard to come by. The closest I can come is Richard Brautigan’s Trout Fishing in America. Both works have a poet’s ear for language and a comic’s feel for timing. Both are disjointed but somehow whole. Both have a tendency to dazzle and frustrate the reader. When I finished my first read of both, I knew second, third, and possibly more readings of the books would come.

Beyond all the experimentation, Saterstrom’s (and Tiger’s) talent for storytelling carries the work. Saterstrom gives voice to one of the American untouchables. It’s a complicated, beautiful, whimsical, troubling, and heart-breaking voice. It’s a voice that you can’t turn away from, not because it’s a spectacle, but because it’s art. Tiger tells the tale of how she went from a poor, rural stripper to a performance artist, but this is no rags-to-riches story. There’s no reason to believe that the transformation happened anywhere outside of Tiger’s head. All of her work as a performance artist is done in low rent strip clubs. She starts in rags and ends in rags. By her own description, she’s “a stripper who worked in what could only be called a ‘sub-genre’ way.” And, despite the temptations her occupation holds for a novelist, Saterstrom resists any urges to make Tiger a spectacle or a metaphor. Tiger is a deep, rich character. She has close ties to her reconstituted family. She understands the complexities of American South, interacts with troubling views on gun ownership, racism, and Confederate fetishes, yet still feels an affinity to her southern Mississippi homeland. She mourns her grandfather’s suicide. She meditates on dogs. She struggles as an artist and a woman. For all the distance she creates by telling her story on a slab while the reader sits in the wreckage of Katrina, Tiger feels human. Saterstrom’s ability to make Tiger so human carried me through my first reading of the novel.

Saterstrom’s choice to set this novel against the backdrop of Katrina is telling. She doesn’t discuss the storm much directly. She avoids tales of want and looting, starvation and death. Still, this context undeniably surrounds the novel. It raises questions about Katrina and its place in our collective memory. Certainly, we’ve faced bigger and more destructive storms in our lifetimes. As global temperatures continue to rise, we’ll face more of them. Yet Katrina — which was neither the first or worst of these recent storms — haunts us. And Tiger as the narrator to this storm helps explain the undercurrent of this haunting.

We have a term for women like Tiger. It’s white trash. Thirty years of political correctness have eradicated every longstanding, hateful term from our speech except white trash. Understanding Tiger as trash — a disposable person — helps explain the real tragedy of Katrina. The storm wouldn’t have done nearly as much damage if the levees around New Orleans had been repaired when they started to falter years before Katrina struck. And they probably would’ve been repaired if wealthy people lived near them. The aftermath of Katrina could’ve been mitigated if a combination of state and federal agencies had reacted like they did when Hurricane Andrew pummeled wealthy sections of Miami in 1992 and Hurricane Sandy hit the shores of New Jersey and New York in 2012. In short, the disaster would’ve been far less of a disaster if, culturally, we didn’t classify poor people as trash and see them as disposable when nature lays waste to their homes and leaves them with nothing but the slab once the water recedes.

During a short stint in juvie, Tiger takes a class in the art of Japanese flower arranging. She learns that, “At the moment of its extinction, the flower is perfect. It is in accordance.” Her teacher tells the story of a monk who gathers the debris from a storm and makes an arrangement of the trash on the temple altar. The monk explains, “I am practicing the art of decay appreciation.” These ideas, in a sense, give passage into Slab. Saterstrom is gathering the detritus of Katrina, narrating it through someone who is culturally viewed as trash, examining the rural American South on the verge of its extinction, and practicing the art of decay appreciation.

None But the Righteous – Chantal James