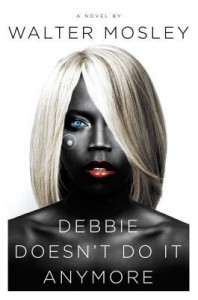 Walter Mosley starts his latest novel ass-backwards, with a climax. An author of forty-something books decides to get kinky with the structure to keep things fresh. Not that anyone’s accusing him of going through the motions. His porn star protagonist Debbie Dare, more experienced and inured than her creator, is performing in her most recent of thousands of such scenes, and a funny thing happens on the way to the money shot. She becomes a person. As ice melts from his sex worker’s heart of gold, Mosley faces down fictional precariousness, daring to dream his readers’ impossible dream: Debbie has an orgasm while the cameras are rolling. True to his name, her costar Myron “Big Dick” Palmer finds “the one spot in my entire sex that still had sensation,” Debbie confesses, in an intimate first person.

“The only option open to me was to let go of consciousness while (director) Linda (Love) and her producers tried to figure a way to save the shot and all our paychecks.” Debbie revives and is taken home by a friend, only to find her husband, also in the industry, fried in their tub with an under-aged girl and a plugged-in video camera. At first, she takes it all supremely even-keeled because her heart is still in the thawing stage. Staving off intrusions from brutal loan sharks and an understanding police lieutenant, Debbie dives into financial affairs and final arrangements for her departed Theon “Axel Rod” Pickney, whose shadier dealings and big spending, with her signature, left them both “in hock.”

Seasoned fans of Mosley might recall the financial predicaments that force his famous World War II Army veteran sleuth Easy Rawlins to take on under-the-table assignments and “favors” in the criminal underworld of mid-century Los Angeles. Debbie Doesn’t Do It Anymore offers a taste of this world in the present day, depicted in similar, gritty language; but while Easy gambols between the blurred regions of lawful landlord and illicit fixer, Debbie attempts to disentangle herself completely from both her official occupation and her husband’s iniquities. Following her husband’s death, Debbie won’t return calls from her whip-cracking director, and she announces to her workplace colleague Lana Leer that she’s quitting the business.

Like Easy on the tail of a missing person, Debbie pursues her lost innocence. She hacks away her bleached-white hair and loses her blue contacts, leaving her eyes their natural brown to match her skin. She begins referring to herself as Sandra Peel, her given name, but as with many workaholics, there’s a danger that in canceling out her employable identity there isn’t enough of a person left to survive, let alone care for the five-year-old son she stashed away with her extended family. Debbie Doesn’t Do It Anymore isn’t as Easy Rawlins as the sexy dame on the dust jacket leads on, and the noirish Easy trappings that surround Debbie on her slow ascent toward reclaiming Sandra Peel tend only to twist the knife in the wounded former self she tries to recover after long years of hard labor. The .32 caliber midnight special she carries in her purse from the accountants to the funeral home to her beautician could, on a dark whim, just as easily finish her off as cut down one of her husband’s thuggish collectors.

Mosley evokes the large-scale economic wreckage of which a predatory sex tape industry is only a symptom, tracking Sandra/Debbie as she delivers the bad news to her mother-in-law and the home of the 16-year-old who died with Theon. She doesn’t let on to the police that she knew the girl as Jolie Wins, a wannabe trying to break into the business who had already fallen into a scummy sex and drug-fueled party scene. Meeting Jolie’s drunk mother and incapacitated father in the dingy living area of their destitute trailer, Debbie sees the motivation for so many of her fellow workers: “That room was why I fucked ten thousand men and women on four continents. Thousands of us boys and girls had run screaming from the same filth and stink of poverty.”

The trimmed lawn, patio and leaf-clogged empty swimming pool at the Pinkney residence indicate a modest economic improvement over Jolie’s origins, but conceal the violence Theon suffered in the form of routine beatings by his drunk father. Discovering oneself at a four-year liberal arts school wasn’t in the books for this crowd, although Mosley’s heroine maintains a halfway contemplated life with her own reading (more than half a dozen times through her favorite, Dead Souls). Sandra Peel’s own family, stably guarding her child, is no more supportive of her lifestyle. And while in the two previous cases the depravity of the straight world begs the question of their censure on those who choose to flee it, the close-knit, church-going Peel clan informs the humane spasms that charm Debbie’s recollections of her career in tender flashbacks of Theon’s and Debbie’s courtship, as well as current reminders of the compassion put to practice among Debbie and her guild. When she rear-ends a Saab with Theon’s Hummer, the young driver goes into a seizure and Debbie takes him and his pregnant wife to a clinic run by Neelo Brown, the son of “a real porn star out of the eighties.” Here we get the story of how Debbie and four of her coworkers salvaged the promising Neelo, putting him through medical school after his mother died of pancreatic cancer. He returns the favor by starting a special private insurance plan for porn stars. Such are the whispers of redeemability issued through Mosley’s bombshell Bartleby.

Taking account of the hardboiled mode that is his métier for Harvard’s A New Literary History of America, Mosley first calls to attention the “hardboiled state of being” before celebrating “the beauty of the language that holds our world the way a bright and shiny stainless-steel garbage can houses maggots and rats.” Given the size of his audience it’s germane to recognize the theory-wise sophistication of his statement in its refusal to acknowledge exterior referents. Mosley’s career is the paradigm for the movement risen alongside it to eradicate high-low cultural distinctions. That’s not to say too much isn’t likely being made here of Debbie Doesn’t Do It Anymore, thanks to Mosley’s iron grip on form. Where even Chandler is forgiven his baroque flourishes, an adept heir like Mosley never veers from the immediate action or utterance.

The jacket flap sells Debbie as a “literary novel,” but this is a message to libraries (“Fiction,” not “Mystery,” or worse). Systems novel fantasies are left to the readers, the only kind of investigation the text supports: the body of Theon Pinkney (Thomas Pikkety?) is only a mere catalyst — a shaggy, or shagging, dog. Lending a full voice to an oblique social conscience must wait until the end of the book, given by Debbie in an improvised eulogy that resembles Mosley’s political writings. Though he has several other experimental works to his credit, the hardboiled inflection defines the prison walls Mosley chooses to inhabit for this attempt. Or do the economics of the book industry, the contract on this particular project, prohibit him from saying more? We can only infer the excess indignation curbed by the author’s sensible ear. “The hardboiled condition is when a man or a woman, or an entire nation of women and men,” says Mosley, “is pressed to physical, emotional, economic, or intellectual limits — past, present and for the foreseeable future.” Debbie’s rut is Mosley’s trough. And their language of shared frustrations holds a world that is all too familiar to the rest of us.

Allusions to Neelo Brown’s mother and the older Theon’s heyday concerning the good old days of “real porn” hint at disruptive elements never named but easily understood by the contemporary reader. The Internet, corporate consolidation, money’s colonization of democracy, and a steady advance against dignified labor and wages leave workers pining, surprisingly enough, for the Reagan days! Universal access to pornography, as with any other new media content (books included — Mosley has recently sacrificed two ebook originals down the memory hole), necessarily changes the businesses model and imposes new demands (not always in the talent’s favor). The tension is perhaps never so dramatic as in pornography, when the analog instrument being digitized is the body. Here we find a resurfacing of the old high modernist anxiety of the individual subject, which Fredric Jameson memorably ascribes to Edvard Munch’s The Scream, a mood that is “no longer appropriate” under the feelings-agnostic aegis of global late capitalism. Evolved communications intensify and regularize commerce’s efficient gains in all-too-alienating differentiation. A recent piece on Jezebel, for instance, describes the Web-accelerated interest in “extreme” acts focusing on very specific parts of the anatomy.

As the mainstream “straight world” minimally relaxes its sanctions on perceived deviance — a growing tolerance for same sex marriage, the sex tape as viable entree to a national stage — moralizing concern for the indignity of mercenary exhibitionism shifts to the edified cause of public health. The novel strikes this organ chord fittingly at Threadley Brothers Mortuary, when the grieving widow recalls the “inordinate amount of time and money” spent there due to the “frightening regularity” of “STDs and cancers, some murders and a nauseating number of suicides, drug overdoses, and the odd death that even the county coroner couldn’t explain.” The human toll and associated risk are absorbed by survivors, pricing them out of alternatives. “If I still had the money we’d spent at Threadley’s I could have retired and moved to Wyoming, where the cost of living would have fit my purse,” she speculates. It’s possible that the sanctimonious neglect by the larger society might contribute to the risk for porn stars, but the real indignity Debbie suffers in front of us is the stiff refusal she meets when, empty pockets inverted, she asks Threadley’s mortician for a deal. Instead they do her the favor of cold-calling the guest lists of all her other friends’ funerals to scrape up the dough. Business, after all, is business.

Debbie was never going to retire to the mountains while Theon was alive. He was her ticket into her profession, and their love is part and parcel of her situation. Her exploitation was always systemic, never personal. If Mosley is celebrated for contributing to the plurality of previously unheard voices in American fiction, his frustration with the American situation is this triumph of diversity’s attendant isolation. Deploying the language of addiction recovery in his mostly plainspoken 2011 treatise Twelve Steps Toward Political Revelation, he diagnoses an acceptance of low standards thriving in part on the reduction of the United States’ “denizens” (not “citizens”) to “monadic particulates.” I wonder if this dominant taste for fiction to particularize (the only alternative, a spooky transcendent empathy) isn’t the queen bee in Mosley’s fedora. Killing Johnny Fry follows a book translator, Cordell Carmel, who, with the help of an adult film DVD, recalibrates (to say the least) existing and potential relationships with his cheating longtime girlfriend, his neighbor, and others. Debbie takes the reader on the other side of this expressive impasse, in yet another character sketch of a mean denizen, to prove the final indignity of a writer in these times, no matter how great he is. The unflinching system he hazards to free her from is simpler, more mechanical, than its fictional translation.

Folding the Red into the Black – Walter Mosley