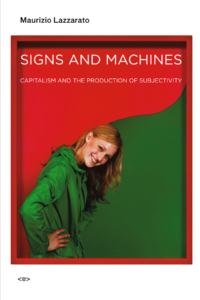 Tracking down texts that gracefully bridge theory and praxis can be a thankless quest. In most cases we’re caught on one side or the other: tackling either sprawling philosophical abstractions or over-specific studies trapped in a singular historical moment. One never touches ground while the other never sees the sky. Yet every so often we stumble upon a remarkable book which somehow manages to toe the line between these two camps, if not balancing their influences, at least drawing clear lines of contact. Such a book is not necessarily one which flawlessly and meticulously transposes the philosophical onto the everyday, but rather one which points out their preexisting intimacies, provoking speculation and connecting ground and sky rather than struggling to collapse their distance.

Maurizio Lazzarato’s recently translated Signs and Machines: Capitalism and the Production of Subjectivity falls somewhere in this sphere, effectively balancing and joining critiques of contemporary capitalism, complex philosophies of subjection (or the complex social production of individual subjectivities), and everyday existence, touching current western politics, yet preserving a general openness and applicability. While in essence a theoretical text, Signs and Machines manages to translate abstract systems of micro-politics and semiotics into clear contact with a more grounded reading of affect, the body, and the political potential of any and every given subject, retaining a broad scope of accessible praxis.

Lazzarato, an Italian sociologist perhaps best known to American readers for his theoretical works on immaterial labor and debt in The Making of the Indebted Man, avoids the temptation to simply resituate comfortable theories of the production of subjectivities, and instead calls into question the current stability of this production, or subjection, itself. Lazzarato explains subjection as the ongoing process by which an individual is shaped and crystallized by the mechanics of his or her surrounding socio-political discourses. In brief, it is the production and positioning of individuals within social groups and identity categories. Not taking this process for granted, rather than simply asking “how does capitalism form us as subjects?” Lazzarato poses an additional question: “how functional is this formation?”

For Lazzarato, the current wave of western neoliberal politics has lost track of the intimacies between political and subjective economies, leading not to cohesive systems of production and ideological coherence, but to a great deal of isolation and social entropy stemming from overwrought philosophies of entrepreneurialism and individualism which disrupt social solidarities. The “weakness of capitalism,” writes Lazzarato in his introduction, “lies in the production of subjectivity. As a consequence, systemic crisis and the crisis in the production of subjectivity are strictly interlinked.” In Lazzarato’s mind, as neoliberal politics inevitably lose control over the production and organization of collective subjectivities, sociability itself slowly dissolves:

The autonomy, initiative, and subjective commitment demanded of each of us constitute new norms of employability and, therefore, strictly speaking, a heteronomy. At the same time, the injunction imposed on the individual to act, take the initiative, and undertake risks has led to widespread depression, a maladie du siècle, the refusal to accept homogenization, and finally, the impoverishment of existence brought on by the individual “success” of the entrepreneurial model.

Lazzarato uses this moment of crisis as an occasion to reconsider the functionality of subjection in society at its weakest point. Since Lazzarato sees the coherence of neoliberal subjection caught in a state of unworking or reconfiguration, its critical reassessment is at its most timely. It also calls for a methodological revamp.

Lazzarato’s primary complaint is that the lion’s share of his contemporaries’ critiques (Jacques Rancière and Alain Badiou are cited most frequently) fail to incorporate the vast systems of social and symbolic mechanics that envelop and guide the political subject through life and (re)generation. A successful taxonomy of these mechanics necessitates a departure from a basic anthropocentric critique of capital in favor of a more abstract approach. Lazzarato’s project is thus (under the principal guidance of Félix Guattari) to recast the subject upon a mechanical plane, as both sentient personality and blissfully ignorant lynchpin in the machinery of capitalism. The grounds for such a critique are set by establishing a basic distinction between social subjection, or the effects of the complex of social/symbolic institutions that assign us complex identities (gender, nationality, class, etc.), and mechanic enslavement, which signifies the complex of social and symbolic systems mentioned above. The cultivation of the subject, for Lazzarato, occurs precisely at the juncture of these two systems, so that’s where we ought to look to find spaces of potential change and spontaneity.

The pursuit and unveiling of these spaces spans the entirety of Signs and Machines. Within Lazzarato’s picture of capitalist machinery, electric moments of spontaneity and intervention function as interruptions imbued with the power to expose the structural functionality of oppressive social mechanics. With this in mind, it’s all the more necessary to adopt a critical, distanced perspective of the subject’s positioning and surrounding mechanics. Only from this vantage point can Lazzarato’s political subject begin to tease out its seams and loose threads. Equipped with this knowledge, it becomes possible to act spontaneously.

Lazzarato prizes spontaneity for its capacity to disrupt systemic normativity and doxa, and dwells heavily on its conception through extra-linguistic semiotics. Since language is a principal network of support for the reproduction of capitalist systems, spontaneous action or revolutionary acts must be pursued and enacted outside of its bounds. Language must be considered as merely one semiotic system among several, recast onto a plane alongside presubjective, sensorial semiotics and their supra-subjective, mechanical complements. In other words, Lazzarato advocates for an interpretive perspective that investigates not just language and its effects, but equally its physical, affective, and social contexts. This comes to form most pointedly in his persistent championing of Mikhail Bakhtin’s politics of enunciation and Michel Foucault’s theory of Parrhesia, a form of spontaneous, singular, destabilizing interjection.

By insistently mapping his theory onto an existential plane, Lazzarato saves his book from falling into the fractal, micro-political abstraction. While his musings on sign-systems and extra-subjective machines resonate with a potentially opaque philosophical density, Lazzarato never strays too far from a quotidian base of operations. For instance, in the chapter “Conflict and Sign Systems,” an analysis of public space and semiotic governmentality is grounded within the context of recent French labor union protests and a discussion of precarious employment. Earlier on, mechanic enslavement is neatly explained through the relatable experiences of driving a car, calling for tech support, or using an automated checkout at the supermarket. In this way, Lazzarato’s work approaches the symbolic minutia of everyday life and labor, but always manages to draw itself back to existential reality and to the potential in all subjects to be spontaneous and revolutionary.

While his theoretical footwork is quite impressive, the most convincing moments in Signs and Machines arrive when Lazzarato turns towards political application. Most poignant of all is his treatment of hate speech in Nicolas Sarkozy’s 2005 presidential campaign in the chapter “‘Scum’ and the Critique of Performatives.” Lazzarato employs Sarkozy’s use of classist slurs to sketch a map of contingency between political and discursive realms by tracing the effects of his words on the subjectivities of Parisian suburban youth and immigrants (“Have you had enough of this scum? Well, I’m going to get rid of them for you!”(175)). In response to Sarkozy’s pejorative rallying, the targeted suburban youth co-opted the slur (racaille) into their own slang vernacular and subjectivities, imbuing it with a positive meaning as a mark of defiant pride, short-circuiting its initial political intent. By highlighting the socio-linguistic ripples of Sarkozy’s speech-act and their spontaneous reversal, Lazzarato demonstrates the intimate feedback between discursive acts and subjective economies as well as the radical potential of the marginalized through language.

Yet within Signs and Machines‘ generally clear, generative content, Lazzarato occasionally brings his own credibility into question by perhaps too eagerly calling attention to the shortcomings of his critical peers, most notably Jacques Rancière and Alain Badiou. On several occasions, parenthetical scolding takes precedence over clarification, and Lazzarato enters into a system of self-justification supported by the foibles of others rather than by the weight of his ideas alone. This practice is obviously quite common, but to be responsibly executed, a great deal of explicative footwork is required on the part of the critic. It doesn’t suffice to name-call, the reader needs to know why. Lazzarato’s dismissiveness is often accompanied by a brief argumentative gloss, but it never feels like enough to comfortably side with him. On one glaring occasion, he directly calls French philosopher Alain Finkielkraut an idiot. While the overall coherence of Signs and Machines remains intact, such jabs and name-calling sabotage Lazzarato’s own voice, exposing a perplexing, anxious tone. On the other hand, more delicate, long-form critiques (like that of Judith Butler’s theories of performativity) work with other texts rather than against them, generating new ideas in dialogue. Why Lazzarato doesn’t simply stick with this model remains a question throughout the text.

In general, Lazzarato’s prose is remarkably clear, and his translation of complicated theory is articulate and easy to follow. Sacrifices are seldom made to either philosophical pomp or clumsy materialism. Championing the radical potential of singular enunciation, interjection, and spontaneity, Lazzarato manages to deftly negotiate abstraction and existential concretion, situating Signs and Machines in a generous middle ground that grants its ideas a wide spectrum of potential application to everyday life or contemporary politics without getting pigeonholed in a historical moment. This versatility benefits the American reader immensely, bridging the tricky Atlantic gap that so often neutralizes the radical electricity of European political theory. The four years between Signs and Machines’ original publication and its English translation have been kind, and now more than ever (with an eye towards the Occupy movements, recent crises of surveillance, and the following precariousness of free speech) North American politics in particular benefit from a revitalized attention to the rippling potential of the singular voice. According to Lazzarato, however, this requires the subject to take a few steps back to observe the circulation of signs and symbols, discourses and inequalities that comprise the complex machinery of everyday life.

Patrick Lyons is a freelance writer and translator living in Brooklyn.