The Book of Emotions – João Almino 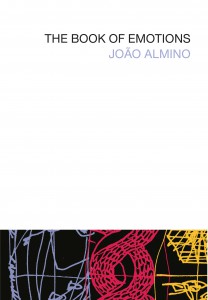 I don’t care much for politics, but given the nature of the race for the Republican nomination over the last couple of months, it has been difficult to keep away. Every morning I diligently listen to NPR and every afternoon I beam in The Rachel Maddow Show to get my daily dose of theatrics. But perhaps “theatrics” isn’t the right term; in the theater, you sit in your red plush seats and look up at the proscenium arch and see basically the same thing that everybody else sees. Such is the nature of linear perspective. But as has been made very clear, American politics does not have one, but two perspectives — I don’t dare say more — and one day, every good American must shunt off to their side. Similarly, The Media has its own set of perspectives and it shapes its images accordingly. What do they play on repeat, the candidate’s slip of the tongue or his rousing victory speech? Where do they stand when photographing a rally, in the crowd portraying excited supporters or at the back of the room, displaying the rows and rows of empty chairs?

The book opens with an act of near-defenestration. Cadu hangs out a window, photographing the tiny heads of people down below. The photograph he takes is mundane. If you were to look at it, you wouldn’t get overly excited. A typical crowd, figures heading into and out of the building, maybe a face lifted up towards his window. But it is this photo that is exemplary of all of Cadu’s work. He explains: “There are photographs that have only subjective value […] like that page of a diary that records what moved us deeply and whose dimensions only we understand.” It is only through knowing the story of how the photo came about, through standing, as it were, in the photographer’s shoes with an eye to the camera, or at least peering over his shoulder, that one gets just the right angle so that something glints, pushes out from the image. Suddenly, that upturned face is looking awfully familiar, and if there’s an emotion that it communicates, it’s not a good one.

Of course, you probably already know that there is only one emotion that leads photographers to list precariously out upper-story windows, and that emotion is jealousy. The single face in the crowd, we soon find out, belongs to one Eduardo Kaufman, politician,  demagogue, and, Cadu suspects, his lover’s new lover. But despite his seething hatred for the man, Cadu, who once took some famous photographs of a Brazilian president, allows himself to be enlisted by Kaufman in a photojournalism project to help aid a congressional campaign. After all, money is money.

But there are other kinds of images too, and it is in these that Almino explores the vicissitudes of character, the moments that change lives but somehow, from the outside, go undetected. Reality is also the turned away face of Cadu’s godson, a missed opportunity, a photo taken a moment too late, it is empty bench where he ecstatically fantasizes taking a date, but then never does, it is the rag-tag family whose starched smiles hide the specter of cancer.

Cadu portrays his life as a book of photographs. But unlike the grand political narratives that serve as a backdrop to his day-to-day actions, veneers of structure and stability that should crumble like a house of cards but somehow don’t, these are fragments that tentatively hold together, like molecules of water, threatening to fly apart; a series of photographs signifying nothing. Almino’s novel is a retrospective, a looking back, but memory is not narrative and “photography is neither a part of a film nor a moment in a sequence of facts. It’s a time for reflection, observation, and discovery.” The photograph becomes, in The Book of Emotions, a moment of order when things take shape. Cadu’s life is not a narrative arc, the muscle-straining climb up one face and slow descent down the other, but the coalescing of images when “the pieces of the chaos fit together perfectly, giving meaning to the universe.”

Behind the camera, Cadu plays all of the roles; the enterprising photojournalist, the lurid male gazer collecting female bodies, the lover of flowers and landscapes, the designated capturer of family moments. But in the end, Cadu’s eyes fail and his blindness forces him to come out from behind the camera. It is here, without barrier, that he can overcome the sense of sight in return for the sense of feeling; there he is, an old man, flipping through the pages of his photo album, his book of emotions, returning again and again to the details, to the moments that have passed but not been exhausted.