“Writing a novel takes so long”: Authors in TV 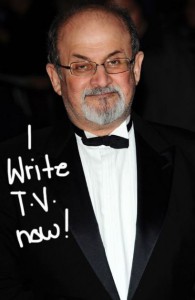 Alright, wait a second. It was kind of funny when Salman Rushdie decided he wanted to pen a sci-fi TV series (though seriously dude, who rags on The Wire?). But then Jonathan Franzen and Noah Baumbach announced they were teaming up on an HBO adaptation of The Corrections (J-Franz said in an interview: “I love the relationship with the page, but it’s luscious to see a good actor handle your lines.”)

And now, HBO has snatched up Karen Russell’s debut novel, Swamplandia, about a girl in a family of alligator wrestlers.

Readers, this should concern us. HBO is stealing our novelists!

Granted, it’s not like authors haven’t been working in TV and movies for years. And we can’t really blame our creative geniuses for wanting another source of revenue (though I’m sure J-Franz and Rushdie, at least, are quite comfy). And sure, there are some totally great TV shows out there that elevate the genre to high brow so that we can all confidently discuss them over the water cooler (see: Mad Men).

But for an ominous sign, let’s turn to Jonathan Ames, writer of HBO’s Bored to Death, which was based on one of his short stories. The subtitle to a recent article about him? “The ‘Bored to Death’ writer doesn’t have time to write another novel thanks to the demands of the HBO series.” (He elaborates within: “It’s hard for me to think of writing a novel because it takes so long.”)

Let me remind you: this is the man who had to ask strangers via Twitter if he could watch the first BTD episode at one of their houses because he didn’t own a TV.

Therein lies the strange tension between our quirky, beloved, television-less authors and Mass Entertainment. I’m reminded of a certain Charlie Rose interview in which Jonathan Franzen (circa 1996—aww, that hair!) discusses the subject of TV with David Foster Wallace. Wallace clearly champions books (he calls them “an exchange between consciousnesses—a way to talk about stuff that we don’t normally talk about”), and Franzen seems to agree. He conjectures that people who read a lot of books often don’t participate in mass entertainment, because they don’t “fit in” the world at large.

Which makes me wonder, especially when Franzen steps out with Noah Baumbach, have the tables turned? Have the nerdy, quiet reader-types morphed into the cool kids, and are they now trying to take part in (or take over) a medium they once felt symbolically rejected by?

Whatever the reasons behind it, I remain disturbed. TV is generally defined as not-the-healthiest-pursuit. Especially when e-readers are gaining such steam, it seems a shame that some of our biggest literary champions are turning away and pushing folk to add another hour to their 4-hour/day TV average.

And really, how could a TV adaptation of The Corrections possibly compare to the book, anyway?

(Note: Shout out to Phil Edwards for originally cluing me in to this trend.)