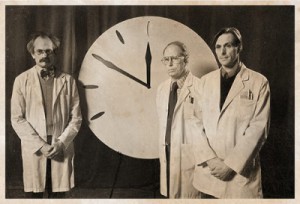 However, in the wake of the horrific announcement made last Friday regarding the release of Adam Sandler’s latest film Jack and Jill, we feel that such a silence can not longer be maintained in good conscience. Mr. Sandler, our hand has been forced and the Full Stop Doomsday Clock set, for the first time, at 11:53PM. In the days to follow the hands of the Clock will move either closer to or further away from zero hour (ultimatums include: 1) a Joel Shumacher directed version of Neil Gaiman’s The Sandman, and 2)  Son of the Mask‘s preservation by the National Film Registry) at which point we’ll all just call it a day and go get degrees in hotel management. If you haven’t seen the trailer yet, here it is:

In the face of a similar calamity, William Faulkner said this:

Our tragedy today is a general and universal physical fear so long sustained by now that we can even bear it. There are no longer problems of the spirit. There is only the question: When will I be blown up? Because of this, the young man or woman writing today has forgotten the problems of the human heart in conflict with itself which alone can make good writing because only that is worth writing about, worth the agony and the sweat.

Notably, that portion in bold  suggests introspection, nuance, and does not read: Adam Sandler in conflict with himself. Faulkner then went on to add that “man will not merely endure: he will prevail,” but judging by that scene where Lady Adam Sandler pilots the Sea-Doo to the bottom of a pool before being hurled 15 feet in the air, or the one where she oafishly insists on riding a small pony and breaks its back because she is fat, the prognosis is grim.