Jonathan Safran Foer: A Day in the Life

by Alex Shephard and Max Rivlin-Nadler 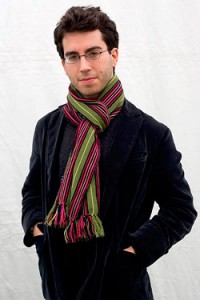 But today was different. Today he would finally achieve his goal. Today he would put the finishing touches on the project he had been working on in his finished basement for the past 18 months: “Grantiful,” a robot that felt real human sadness and also submitted winning applications for grants.

“We are like aardvarks, sniffing up the anthills of our pasts,” thought Jonathan Safran Foer. “The tears are all the moments we spend alone, writing out letters to our dead loved ones, half-asleep.” But where was his butler?

“Samuels!” cried Jonathan Safran Foer. “Where is my French lentils and root vegetables baked in a phyllo crust served over a carrot cashew cream sauce with rainbow swiss chard and caramelized onions!?” Jonathan Safran Foer ate this every morning, and he was growing hysterical, and felt he was being crushed under all the morally acceptable meals he was not eating.

Jonathan Safran Foer does not look back on more radical, younger days with a bit of fancy — no, since he was but a child he always wanted to be a nebbish Brooklyn author, who could grace the NY Times Op-ed section on a whim. In fact, that is just what he does. After breakfast, he dictated three paragraphs to Samuels wondering what the inside of a public school looks like. He assumed, anarchy.

After finishing breakfast and successfully dictating, Jonathan Safran Foer decided to take a walk. He would enjoy one last day of being a multmillionaire. For after “Grantiful” began filling out grant applications, he would become a megamillionaire. “I will buy new cufflinks tomorrow. Cufflinks shaped like pterodactyls with emeralds for eyes!” He giggled.

It was a beautiful day. “It is like everything is breathing, no, maybe wheezing under the sad burden of history, which weighed as much as 1,501 elephants and hippopotami or 347 Titanics or 114 Empire State Buildingses.” But he was feeling very lonely.

“Nicole!” He cried. “Nicole!”   A voice omnisciently declared, “I am here Jonathan, I am here. I am you.” Jonathan Safran Foer began to feel better.

Just as he was about to walk into his brownstone, Jonathan Safran Foer happened upon an old woman sitting on a park bench. The woman had a lapdog. “I bet that lapdog’s name is Georgio,” thought Jonathan Safran Foer. “Her owner is surely a Jewish grandmother. I will please her.”

“Hello Jonathan Safran Foer,” said the old woman. “It is nice to meet you. We read your book Eating Animals is Illuminated in my book club. It was very morally acceptable.”

But the woman did not say that. “Okay,” she said, as her eyes scuttled around, averting Jonathan Safran Foer’s gaze (the gaze of the moon on the earth, the gaze of 10,000 suns, the gaze of love). “I have to go now.” She stood up and walked away.

Jonathan Safran Foer was furious. “I am a ship on an ocean of tears,” he thought. But he did not like feeling furious, so he imagined it was his 60th birthday and he was in Ebbets Fields (he remembers!), surrounded by adoring friends. Liev Schriber was there. So was Oprah. Liev Shriber was giving a speech about Jonathan Safran Foer for his birthday. “Jonathan Safran Foer is a genius of sadness. His writing makes my heart crumble into a substance reminiscent of pancake mix.” Tears rolled in and out of the crevisces on Liev Shriber’s face, much the way that a child’s slinky rolls down a staircase. “Memory is like a slinky,” Jonathan Safran Foer thought. He was getting distracted, which meant he was feeling better, which meant it was time to put the finishing touches on “Grantiful.”

Jonathan Safran Foer returned to his finished basement, past the cupboard in which he secreted his miniature version of the world (very small, very sad), and  looked upon “Grantiful.” All that was left to do was to animate it with a particularly large tear but Jonathan Safran Foer was not ready to stop working on his pet project. What if his eyes were telescopes and you could look into them and see “Grantiful’s” heart (which was also Jonathan Safran Foer’s heart) beating pip pip pip? What if when he farted it sounded like “La Cucaracha?” What if his lips were the lips of a rubber ducky and you could remove them and play with them in the bath so you were never alone? What if he had a Groucho Marx moustache? That would be very funny. “Ha ha” laughed Jonathan Safran Foer. “Ha ha” laughed Grantiful in return. Jonathan Safran Foer was amazed. All it took for the machine to work was a profound sense of self-satisfaction. They beamed at one another. They smiled like post-coital lovers on the outskirts of the Shtetl.