The Gospel of Anarchy – Justin Taylor 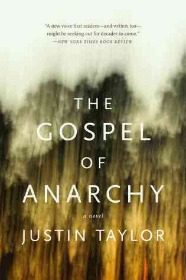 Beginning with that transgression (jerking off/tub-throwing of computer), David destroys the various ways late-capitalist conformism distinguishes “sanity” from “normalcy” in late-1990s Florida. This path, and The Gospel of Anarchy in general, disturbed me. In a great way.

The Gospel of Anarchy will remind you of the line you toe so you can keep your place in this society. The one under which you sweep your deviant thoughts so your conspecifics won’t see them and think you’re “weird.”

But you are, in fact, weird. There’s a place in your mind where various madnesses, violences, aberrations, deviations, irregularities, glitches, and fantasies are born and thrive. You’re constantly confronted with them. That’s where the line is, like the one between dreaming and wakefulness. The line holds the deviations back from reality. There’s a platoon of psychic soldiers fighting at this line, a crucial front in the war between propriety and the inappropriate. The battle is ongoing: you fear (pray for?) the day the inappropriate side wins–the day you jerk off on your computer and throw it in the tub.

Taylor’s characters approve of this perverse pleasure. Along with them you secretly treasure the thought–fantasize–about the day when the obligations in whose web you’re stuck, the metal wheel of this rat race life, crash and burn. You dream of revolution, redemption, breaking free. You dream of violent release. (Think Fight Club.)

At first glance these obligations seem like “systems of control” acting upon you in concert. But they’re more than that. The
obligations are mutually supporting bonds. Your education grounds these bonds, your beliefs and desires bolster them, and your
relationships with others maintain and re-inscribe them. The bonds are internal (psyche) and external (culture). You freely enslave yourself and others within them. You use these bonds (they use you?) to draw the line for yourself between appropriate (normal) and inappropriate (insane). You define your words with them. You use them to guide your actions.

The obligations thereby create solidity in flux, ground in the ocean, a station in space. They create creation in chaos, as the “Fragments From The Gospel of Anarchy,” the half-fabricated spiritual-philosophical chapbook-in-the-novel would say (note the book-in-a-book trope here that Taylor inexorably follows, as though he’s obligated to do so by postmodernity). They compose religion itself. Acts done in an obligation’s name are therefore holy works: normal: fit and right. Good citizen. Good boy. Good student. Good son. Good democrat. Good teacher.

These obligations are the glass sides of the ant farm. The walls within which power, drama, glory, failure, and redemption take shape. Because of them you know who you are, where you are, when you are. You know what to do next, who to talk to, and what to say. Apply to grad school. Get a job. Make a joke. Pay taxes. Wear pants. Stare at the screen. Listen to headphones. Keep a good credit rating. Make the purchase. Look for an apartment. Study abroad. Study for the test. Put commas after clauses, and periods at the ends of sentences. See the movie. Eat the food. Ask: “How are you?” Reply: “Fine.” Ask: “Do you have the time?” Reply: “Thanks.”

But then you realize: these obligations are fabricated! Human-made! They’re not actually there! You can change them! At first this excites you. This is the “freedom” that mainstream, indy, and subaltern literature, music, and film has promised you since you started hating your parents (is this actually freedom? We’ll get to that…). But then nausea sets in, as Sartre would say. What do you do now that you’ve broken the chains that bind?

One reaction is nihilistic: give up, nothing matters in a virtue-less universe. This is a complete protest against assertion of anything that might resemble an obligation (though an obligation itself).

Another reaction is artistic: play at the line between normalcy and insanity in a constant state of irony, showing from within the system that the system is a fabricated system. The artist thereby robs ideology of its reality in an attempt to become free of it while still ensnared by it, as Barthelme says in “Kierkegaard Unfair to Schlegel.” This is neither assertion nor non-assertion of ideology; it’s more like being an ideology-juggling clown at a circus.

Another reaction is spiritual-political: overcoming, as in Nietzsche’s Zarathustra. This means creating and carrying-out one’s own obligations to one’s self on one’s own terms, some approximation of the Ubermensch. This is where I would categorize The Gospel of Anarchy.

Since Taylor is such a Barthelme fan it feels right to cite him again. At the end of Barthelme’s story, “The School,” the children cry out, after so much death, “we demand an assertion of value!” Taylor, rather than succumbing to nihilism or the clowning of full-out artisanship, appeals to this last spiritual-political reaction to obligation. (Though Taylor himself is a novelist, which means he’s still a clown. So maybe he’s an Uberclown. Or something.)

Now we have a backdrop to discuss the story itself. The punks that David moves in with after he quits his job (Katy, Liz, Thomas, et al) find themselves at different stages and proximities to this Ubermensch reaction to obligation. Instead of Zarathustra’s cave, their hovel is a punk safehouse in Gainesville, Florida called “Fishgut,” a remarkably well-named hideout in light of early Christianity’s symbol-of-choice. The descent into overcoming is remarkably depicted from various characters’ angles. I felt it deeply: the orgies, death metal, and anarchic ceremonies praising the prophet Parker who, notably, is nowhere to be found. Parker is “free” because he’s free of obligation and Taylor’s characters worship him for it.

The only negative thing I’d say about the story itself is its stylistic transition from cute coming-of-age punk novel (think Joe
Meno’s “Hairstyles of the Damned”) to profound philosophical fire-journey. This jostled me to the point of distraction. It was like
watching “Clueless” for ten minutes and realizing it was actually “Donnie Darko.”

But a bumpy ride is to be expected: David, our main character, overcomes. He crosses the line. He ends the war between insanity and normalcy. He dissolves the platoon. He unplugs, and then some. This is why I found the novel so deeply disturbing: even as I write this review I find myself still in the artist’s role, a clown at the war-front juggling obligations.

The truth is that I’ve always (secretly, terribly) wanted to cross the line like Taylor’s David and his prophet Parker. This book brought all my terrifying fantasies of fire and flux and freedom to the surface. Reading it brought me back to that old battlefield where my little platoon fights to maintain my obligations to the rat-race world.

Like many great works of American Literature Taylor’s novel threatened my small platoon of obligation protectors. It reminded me that I don’t–shouldn’t–trust these soldiers, that I should question their objectives hourly, that I should dismantle their weaponry and prevent them from holding their position against freedom and insanity.

It brought me back to the question: What would happen if I were to make myself free of obligation? What if I jerk off on my computer and walk out of my life like Jerry McGuire or, better yet, Guillermo Diaz in Half-Baked (“fuck you fuck you fuck you–you’re cool–I’M OUT!”) What if I quit my job, broke all my contracts? I would overcome! Achieve authenticity! Get in tune with God’s favored state! I’d be FREE!

But wait. After talking to my girlfriend about this whole cycle–this truly American form of redemptive Freedom–I wondered: is this freedom really redemptive, or is it tragic? Gazing into my girlfriend’s eyes, looking around the city streets, I knew there was something missing from this story. Love. Yes, I love my girlfriend very much. Her love makes me free, too. Is that the same as anarchic freedom?  Thinking of the novel now: where are love and its freedom in this gospel of anarchy? Where are other people?

In the book other people are just rungs in a ladder that their friends climb to achieve some kind of nirvana. Fishgut is a center of mutual use.

Yes. This is tragedy. Because this “anarchy” we’re presented with is actually a capitalist’s bootstraps mentality. Only instead of material wealth we’re after spiritual wealth. I must use others to achieve what’s best for myself. I’m only obligated to others to the extent that they can help me get what I’m looking for. If we all do this together then we’ll have our utopia. This is Fishgut’s ethos.

But this ethos is just Adam Smith’s “Wealth of Nations.” It’s the ethos of the free market.

This is my real critique of the book, and it takes the form of an hypothesis: Freedom and independence are different.

Independence means breaking obligation and tradition. A striking out on one’s own. Rabid individualism. But this isn’t freedom. Freedom only occurs in the context of obligations, other people, and social bonds. In other words, a bond isn’t necessarily a chain: it can be composed of our obligations to one another.

If I want to be free, I can’t just run away like Parker. I can’t jerk off on my computer, dump it in the tub, and never talk to my family
again (eg, a question I had about the movie The Social Network: where are their parents?) I can’t reject my country or my polity or my economy. This is independence, sure. And it’s in our American lifeblood to believe that independence will get us freedom. It’s in our Declaration of Independence. But while it may be our country’s trope, my hypothesis is that it’s pubescent, unreasonable, and counter-productive to get up and go and pray for redemption thereby. Otherwise, we end up back where we started.

I can’t know this for sure. It’s just an idea I’m playing around with, that independence is tragedy and not freedom.

In this light, Taylor’s book poses as a rejection of capitalism but ends up building another monument to it. This is an unfortunate
circumstance of any “critique” of capitalism. It happens to anything that tries to undermine the system. We see it all around us now. Che Guevara t-shirts, Beatles billboards, carbon markets, “green” plastic packaging, huge industrial “organic” farms, and “sustainable” development projects around the world that merely accomplish the same old colonial goals.

The real rejection of capitalism is to stop trying to amass any wealth–spiritual or material. I’m not sure what this means yet, but
I’m hoping to figure it out.

Read Justin Taylor’s book–relish it–but beware. It’s anti-capitalist narrative might be capitalist, and the freedom it depicts might not be free.