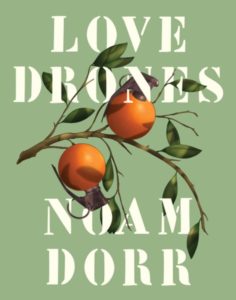 These essays look strange on the page, yes. Their luxuriant white space wastes paper. “Wouldn’t It” is over thirty pages long, but I can read it in five minutes — or spend the rest of my life thinking about it. Their rampant non sequiturs violate everything I learned about beauty, economy, and the known/new contract. But to adequately describe what makes such choices so essential in Noam Dorr’s debut collection of lyric essays, Love Drones, I would turn to a famous quote by Samuel Beckett, describing James Joyce’s writing: “Here form is content, content is form . . . His writing is not about something; it is that something itself.”

Dorr is a writer obsessed with certain shapes and movements, particularly fragmentation, diffusion, inside/outside demarcations, and outward movement from a central point, and his essays often take on these movements and use etymological research and associational logic to offer starting connections. The title essay, for example, binds its fragmented movement into large blocks of text, simulating a drone of words, as the foregrounded machines of war are put into conversation with a host of seemingly disparate personal and extrapersonal events and topics — drone music, bees and their potential extinction, and the sound of a medical nebulizer that calmed the speaker’s asthma as a child — to meditate on ecological disaster, technological determinism, the speaker’s time as an Israeli soldier and collector of intelligence, and the legacy of his grandfather’s role in manufacturing weapons for the Israeli underground. In Indian music, the drone represents the divine, the eternal, over which the mortal instruments improvise, and cutting through the drone of Dorr’s text, a set of words and images continually transform: “We are star struck on the edge” — “We stroke the star’s edge” — “Stricken by stars or awe struck, or are we awaiting a strike, the blow to cut through the droning, on the edge” — “Weeping for the striking of stars”—“The edge is only the furthest the fragments have reached, as far as stars can strike, so wipe the stars from our eyes, from the edge of sight.” Lines that sound lovely until their dire implications begin to dawn. In an essay about the remote piloting of drones, the stars are also bombs dropped on faraway lands, their edges the difference between life and death, between a mission’s success and civilian casualties that must be covered up. The stars are also what tears do to eyes. One’s comfort or terror at the sound of the drones is entirely dependent upon arbitrary boundaries. Like Tyrone Slothrop in the opening chapter of Gravity’s Rainbow, “Love Drones” is an essay about trying to imagine oneself into the moment of being blown up and trying to erase the mediated distance that drones afford the bombers from the bombed.

Language is not innocent, is implicated. “In the act of translation there is so much text on the screen that I can no longer find the context,” Dorr writes, comparing the analysis of military data with literary deliberation, “I am told the intelligence work saves lives, but I no longer know.” Nor is photography, as the text leaves unstated the direct comparisons between photographic and militaristic shooting. The same technology that can bring justice and salvage moments of ephemeral beauty from the passage of time is what grants pilots in Las Vegas the ability to hit targets in Afghanistan, grants higher-ups the grounds for justifying the slaughter of civilians. “They say the images taken from the drone clearly reveal the operative taking a rocket launcher out of the back of an ambulance,” Dorr writes in “Light/Text,” an essay on photography that itself is fragmented over the course of the whole book. “Still, I think it looks like a pole, or a rolled-up stretcher.” A powerful image of his father’s darkroom offers a poignant reduction of the contrary capacities of this and other artistic media: “Then dark resolves into low red, and water flows off the bodies hanging from the wires.” The text of this scattered essay is superimposed over black-and-white photographs in the process of coming into focus, granting readers another photographic corollary for the gradual dawning of awareness that time and learning can provoke when truths are obfuscated by hegemonic forces and the ideology of one’s upbringing.

“A Study in Three Oranges” takes its fragmented form, on the other hand, from the natural world, its lexia imitating the segmentation of the eponymous fruit to explore Dorr’s memories of working in a juice factory as a teenager, the importance of oranges and pomegranates to the State of Israel, and a historical incident in which two members of the Israeli underground — condemned to die by the occupying British military — blew themselves up with grenades made from hollowed-out oranges filled with shrapnel. The essay connects a startlingly literal use of fruit as a weapon, to the etymological similarity between pomegranate and grenade, to the way that human ingenuity and the natural resources of an area are marshalled for violent ends. While oranges lend their segmented shape to the essay, orange juice provides an image for inseparability, the commingling that interconnects humans with one another and the present with the many versions of the past. In a number of “segments,” Dorr braids together the stories of “The Engineer” (the figure who made the orange grenades) with “The Inventor” (who developed an device to detect orange trees’ need for water in Israeli orchards) and “The Watchmaker” (who built an orange tree automaton) to meditate on a range of different uses toward which inventiveness can be bent. Oranges are directly compared to humans through the image of scattering, a word used to describe both illegal immigrants’ attempts to avoid detection in Israel when it was under British rule as well as the exporting of Israeli oranges around the world. Given this fruit/human metaphor, the tracing of the orange’s origin in Southeast Asia and its many symbolic uses across various times and cultures disrupt notions of purity, nationalism, and centrality, showing a world in which its people and resources and associational meanings are utterly interwoven.

The essay “Wouldn’t It” moves back to an inorganic catalyst for its literary fragmentation, the diagrams of rifle parts strewn about the pages offering a comparison between the essay’s modular lexia and a gun’s component parts. The memoirist’s task of assembling a coherent narrative from snatches of memory is thus paralleled with the assembly of a firearm, which is an apt metaphor to depict an upbringing permeated with weaponry and military service; Dorr’s essay, on the other hand, remains in pieces, an essay that can do no greater harm than a weapon that’s been disassembled. Hypothetical worlds built upon a variety of metaphors connect the essay and offer new ways to look at notions of entwinement versus the divisiveness of race and nation. These metaphors fall somewhere on a continuum: wholeness / indistinguishability versus detachability and the fragility of component parts. “It would be lovely and terrible to live in a world made of stone,” one lexia reads. “A single break would take millions of years of convection to undo. Perhaps then we would be more cautious with our actions.” On the other end of the continuum, “It would be lovely and terrible to live in a world made of Lego. We would all fit together consistently. Every foot would have a perfect round anchor, and our faces would carry a permanent sickle smile.” The result of these accreted fantasies show us a young mind trying to make sense of culturally-imposed difference.

The codex of the essay “Passport” resembles the stamped pages of this identifying document — in this case one of Israel — and so each lexia functions as a type of entry and exit stamp for ruminations about his home country and his eventual decision to leave. The passport becomes, for Dorr, a perfect example of human attempts to define and stabilize an essential totality where none naturally exists. “The enforcement of passports,” he writes, “is rooted in an exclusion — a declaration of an inside and an outside — outside the present moment.” The text reads across the central gutter to instigate a constant border crossing that violates the arbitrariness of human boundaries. In “Fragment | Fragment,” the words of the speaker and his friend’s morbid take on a children’s game continually interrupt the text, the numbers 1 to 467 written out as gray words, a black “BOOM” taking the place of every number divisible by 18. The continual intrusion of “EIGHTEEN BOOM” into the text conditions readers to stop actually reading the words, and — in an essay describing the speaker’s proximity to the Sbarro restaurant suicide bombing of 2001 — this omission mimics our desensitization to violence and to young peoples’ attempts to cope with its pervasiveness. This essay most explicitly addresses the collection’s critical stance toward the power of metanarratives as marshalled by hegemonic forces — “Perhaps the idea of anything whole is faulty to begin with” — as well as the capacities of stories that come from the bottom up, stories written from a place of love, to act as anti-bombs: “The rules change when we introduce stories . . . Devices that have the power to extract fragments from a landscape and contain them together.” It is through these hale breakings and subversive bindings that Love Drones makes us reconsider what we take for granted and reveals new networks of communication — geopolitical, emotional, and aesthetic.

Joe Sacksteder is the Director of Creative Writing at Interlochen Center for the Arts and is the author of the story collection Make/Shift (Sarabande Books) and the novel Driftless Quintet (Schaffner Press). Recent publications include Salt Hill, Ninth Letter, Denver Quarterly, and Bateau.