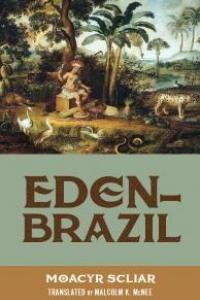 In May, the Amazon rainforest disappeared at a record-high rate of nearly two soccer fields per minute. Protections for this all-important region – one often labeled “the lungs of the Earth” – had been swiftly reduced by the far-right government of Jair Bolsonaro, who took office at the beginning of this year. As he diminished the power of the environmental ministry and indicated a willingness to open up more land for mining and farming, Bolsonaro increased the likelihood of Brazil becoming, in the memorable words of activist and former senator Marina Silva, “an exterminator of the future.” In the face of such growing deforestation, preservation is of course a priority for those concerned about the climate crisis, but the best means of going about it in this precarious political context remains an open question.

Moacyr Scliar’s Eden-Brazil, translated by Malcolm K. McNee, reaches English readers at this moment of deficient responses to a dire threat. First published in 2002, the slim novel tracing ill-conceived attempts to preserve a remarkable landscape was written at a time when CO2 levels were lower than 400 parts per million (a number they have now exceeded) but still above the recommended 350. Yet as he deftly narrates the loss of a supposed paradise shortly after its discovery, Scliar does not explore the gradual corruption of an ideal as much as he dissects an idea that was corrupt from the very beginning: conservation and its concomitant differentiation between nature and culture.

Eden-Brazil follows the various follies of an agronomist who had been involved in environmental activism as a student but then left it behind to start a family. But conflicts stemming from Adamastor’s paltry earnings as a government bureaucrat drive him and his wife apart, and their divorce leaves him with few commitments when he suddenly comes into an unexpected inheritance from a wealthy uncle. (Scliar tacitly acknowledges the absurdity of such a narrative strategy precisely by devoting just a single sentence to this event that is essential to the unfolding of the rest of the novel.) Free to pursue whatever fascinates him, he purchases a stunning piece of land in Santa Catarina, a coastal state in southern Brazil that does not contain any of the Amazon but whose richly biodiverse Mata Atlântica, or Atlantic Forest, has experienced similar threats of extreme deforestation. The natural question – and for Adamastor it is a nature question – becomes how to share this splendor with others, and he decides to create something resembling a theme park that will serve as “a refuge, even if temporary, from a stressful, meaningless life.”

Even as he understands his preserve to offer an escape from human activity, Adamastor relies on some of the very worst of it to make such a space appealing. He engages the help of an Argentine businessman who is less shrewd than shady and who suggests that a sexualized spectacle will draw tourists to this space of striking difference precisely by offering them something familiar. As a result, what Scliar effectively captures in this compelling send-up of a deeply misguided environmental savior complex is just how damaging the artificial separation between nature and culture can become. (The very idea of the natural as somehow distinct is, after all, thoroughly cultural.) These two strands are in fact so intertwined as to be indistinguishable, and rather than consider how we can move from one to the other our environmental understanding should instead be alert to the ways that human and non-human are always and already interacting.

By the time Eden-Brazil opens for business, the ecotourism park features an animatronic snake accompanying a half-hour re-enactment of the story of Adam and Eve guaranteed to draw media attention because of the actors’ nudity. (Such a step is also deemed necessary since Adamastor’s property, while well-preserved, lacks exciting species that would capture the interest of the tourists who will make his venture profitable.) What holds true of the story of the Garden of Eden applies to the park as well: it is destroyed by temptation, which here means yielding to the desire to become more tempting to others. And as the novel tracks the steady, spectacular failure of such sheer spectacle, Scliar simultaneously stresses how the characteristic isolation of conservation proves not only impossible to achieve but also quite possibly ineffective in its aims.

Adamastor’s name, which comes from a sixteenth-century epic by Luís de Camões, refers to a spirit located at the Cape of Good Hope that supposedly gave Portuguese sailors difficulties during their attempts at colonial expansion. But, as George Monteiro has noted, in the centuries since it has acquired many meanings, including the threat of Africa to Europe, the threat of Europe to Africa, and, even more broadly, the idea of African exploitation by others. It is, in other words, an apt name for a character who threatens this region with tourism even as he thinks it is threatened by other forces. In this way, Scliar signals how it is the means, instead of the ends, that we must scrutinize.

Before dying in 2011, Scliar, who had trained as a physician and even became the head of Rio Grande do Sul’s department of public health, wrote more than seventy works, including novels, short story collections, and young adult literature. As McNee observes in his translator’s note, Eden-Brazil was often considered to belong to this last category, perhaps because of its frequently breezy tone and occasional heavy-handedness. Yet the didacticism that sometimes emerges in the novel is a welcome reminder for all readers about the urgent stakes of climate change and a necessary rejoinder to those who might unquestioningly accept the case for simple conservation. And despite the ostensible simplicity of the novel’s first part, there is at the end a turn that serves as a sort of coda and that raises an entirely different set of issues.

After the initial iteration fails due to dismal turnout and a series of staff departures, Richie – an actor in the production – comes up with another idea to rescue this project intended to save part of the forest. Having spotted a newspaper article about a Swedish foundation willing to contribute funds to protect indigenous Brazilians, he hatches a plan that requires him to change roles, moving from a Biblical first human to an indigenous last man. Rather than perform as Adam, Richie will now pose as the sole remaining member of a disappearing tribe. Adamastor, hesitant at first, later agrees to this deception designed to stave off financial ruin and guarantee the continuation of the preserve, but once again it is the absolute wrong way to go about doing what might seem right. The poorly planned scheme, which includes cell phone communication and code names drawn from a nineteenth century novel, is soon uncovered by a Brazilian working with the Swedish foundation. Yet rather than turning them into the police, she generously allows Adamastor and Richie to concoct another storyline that will make their made-up indigenous man disappear. They quickly do, effectively ending the dream that had motivated Adamastor in the first place.

Although such Scandinavian involvement in Brazil might seem unusual, it is hardly unexpected, even if it tends to focus on international efforts to address climate change rather than on indigeneity. Between 2008 and 2017, Norway, newly rich from oil and natural gas production, contributed nearly $1.1 billion to the Amazon Fund, which is run by a state development bank in Brazil and intended to reduce deforestation. (Germany has also donated significant amounts.) Yet Norway later cut its annual donation in half, citing concerns about increasing forest loss, and the fund has stopped giving out awards since Bolsonaro took office. These intercontinental links suggest that we understand the climate crisis through this lens of intricate implication, and they also exemplify the need to think past a model of conservation that not only risks isolation but also fails to account for such imbrication.

Examining these intersecting, interdependent scales of local and global requires an approach far more subtle than both the idea of spectacle that Eden-Brazil so roundly critiques and the frequently overt pedagogical moves that make the novel’s classification as young adult literature almost inevitable. But this mismatch forms part of what is perhaps Scliar’s most important point: in these new climate circumstances, old stories will not suffice when it comes to stirring us to action. Rather than simply retell Genesis, he argues, we must begin crafting alternative narratives that do not risk exterminating the future and instead help us protect it.