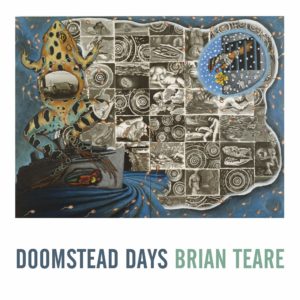 Wearing down barriers, blurring edges, encompassing and penetrating all it touches, water is the central force — the immanent transcendent — of Brian Teare’s new collection, Doomstead Days. “Today’s gender is rain,” begins the title poem: “it touches everything // with its little silver // epistemology // mottled like a brook trout // with a hundred spots.” Water binds and smudges the world in Teare’s poetry; it’s absorptive and disruptive both. Its ceaseless motion and variety suggest life to us, and, in its movement between outside and in, it situates our mortal flesh in nature:

streams even in the mud
under my feet, I want
to say I feel the pull

on all my vertebrae,
occiput to sacrum,
the water in my bones

longing to join the thaw.

Teare’s a poet of desire, and he can feel it in a rill of spring runoff as much as in the crush of sexual contact. He has situated his poetry in the ecopoetic tradition, one that offers (as he wrote in his essay “The Good Life: a Valediction of Ecopoetry”) a felt and intimate relationship to place, to nonhuman others, to a world of facts and things. Such relationships are the kinds of nonquantifiable knowledge corporations and governments refuse to value, the kinds of nonmonetizable knowledge their actions actively disavow.

The place-rooted, “felt and intimate” poetics Teare defines here calls back to, among others, Tamiko Beyer, a poet whose work he admires in “The Good Life.” Beyer has written of a “queer::eco::poetics” that “work[s] to disrupt the distinctions between outside and in, natural and unnatural, normal and freakish. A poetics of the porous.” This poetics imagines a variety and openness to change that Beyer finds in gender itself, calling gender “many, variable, shifting, negotiable, disruptive, presented, claimed, owned and operated,” reshaped by queer potentialities as earth is reshaped by water. Queerness and water are both pervasive and appetitive, “soft and smooth” but capable of “wear[ing] away vast canyons.” “Gender,” Teare writes in Doomstead Days, “once meant to fuck / beget or give birth / sibling to generate / & engender all / fertile at the root / & continuous / as falling water.” Gender, then, is an embodied mode of orienting oneself in the world. Gender is life-giving without necessarily being procreative, and it’s “continuous” once freed of heteronormative binaries. It encounters its edges when it mingles with its surroundings and it has a hunger at its root. We feel this tug of hunger even in subtle and quiet moments, and see it reflected back to us in nature. Teare, in “Sitting River Meditation (Johnson, VT),” compares the “soft force” of desire to the gentle pulse of water right at a winter riverbank, stirring where it still hasn’t frozen.

So if this gendered element of water, powerful and subtle, so pervades and remakes the world of Doomstead, what can resist it? What friction in worldview, what grief and paradox, could animate poems which are so enraptured of their central force? The answer in Teare’s poetry is economic, bodily, and scientific. Our deepwater oil spills, our medical byproducts, our creeping drones, all the fruits of our ingenuity and cruelty, are what rip nature apart and rip us apart from nature. They are what taint our sources, inner and outer. Water, this flowing force, also strips topsoil, carries poisons, pools in the “little prison[s]” of our cells. We humans block up and befoul that which could renew, remake, and heal us.

If the flow of water is vitality in Doomstead, then arrest is death. A doomsday shelter to which Teare is invited (“seems kinky / for a first date”) is called a “blocked thought.” The dams choking the Schuylkill River of Teare’s Philadelphia home give rise in the title poem to typhus, coal silt, industrial runoff, and burning pollutants. The “shut skull” and stuck occiput of Teare’s migraine torture him until a healer’s hands open and release his vertebrae back “into / the natural curve / the bones forget.” Again and again in the book, healing movement is contrasted with sickening stagnation.

In “The Good Life,” Teare wrote that

Doomstead bears this witness, puts plenty of sweaty flesh and real crumbly dirt into it, moving back and forth easily between ravaged outer nature and damaged inner body. Pissing by a river, Teare becomes an “anthro- / pogenic nonpoint source // pollutant, my urine / a potent effluent / of medicines I need // & pesticides I don’t, / a pharmacopeia / of harm for riverine / species.” Teare knows his body is one full of

a bloom of fungus,
my blood an arsenic sleeve,
a lead reservoir,

a wet rose loaded
with mercury

In Teare’s ecology, our human insides are as rundown, befouled, and complicated as nature’s outsides. The enduring difference, though, in Teare’s poetry between the human subject and the natural environment is the compulsive activity of our responding human mind. In “Clear Water Renga,” on the 2007 Cosco Busan oilspill, Teare meditates on the image of a seabird in the spill’s aftermath. The natural world, “the real,” can simply absorb new facts — an abstraction Teare makes hideously tangible in the feather-coating oil inevitably poisoning the bird’s guts as, with its beak, it preens its soaked wings. The mind, by contrast, cannot simply absorb: it must react. The natural world can make use, as the goldfinch does, “husking invasive / thistle seed for feed.” And, when an ecosystem collapses, it dies without self-pity. A different poet’s sensibility might have drawn some dreary lesson in spiritual tranquility from this “endless hollowness // my mind can never mimic,” but Teare can’t: he knows that antsy active human consciousness is irreducible and human ingenuity is just too deadly to ignore.

Teare’s poetry has opened out as it’s gone along. From the fragmentary and epistemological lyrics of his early books Pleasure and Sight Map and the tight formal structures of 2013’s Companion Grasses, Teare in Doomstead Days has relaxed into a form not far removed from the old-fashioned Romantic lyric: narratives of the poet sitting, walking, and meditating beside streams or on city streets. Teare “vanish[es] outward” into experience —

I spend hours
so empty my mind’s

the ranch barn open both ends
to wind, nothing but old hay

stirring in the stalls

— but “even then,” he continues, “I still dwell in / the real”: a world of invasive species, joblessness, and the “fraught occupation” of capitalist development. Coleridge and Blake despised industrial modernity, but Teare is honest enough to feel its effects inside himself as well as around him.

Teare’s feel for line and stanza is exquisite. The most somatically pleasurable poems in Doomstead — the ones I’ve reread most — move across the field of the page in a way that literalizes the poet’s shifting attention, as tangible as the sweat-wrinkled notebook he reminds us he’s writing in. Teare has always been a musical writer; the sensitivity to sound throughout Doomstead is delicious, whether in small moments (“brook trout rooting / in loose cool gravel”) or large:

Some things must be listened

into appearances :
the thistles for instance
rustle, sigh into sight,

vatic static in wave
patterns that predict wind
that hits my face; the rain

insinuates itself
slowly into puddles
of an abalone

as a color I hear,
its stiff dry stalks shaking
gray & brown

Teare, it’s also clear, shares with the Romantics a certain solitary streak. Teare feels the social and political roots of white capitalist America’s sick relationship to nature, but he doesn’t try to describe (as, say, Ed Roberson does) the complicated rationality that undergirds this relationship. He’s not a poet deeply absorbed enough in society to apply his attention, or the concrete materials of his poetry, to capturing social systems as such. Likewise, Teare feels desire, is penetrated and caressed and lit up by pleasure, but the poems don’t try to evoke the person of his lover. The lover is there in sexual contact, gone in its aftermath. Teare’s poems are fundamentally alone with their sensibility. Even Pleasure, an elegaic book given over to flares of grief and intense sensual longing, is about the distances within such emotions, the uncrossable gap between one’s flesh and another’s. For this reason, I’m suspicious of the generality of Teare’s amiable touches (“it’s not that I don’t / like people either / our sociality / genitals & smells / interesting diction / surprising privacies / revealed at parties”) or his broadly political gestures (“the limit [between body and world] is learned // & gender teaches / us where to put it if race / doesn’t”). Teare isn’t at home in such broad expressions as he is in his tangible, muddy evocations of place and flesh and restless thought.

What could follow Doomstead Days? Teare’s poetry has opened up, but it hasn’t come unstitched; he finds beauty in nature, but he hasn’t fled into it. Will the next book examine its structural political environment more deeply? Its human relationships more completely? Or will it instead refine the big, strolling, sprout-and-trout-and-mud-and-blood lyric he’s grown into? Whatever comes next, Teare’s poetry matters for the depth of what it can bring to sensual life. Readers will be grateful to encounter our neurotic, medication-swollen, late-capitalist mess of an era alongside a sensibility so evocative and intense.

Jay Aquinas Thompson is a poet and essayist with recent or forthcoming work in Jubilat, Tammy, COAST | NoCOAST, Big Big Wednesday, The Spectacle, and Poetry Northwest, where he’s a contributing editor. He lives with his family in rural Washington state, where he teaches creative writing to incarcerated women.