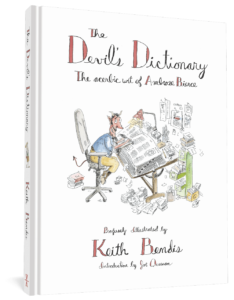 Ambrose Bierce’s The Devil’s Dictionary has had rippling effects in the arts since its publication in 1911, including an excellent essay published by Full Stop on how it inspired the photographer Ralph Eugene Meatyard. It’s also the perfect template for illustrators like Keith Bendis, who over an illustrious career has never found “cynicism of our institutions, the rich, religion, and common beliefs” to be exhaustible resources for satire. Bendis joins the likes of J.C. Suares and Ralph Steadman in illustrating this now classic work of American humor in a beautiful new edition published by Fantagraphics. Over email we discussed how he drew from and differed from these past attempts to bring Bierce’s prose to life, some of his favorite entries in the Devil’s Dictionary, and the joys of being an illustrator during the Nixon years.

Michael Schapira: You’re not the first person to illustrate The Devil’s Dictionary. Can you tell us a bit about who else has illustrated this book and whether you learned anything from them, or whether it was best just to set them aside?

Keith Bendis: The Devil’s Dictionary was illustrated by both J.C. Suares and Ralph Steadman. When I came to NYC in 1975 I took an illustration course from J.C. Besides being a fine cartoonist/illustrator, he was also a well-respected art director at the NY Times. His illustrated version of the DD came out over 30 years ago. I always liked his work and have always kept a copy of his DD in the studio. He came from Europe and his cartooning technique had more of an intellectual/surreal flavor. My work is just funnier and more satirical than J.C.’s. Steadman has been my idol since I first began illustrating. Before I developed my own technique I copied Steadman. His version of the DD is also wonderful, but his large detailed drawings are lost in the very small format of the book. I thought enough time had elapsed between these books that I could do my own take on The Devil’s Dictionary. My work had matured to a place that I felt comfortable doing my own version and not worrying about any comparisons. 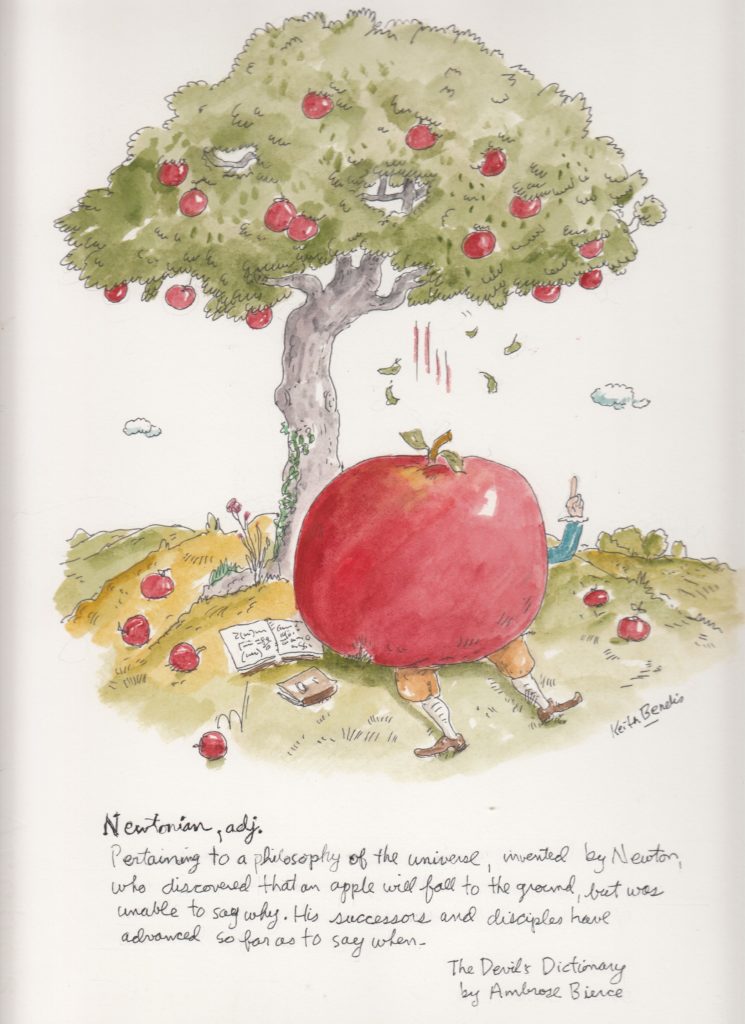 Do you have a favorite entry from the Dictionary?

My favorite pieces in the book are “Bath” and “Guillotine.” I think both drawings are really funny and clever. I particularly like  Bierce’s definition for Guillotine and I think the smoking turtle about to be beheaded is hysterical.

What do you think about Bierce’s sense of humor and tone? Do parts of it seem dated or does it seem appropriate for our times?

Bierce’s humor, for the most part, still rings true today.  One doesn’t usually think about 19th century humor except in the writings of Mark Twain. Certainly, the Bierce’s writing style is a bit more formal than today’s humorists (read Joe Queenan). But his observations are very much on the mark even for today. His cynicism of our institutions, the rich, religion, and common beliefs could have been written yesterday.

I have in my possession some illustrations you did for The Drummer, Philly’s contribution to the Underground Press Syndicate of alternative papers in the 1960s and 70s. They are peak Nixon (and Kissinger, and a little Frank Rizzo) being the most grotesque person that the youth culture could imagine. How exciting was it to have these papers around on the street and as venue for your work when the mainstream political culture was so loathsome?

I went to Nixon’s second inauguration and came up with a cartoon of a grotesque character selling inauguration souvenirs of Vietnamese shrunken heads. I walked into the offices of Philadelphia’s “underground weekly paper,” The Drummer, and asked if they would run it. Not very subtle, but just the right tone of indignation that the underground press loved. The editor asked if I wanted to be their political cartoonist. Over the course of the next 2 years I did a weekly cartoon for the paper. It was the time of Nixon and Watergate and Mayor Rizzo. It was very exciting to get published in an atmosphere of anything goes. 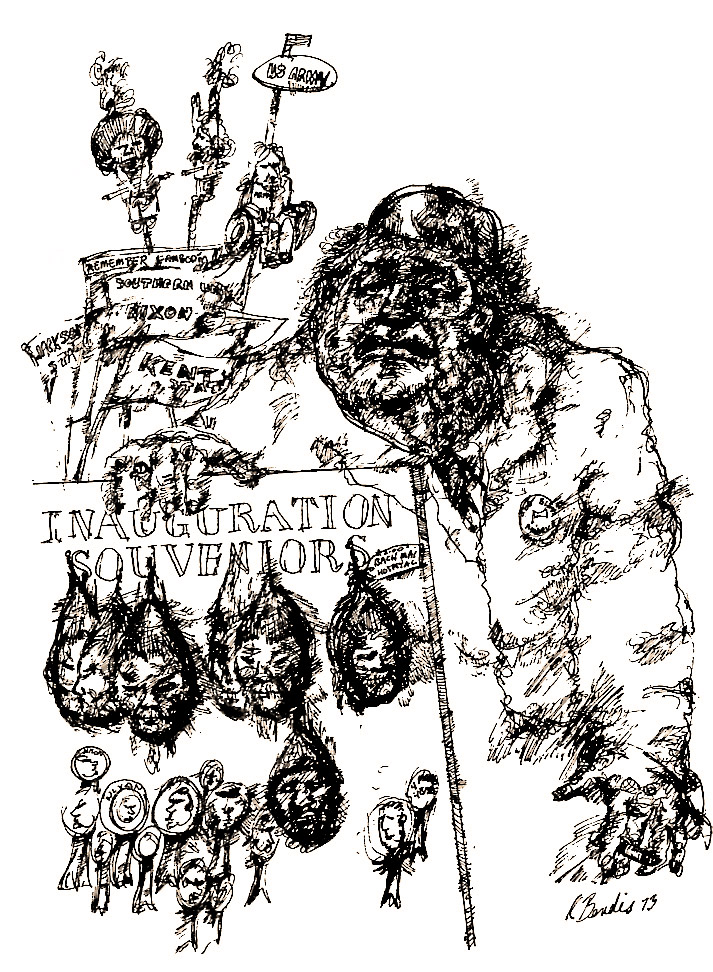 Over a long a distinguished career, what is the strangest room that being an illustrator has ever allowed you to enter?

I had an assignment for GQ Magazine to do a satirical treatment of Atlantic City. Thinking that I was a straight journalist I was given permission to sketch on the floor of a couple of the casinos as well as given a VIP tour of the exclusive suites for the high rollers. Sweet material for a satirist.

You will surely be the only person that I will ever ask this question in an interview. In some ways my existence is thanks to you, as you introduced my mother and father. Any regrets?

Your parents and I agree that I introduced them, but none of us remembers how it came about. I’ve known your dad since 8th grade. He’s a year younger than me. We went to high school together, then he followed me to the same college, and then he followed me to law school at the University of Pittsburgh.  I, however, flunked out after one year and because he can’t draw he actually became a successful lawyer instead of following me into cartooning. Your parents are among my best friends. They have been a very important part of my life. No regrets. 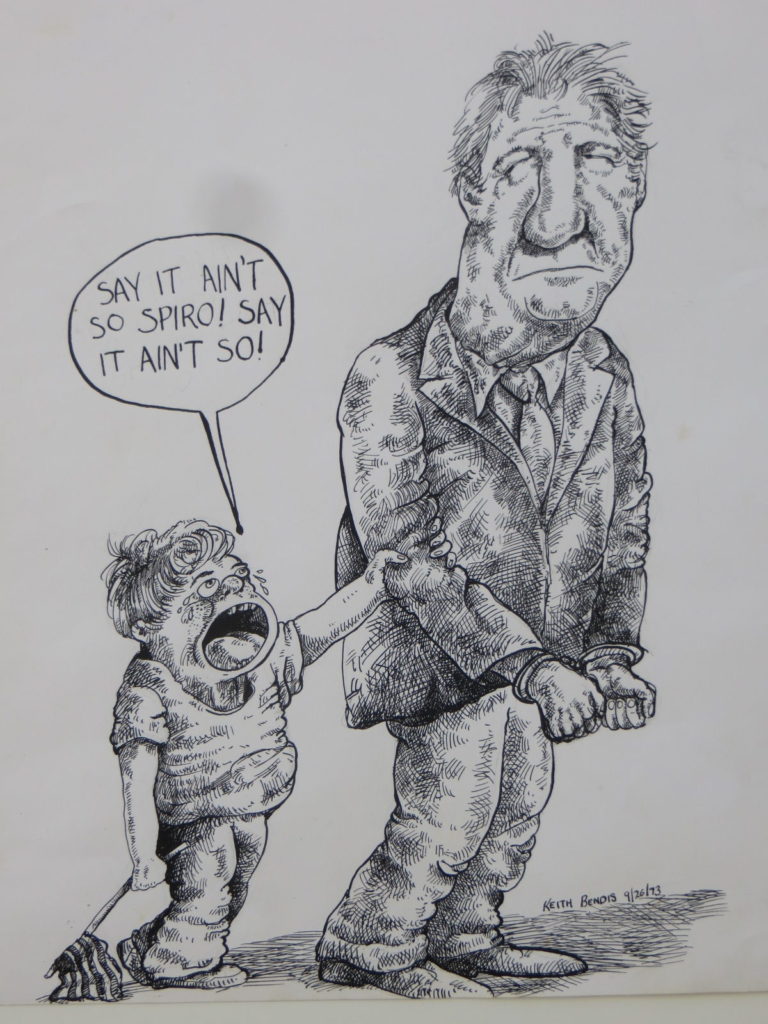