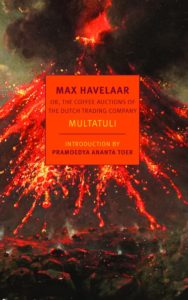 Tr. from the Dutch by Ina Rilke and David McKay

In 1856, after an almost twenty year stint in the Dutch East Indies, Eduard Douwes Dekker—arguably the most disgruntled colonial employee of the nineteenth century—returned in disgrace to Europe to write and, three years later, to publish, under the plaintive pseudonym Multatuli (Multa tuli: Latin for “I have suffered much,” attributed most often to Horace’s Odes), the mistitled satirical novel Max Havelaar or, The Coffee Auctions of the Dutch Trading Company. In a 1999 essay, which serves as an introduction to the new NYRB translation of Max Havelaar by Ina Rilke and David McKay, the preeminent twentieth-century Indonesian writer, Pramaoedya Ananta Toer, called Max Havelaar “The Book that Killed Colonialism.” Ananta Toer’s label is obviously spiced by postcolonial hyperbole—to say Max Havelaar killed colonialism is like saying Rachel Carson’s Silent Spring killed pollution. Yet no anti-colonial tract more effectively debunked the, by then, three-century-old system which—tweaked and window-dressed to pacify the progressives of each generation—had enriched Europe while shredding colonized societies everywhere. Max Havelaar also reminds one of Dutch colonialism’s peerlessly brutal history.

A century before Max Havelaar, Voltaire had tested Candide’s optimism by having him cross paths with a mutilated slave in Dutch Surinam. And, at the half-century mark between Candide and Max Havelaar, the widely read Surinam writings and grisly sketches of John Gabriel Stedman (many of them memorably engraved by a yet unknown artist named William Blake), on the slave revolts, would infuriate and empower abolitionists everywhere. Max Havelaar was suppressed in Indonesia till the Japanese drove out the Dutch in 1942, but since then its translations (to every language from Estonian to Urdu) have flourished in the formerly colonized parts of the world.

In Dekker’s time the Dutch regime in Java sat atop a system of coerced cultivation of high-value cash crops for which the native peasant was paid a cutthroat price set by the Dutch Trading Company, itself a diminutive descendent of far more powerful and rapacious ancestors. The Dutch in Indonesia were by now a second-rate European power—another unshapely piece in the jigsaw puzzle of British dominance in Asia—and their defense relied mainly on security arrangements with their cross-channel allies. Max Havelaar did not reach a wide readership, thus did not shift the public’s opinions about the Dutch East Indies, until the first English translation in 1868. By then (as Benedict Anderson has pointed out), purely on the profits raised on the backs of the Indonesian peasant, the Dutch East India Company had cleared its decades-old debt, Dutch citizens had been gifted massive tax cuts, the national debt had been paid off, and a State Railway system  funded; the Dutch colonial system “made possible … Netherlands’ late passage to industrialism.”

The radicalism of Max Havelaar extends to its avant garde style. In its defense—needed in an age of mainly staid linear narratives—Dekker called his novel a  “Book of Samples”: a compendium of lists, verse, letters and page-long notes. The narrative centers around two characters, representing the two extremes of colonial society. The winners are ably represented by Batavus Drystubble, a rich coffee broker who has been turned by success into a bourgeois prig. At the other extreme is failure: the inveterate scribbler Max Havelaar—a stand in for Dekker—an overwrought, idealistic, impulsive, and, until recently, a mid-level bureaucrat in Lebak (an especially poor province of Java.)

Drystubble and Havelaar had known each other as young men and, at the start of the novel, they meet again, accidently, on an Amsterdam street. Havelaar is now a pauper. All that he has is a bundle of his writings which he manages to pass on to a reluctant Drystubble, who believes all Art to be a waste of time and that people who go in for novel writing “had been led astray in their childhood” and “tend to come to a bad end.” For Drystubble poverty is also a moral failing because “our Lord wouldn’t forsake a man who’s been a faithful servant.” Drystubble would have liked to have burned Havelaar’s writings but his precocious teenage children get a hold of them and (because he likes to censor their lives to hilariously prudish levels) he is forced to read Havelaar’s work where (besides hundreds of articles, and poems in Malay and Javanese which, if anything, confirm his opinion of Havelaar’s mental instability) he encounters some writings on coffee. Coffee—and how to squeeze every molecule of profit by its trade—is the only subject that really interests Drystubble. Recently, however, Dutch trade in general, and the coffee trade in particular, had been the subject of scandal. In a rare flight of fancy Drystubble (he imagines the King, Wilhelm I of Orange, reading his yet unwritten tome) decides that, using Havelaar’s papers, he could produce an invaluable and scandal-effacing book on the coffee business.

There are other twists and turns to Drystubble’s writerly debut. He is illiterate—“business correspondence” is the only writing he does not detest—so he assigns the book project to his son and to an intern at his coffee firm while (not abandoning his supervisory mien) he promises to look in on the work periodically and to supply some chapters himself. And, of course, being one who always works towards well-directed goals, he assigns the book its title ahead of time. Half-way through the book when he is informed that because of the unsuitability of the soil no coffee was grown in Lebak, rather than reconsider the title, like a good capitalist, he titillates himself with the prospect of replacing the soil in Lebak to remedy the unfortunate situation.

The chapters set in Lebak steer close to Dekker’s experiences in Java. The satirical genius that created Batavus Drystubble and his milieu is muted in these sections. There is an element of deep honesty to Dekker’s mild and impersonal representation of Java and the Javanese. All over Asia, an omnipresent veil separated European from native. Their interactions tended to be stilted and transactional. For these sections—which culminate in the tragic romance of a young Javanese peasant couple—Dekker often adopts the hagiographic and pious intonations of Uncle Tom’s Cabin, a mid-nineteenth-century international bestseller. In the dehumanizing estimation of one naysaying contemporary critic—“the Javanese,” he asserted, “have not a vestige of sentiment, and their courtships are entirely devoid of romance”—one might hear echoes of the slave trader Haley who, when told Tom was honest, refrained, “You mean honest” for an enslaved man. Regarding Dekker’s writing on Java, D.H Lawrence wrote that Dekker was “by nature a satirical humorist” whose motivator was a “passionate honorable hate.”  The plight of the Javanese was a “good stick” with which to beat the slippery Dutch bureaucracy in Java and the Batavus Drystubbles of his time.

“The birthplace of the novel,” Walter Benjamin wrote, “is the solitary individual, who is no longer able to express himself by giving examples of his most important concerns, is himself uncounseled, and cannot counsel others.” This was Dekker’s plight in the weeks he wrote Max Havelaar. He was also middle-aged, unemployed, with a wife and son to support, who wrote  “partly in an unheated room, and partly at a grimy, rickety table in a Brussels tavern.” This is where, and why, the satire of Dekker deviates from someone like Dickens, who, in those same years, invented Gradgrind, a caricature in many ways comparable to Drystubble. Dekker had been cut very deeply by society. His hatred of the religious pabulum, the bourgeois sanctimony and  racial superiority greasing the wheels of his mendacious colonial society ran deep. His knife was sharper. His satire does not parade the whimsical like Dickens, or like Lucian, with whom Dekker shares many Menippean traits. Dekker’s satire is revenge. Every time he yanks the pants off one of his victims the reader can hear Dekker laughing maniacally in the background.

If we find Dekker’s tone too strident, it’s probably the sensibility of the modern reader who is accustomed to reading about even the gravest atrocities in crisp, cool, journalistic accounts. But, as Dekker explains, his aim was to write just as a man  cries ‘Stop, thief!’” It is a tone made shriller by its contempt for the very foundation of Dutch socio-economic life that had pushed its author to such straits. Max Havelaar’s  appeal is Nietzschean: it’s an assault on societies which, in the interest of stability, places “a premium on mediocrity.”

Like a true classic, however, Max Havelaar speaks directly to us across the centuries. It sheds the fustiness of its nineteenth-century colonial setting easily because it is a truly modern novel: unmannered, digressive, irreverent, transnational, self-effacing, self-referential, constantly testing its own boundaries. Its subject has lost none of its relevance. The situation of a prosperous Western nation, oozing liberal, egalitarian values and virtues at home, but, for purely economic reasons, propping up and enabling an oppressive authoritarian regime overseas, flourishes today as it did in the nineteenth century.

A View of the Harbour – Elizabeth Taylor