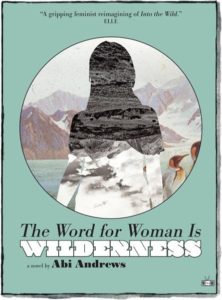 What does it mean to be a Mountain Woman? Is it even possible? are questions that drive Erin, the narrator of Abi Andrews’ debut novel, on her quest to prove herself. Her mind brimming with quotations from Henry David Thoreau and Jack London, 19-year-old Erin heads off from her suburban life in the midlands of England on a solo exploration of Alaska via the cheapest path. Erin frequently compares her experiences to that of Kerouac’s On the Road and philosophies with those of Ted Kaczynski. More of a philosophical musing than a novel, The Word for Woman is Wilderness narrates the struggle of a young woman to find a place for herself in a world that idealizes masculinity and wilderness and that puts nature and humanity in direct opposition, necessitating the destruction of one or the other.

Reminiscent of writings by Annie Dillard, The Word for Woman is Wilderness interweaves contemporary scientific understandings of the natural world and historic accounts of early space travel, linking together the continuing trend of patriarchal conquest in the name of freedom and opportunity (for some). The narrative thread of the novel is simple, moving at the pace of a cargo ship from character to character as Erin travels from Iceland to Greenland and through Canada. Although the characters do not feel fully developed, this seems more an illustration of Erin’s own self-involvement than an omission by the author.

The novel’s structure shifts between journal-like first person narrative, small illustrations and photos, and the transcript of Erin’s haphazard documentary film of her travels. The mini chapters are wonderfully whimsical with titles such as “The Resurrection of Rachel Carson,” “The Pollinator Health Task Force,” “Manned Space Flight is the Trophy Wife of the Super-Phallus” that, when combined with a few sperm whales references, keep Moby Dick lurking in the mind. In imaginative conversation with figures such as Carson, TV adventurer Bear Grylls, and would-be female astronaut Jerrie Cobb, Erin brings to life those people who have constructed her worldview.

Some of the most satisfying moments of the novel are those that grow from tiny encounters, such as when child Erin finds that “[a] snail was sliming its way out of the sparkly white basin” of her toilet and concludes that “drains were now not the portal to the place-of-no-return I had thought them.” Or, as when she moves through a clear-cut and thinks, “It must have stretched for miles, naked and vulnerable like a head shaved for neurosurgery.” Andrews’ surprising descriptions help to keep the novel fresh and provide pleasing relief from what could otherwise become overwhelming with philosophical intensity.

Erin’s definition of feminism as existing by proving that women can do whatever men do and that they can win at a man’s game soon grows old. This version of feminism, so trapped within the definitions of existence offered by the western philosophical tradition and patriarchal norms, is ultimately what the novel seeks to critique. But, as it is the predominant perspective for the majority of the book, it ends up a bit tiresome, in exactly the way the mindset of a obsessive teenager might very well be. Yet, some of the character believability is undermined by the scientific, historic, and philosophic complexity of Erin’s musings, which are more in keeping with the conversations of 30-year-old literature graduate students than 19-year-old high school grads. Given the breadth of her references, it seems implausible that Erin would not realize some of their implications until so far into her journey. Erin ends up feeling like an unwieldy voice piece for what might have been a more interesting and believable discussion coming directly from Andrews.

The novel finally comes into its stride when it lets itself move away from, rather than emulate, the Mountain Men of the world. Erin’s thinking becomes more engaging and applicable to the challenge of dealing with feminism in a time of climate change and mass extinction. The Word for Woman is Wilderness is one of those unusual novels for which I would be more excited to read the sequel than I was to read the original. Ultimately, it is Erin’s unwritten return to life in England that interests me. Although it is done with self-awareness on Andrews’ part, the constant resistance to patriarchal narratives that fills the novel ends up keeping the voices of Kerouac and Kaczynski overloud in Erin’s world. Rather than undermining the patriarchy, such narratives serve to reinforce its powerful position by constantly defining ideas in relation to it. At one point, Erin remarks that nothing in particular has happened to her to make her want to prove herself in the wilderness. It is the lack of experiences afforded to her that spurs her on. “Maybe,” she concludes, “you could say patriarchy happened to me.” And, indeed, this summarizes much of the novel—The Word for Woman is Wilderness might better be named Patriarchy Happens (Even in the Woods).

Bringing together an impressive array of 20th century events and environmental theorists, The Word for Woman is Wilderness provides ample opportunity for thought, even as it can become trapped in its own devices.