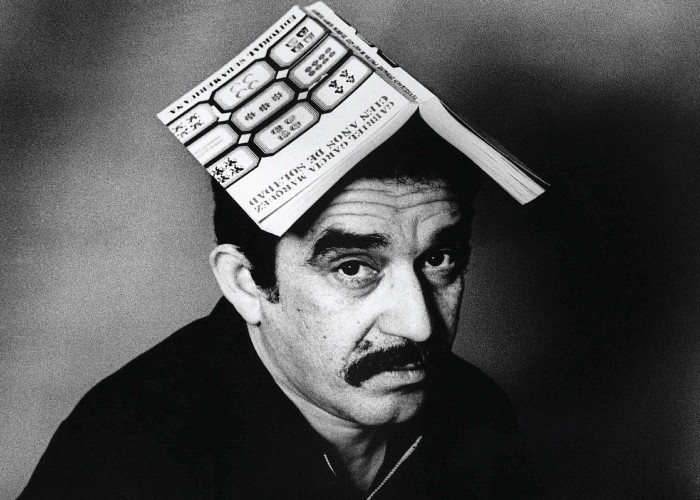 To say Colombian novelist Gabriel García Márquez, known affectionately as “Gabo,” had the gift of gab is an understatement. Best known for his best-selling 1967 novel One Hundred Years of Solitude, the writer had a knack for spinning tales that felt at home in crowded kitchen tables, bustling late-night bars, and sun-kissed domino games out in the park. His were stories that grabbed you with the immediacy of a well-worn anecdote being shared by a friend or a relative. The kind that in theory should have you rolling your eyes or reaching for the coffee cup you’ll need to stay awake, but that in practice holds you rapt, as if spellbound by the beauty and urgency of his tale. His stories sing on the page precisely because they demand to be heard, carrying as they do the echoes of gossip and hearsay Gabo overheard as a child. It’s no surprise to find his collection of speeches, I’m Not Here to Give a Speech (first published in 2010 and soon to be published internationally in translation by Vintage Books) working as a master key to his work.

Despite referring to them as “the most terrifying of human predicaments,” speeches showcase García Márquez at his most congenial. To read this collection—which begins in 1944 when a seventeen-year-old Gabo stood up to give a farewell to the senior class, and ends in 2007 with a speech given shortly after his eightieth birthday in front of the king and queen of Spain in Cartagena—is to witness the growing confidence of one of the twentieth century’s greatest writers. Collected together, they also offer readers yet another chance to relish in the Colombian writer’s language. Whether gently mocking his friend Alvaro Mutis for his handwriting (which “looks as if it were made with a goose feather, by the goose himself”), lovingly talking about Julio Cortázar (“idols fill you with respect, admiration, affection, and, of course, great envy”), or summing up how he’s always understood his native Colombia (a “promethean country that for more than a century has been killing itself in its longing to live”), every line of his addresses reminds us why he was one of the greatest novelists of the twentieth century.

Above all, though, these speeches track the way García Márquez learned to appreciate the value of the anecdote. “I’m not here to give a speech,” he told his schoolmates in 1944 before sharing he’d chosen “friendship” as the subject for his speech. “But what could I tell you about friendship? I might have filled a few pages with anecdotes and aphorisms that in the long run would not have led me to the desired goal.” Instead, he implores those listening to look at their own experiences with the friends now seated beside them to find the wisdom he didn’t feel entitled to dole out.

That pose, of an unassuming writer put on the spot to offer insights he feels ill-equipped to bestow, follows him whether he’s accepting awards in Mexico or toasting his friends in Colombia. But with time, and surely his time as a reporter nudged him towards realizing the power of the anecdote, he found a way to trust his storytelling instincts and ground even his most controversial polemics (say, about abandoning orthography while speaking at the First International Congress on the Spanish language) in everyday moments that could be conjured up as either example or weapon.

When, in 1995 on their way to a conference, politician Augusto Ramírez told him that it was easy to tell when someone had gotten old—“everything he says he illustrated with an anecdote”—García Márquez didn’t miss a beat. “I was born old and all my books are senile,” he joked. The anecdote, after all, had by then become the keystone to his writing. It was the building block that inspired and held up the sprawling lunacy of the Buendía family in One Hundred Years of Solitude, the anchor at the heart of Love in the Time of Cholera, even the chilling real-life incident that animated Chronicle of a Death Foretold. Many of his novels owe their existence to the many anecdotes, both real and imagined, young Gabo heard from his own grandparents while growing up. This is what lent his prose such a familiar rhythm to those of us who grew up in Colombia; they had the feel of a grandmother’s gab session.

As a storytelling unit, the anecdote served the writer well because it depends on specificity but demands to be thought of in universal terms. “When I was twelve I was almost run down by a bicycle,” he told his audience at the 1997 First International Congress on the Spanish Language. “A passing priest saved me with a shout: ‘Watch out!’ The cyclist fell to the ground. The priest, without stopping, said to me: ‘Now do you see the power of the word?’ That day I found out.” This is García Márquez in his element, seamlessly turning a mundane incident into a philosophical fable. Anecdotes shuttle between the abstract and the concrete, stressing, in turn, the fact that stories are bridges meant to bring us together. They may be oft-dismissed as explanatory illustrations but for García Márquez, anecdotes always served as kernels of truth, experiences both whittled down to their most elemental and novelistic tales in need of being fleshed out.

The anecdote was also, for García Márquez, the way to impress upon his readers the reality of Latin America in general and Colombia in particular. “A reality not made of paper,” as he put it in his Nobel acceptance speech, “but one that lives with us and determines every instant of our countless daily deaths, and that sustains a constant surge of insatiable creation, filled with misfortune and beauty, of which this errant, nostalgic Colombian is simply another number marked by good fortune.” Just as his novels vividly painted a portrait of a country that was as beautiful as it was ravaged, his speeches are fueled by the twinned image of his native Colombia one that could only be believed in equally joyful and heartbreaking anecdotes.

The anecdote, despite being rooted in a particular experience, a specific place and time, aspires to be timeless. Something remembered from long ago becomes pertinent to the now; a snippet of a memory all of a sudden holds all the more weight when it serves to illuminate the present. Its usefulness depends on its ability to exist beyond when it first happened, when it was first remembered, when it was first told. (The best anecdotes, after all, are never told just the one time.) Here’s where reading García Márquez’s speeches in 2018 enriches our understanding of the Colombian writer. Despite speaking to specific concerns relevant to the many symposiums, conferences, and award ceremonies he spoke at, his speeches call out to us with the same immediacy he first intended.

At times, they sound as if they were written to address our current era. His 1982 Nobel Prize speech, titled “The Solitude of Latin America,” for example, feels depressingly timely. Talking about “that immense homeland of deluded men and historic women whose endless intractability is confused with legend,” Gabo opened his speech with a powerful account of the ways Latin America continued to feel the ravages of its conquest. The region was still shackled by its inability to live up to the standards set for it by nations and powers that had no interest in seeing it for what it was. Gabo would no doubt be disappointed (if perhaps not surprised) to hear that the statistics he cited about those displaced by violence, particularly in Central America, have only gotten worse. “Since 1979,” he wrote close to forty years ago, “the civil war in El Salvador has produced a refugee almost every twenty minutes. The country that could be formed with all the exiles and forced emigrants of Latin America would have a population larger than that of Norway.” To read García Márquez’s speech imploring his European interlocutors to try to understand the challenges Latin Americans face while news outlets show images of the migrant caravan making its way to the US border, is to be reminded of how little has changed.

It isn’t just that no one heeded his plea to let go of outdated ways of understanding the region (as he put it, “the interpretation of our reality using foreign systems only contributes to making us more and more unknown, less and less free, more and more solitary”). As he warned us over and over, in his novels and in his speeches, Latin America has never been able to escape the imaginary that both created and then forsook it. Better then to ground its history and its possible futures in the anecdotal, in the particular that would then call out to be universalized. This is what drives his work and why magical realism was the perfect vehicle to get these stories out into the world—except García Márquez’s prose never addressed itself at the world. Instead, his words sought out readers as if they were acquaintances, the kind who wouldn’t bat an eye when hearing about races condemned to one hundred years of solitude and who would egg him to keep going, keep gabbing.

Manuel Betancourt is a New York City-based freelance writer. He’s a regular contributor to Remezcla, where he covers US Latino and Latin American film, as well as the film columnist at Electric Literature, where he writes about book-to-film adaptations. His work has been featured in Film Comment, Film Quarterly, Catapult, Backstage Magazine, The Atlantic, and Los Angeles Review of Books, among others. He’s also one of the co-authors of the critically acclaimed graphic novel The Cardboard Kingdom.