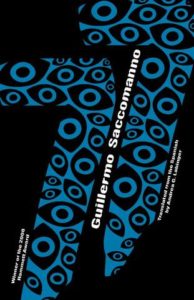 Tr. from the Spanish by Andrea G. Labinger

The word I’m supposed to use is “timely,” as in: “Guillermo Saccomanno’s 2008 novel, 77, set during Argentina’s brutal military dictatorship and recently translated into English, is especially timely.” We are supposed to learn something, as American readers, from Saccamanno’s claustrophobic rendering of the junta — whose CIA-funded terror suppressed leftist politics with nine years of torture, murder, kidnappings, rape, surveillance, and intimidation. In Argentina’s past, we are supposed to recognize a warning of what nationalism can become in our own nation, where “socialism” has, for a hundred years, been a cipher for all things treason.

I don’t write this cynically because Saccomanno has failed, but because American readers have failed. Nor will I say “timely” with any sincerity because narratives of atrocity are always timely. There is always the opportunity to learn. However, it’s an opportunity that requires a will to learn, and the fact that few in my home country seemed to give a damn about the junta when it existed—nor the tens of thousands killed and hundreds of thousands extrajudicially imprisoned — is a lesson in comfort and complicity. The only thing timely about 77 is how uncomfortable Americans have become on their own soil, how suddenly sensitive to the idea of fascism.

Anyway, it’s a great novel. About this, I am sincere, and I wish I wasn’t so angry but perhaps that’s the point. Perhaps this is an anger I and many other readers can use.

77 takes its title from that year, following Jorge Rafael Videla’s coup in 1976. Argentina is entrenched in terror. Police kidnap people in broad daylight and rarely are they ever seen again. No one interferes: “We passengers avoided making eye contact. No one had seen anything. Maybe I hadn’t, either.” Into this, Saccomanno places Gómez, a middle-aged high school professor of English literature who cruises the alleyways of Buenos Aires for public sex with younger men. Gómez is neither a militant nor a dissident, but is nonetheless vulnerable to a regime that demands its citizens be either obedient nationalists or corpses. Videla himself, in 1975, suggested that, “As many people as necessary must die in Argentina so that the country will again be secure.” As with any totalitarian system, this “as necessary” never stops moving. “The military issued an announcement,” Gómez remembers, telling this story to an unspecified narrator thirty years after it happened: “First we will eliminate the subversives, then their accomplices, then their sympathizers, and finally all those who are indifferent or lukewarm.” In this one hears an echo of Hannah Arendt’s warning that, “Totalitarianism strives not toward despotic rule over men, but toward a system in which men are superfluous.” In all movements fueled by death, there is only one destination.

“Terror makes a person more cunning,” Gómez says on the novel’s opening page. “Not more intelligent, more cunning. Like a fox that evades the hunting party. But that survival skill, when it’s honed, becomes madness.” Like any humanist he believes in literature, in poetry and in art. Gómez finds moments to laugh and to flirt. He enjoys reading and hot tea and getting fucked in the ass by strangers. He is living in a system antithetical to all he believes, and — like most Argentines — he lives in it quietly: “If a military raid shook the night with explosions, gunshots, shrieks, and babies’ screams, the neighborhood soothed its conscience by thinking there must have been a reason.” To his fellow faculty, to his students, and to his nosy super, he recites the lines he’s supposed to say, whether Peronist or fascist. He is the ideal subject of totalitarian rule: that is, neutral. At least, to a point.

Because there is always a point. A line. For Gómez, it’s the abduction of Esteban, his favorite student—a charming and beloved “blond ephebe” who wears “a rictus of superiority.” In the middle of class, a police raid takes Esteban out of Gómez’s life, a bit of beauty and delight he can no longer secretly enjoy: “The cops jumped him. They forced his mouth open. They beat him with the butts of their weapons, dragged him across the schoolyard. His blood stained the tiles.” This is a trauma that doesn’t fade like the rest, that can’t be justified or forgotten.

Medicating with sex, Gómez gets mixed up with a fascist cop, Walter. “It’s always a question of who gives the orders and who obeys,” Gómez remembers. “There was no need to state the obvious: I was the one who obeyed. He could have attached a leash to my neck and taken me out for a walk on all fours.” Urged by Esteban’s parents, Gómez shyly asks Walter if he knows anything, if he’s heard anything, about the missing boy. Walter grows suspicious and increasingly cruel, and Gómez is in no position to reject him. To make matters worse, a pair of young revolutionaries — the son of a friend killed in the 1955 bombing of Peronist supporters and his pregnant girlfriend — arrives one evening, needing a place to hide. With Walter’s habit of stopping by at random, Gómez’s mask of neutrality is in jeopardy.

Meanwhile, old friends and new friends demand a sympathetic ear: they’ve turned to poetry, they tell him; they’ve turned to the occult; they cut photographs of Videla from the newspapers and pierce his eyes and slip them into the locked bedrooms of their disappeared children. A fellow professor, “a military sympathizer,” applies “medical terminology to politics. Cure society. Cut out the rot.” Another escapes to Patagonia — “a refuge in the clouds.” His replacement, suspiciously installed and promoted, accuses Gómez of being cursed: “You’ve got a spell on you. That thing they call the evil eye is negative energy that has invaded you… What’s your sign, Gómez. Maybe I can help you.” No one is a safe confidant because everyone is a liability. Anyone can be tortured, even Gómez himself, despite harboring two people he comes to love very much: “To escape,” he admits, “I would name anyone.”

A necessity of tyranny is this isolation, this atomization of individuals into solitaries unable to love or trust one another. Tyranny cannot exist, as Arendt writes, “without destroying the public realm of life, that is, without destroying, by isolating men, their political capacities.” Other people, Gómez thinks, have it so easy, living without worry: “I would have liked to be just one more like them. But I wasn’t like them. I was different. I could blend in with them, but I wasn’t like them.” But this is what he’s meant to think, he realizes: “Because one of them might be like me. And that other person, like me, would be pretending in order to keep going.” Totalitarian rule takes tyranny even further, Arendt writes, and “destroys private life as well [as public]. It bases itself on loneliness, on the experience of not belonging to the world at all.” In Gómez’s world, Arendt’s claim that, in loneliness, “man loses trust in himself as the partner of his thoughts and that elementary confidence in the world which is necessary to make experiences at all,” is so sadly apt that the reader’s grief for what is lost — that is, the ability of human beings to connect with one another — is palpable; and yes — quite regrettably timely.

Another necessity of tyranny is submission, and on this Saccomanno has built a brilliant fugue. If you don’t fall on your knees, psychologically, and feverishly welcome Videla’s regime, you might fall on your knees and choke on a corrupt cop’s dick while he pulls your hair. You might surrender your will to the spirits who will help locate your missing child. You might travel deep into the provinces to visit a psychic, only to be turned away. You might hand over your life to an armed resistance with dogmas of its own. You might abandon thought and speak in metaphors that flatten other human beings, or you might, like Gómez, abdicate to literature itself, which, “in its pretension, confused history with the activity of bodies and the conclusions that could be drawn from their behavior.” Societies most vulnerable to fascist rule are already in some way damaged, peopled by the exhausted, the worn out, the lonely and afraid—by all those who wish to hand their life to someone or something else, whoever or whatever promises to say, “I’ll fix this, don’t worry.” You might, in twenty-first century America, find refuge in memes or in hats with slogans. You might turn to the angriest pundit and call them the voice of reason.

But above all, tyranny requires terror, and — as Gómez announces on that first page — 77 is a novel of terror. Gómez tells the story of how, “Terror took over, first in small matters, until it invaded even basic language functions, the language of thought, the language of speech, written language, body language, each and every gesture.” And terror isolates. It is the totalitarian separator, its highest form of governance to which one either submits or resists under threat of total erasure. One of Saccomanno’s immense triumphs in this novel is to eradicate whatever imagined solidarity, whatever togetherness, readers are tempted to overlay onto Professor Gómez’s life in 1977. The story one wishes to hear is how people band together, how they hang onto their humanity. As the vanished bodies add up and Gómez grows more and more alone, it becomes clear that the genius of 77 is not that humanity endures such overwhelming and invasive terror, but that it doesn’t. It can’t.

As American readers, shouldn’t we already know that? Have we learned nothing of terror after centuries on this continent, stenciling our fears onto others, isolating ourselves, submitting to harmful and stupid ideologies? Have we not created a cheerful, expensive — even fun — loneliness like no other in history, and has it not damaged us? I am — as we all should be — grateful for 77 and all novels like it, not to mention ashamed that my own country created the circumstances that inspired it. But I hope, very soon, we can start learning from them, to recognize atrocities for what they are. With our current president, it’s clear that the so-called war on terror has already come home, that millions of our own citizens no longer fit the mold of what an American looks like, but there’s time yet, if we imagine it, to stop this death-fueled movement before it totalizes altogether, before we all become superfluous.

Patrick Nathan‘s first novel, Some Hell, was published by Graywolf Press in February of 2018. His writing has appeared in Gulf Coast, the Los Angeles Review of Books, Literary Hub and elsewhere. He lives in Minneapolis.

The Diaries of Emilio Renzi: A Day in the Life – Ricardo Piglia