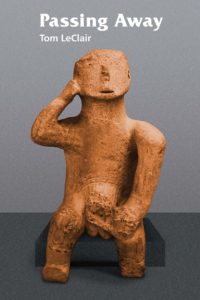 It is certainly possible to read and appreciate Tom LeClair’s new novel, Passing Away, having no acquaintance with the previous works in what is now a quartet of novels whose titles are variations on the idioms of “passing” — Passing Off (1996), Passing On (2004), and Passing Through (2008). But readers who are familiar with the preceding books will surely believe their reading experience to be enhanced by a familiarity with their in-common protagonist, Michael Keever, a quasi-professional basketball player in the first novel, who in the subsequent installments becomes an entrepreneur of sorts, and then a writer. Among other things, an awareness of Michael Keever’s predispositions and behaviors as chronicled in the earlier novels could illuminate the unorthodox structure adopted in Passing Away: two of the novel’s three sections are actually themselves works of fiction attributed to Keever, who appears to have progressed from a writer of nonfiction (and a human being) with a gift for fudging the truth to one unabashedly writing fiction.

Knowledge of the first three “Passing” books could especially be useful when reading the new novel’s other section (sequentially the first), which is presented as a more conventional first-person narrative extending the portrayal of Michael Keever’s experiences featured in the prior novels. This account (also the longest piece in the book) relates Michael’s trip to his home state of Vermont to assist his brother, who is dying of cancer. From the previous books we know that Michael’s relationship with his brother Patrick is unsettled — in Passing Through Michael discovers that Patrick has sold off most of their inherited land for the construction of summer homes, without telling Michael about it. We have also learned from their interactions — mostly on the phone — about their childhood lives in Vermont, marred by the suicide of their mother, as well as their father’s subsequent death in somewhat suspicious circumstances (his car plunged into a river in what was declared an accident). Michael believes his basketball career enabled him to “escape” the dreary conditions that dominate his memories of Vermont, while Patrick chose to stay, for reasons Michael has never really understood.

Michael discovers as well in Passing Through that Patrick has used the proceeds of the land sales to further his gambling addiction, which has placed him in jeopardy with the loan sharks to whom he turned when the real estate money was used up. After Michael drives Patrick back to Vermont — Patrick has suddenly shown up at Michael’s house, claiming to be running from the loan sharks — he tries to help his brother face his impending death with at least a minimum of dignity and order (and in the process reconcile himself both with Patrick and with the course of his own life), although finally the end is not as serene as either would like. Ultimately both men have to reckon with the consequences of the decisions they have made. “Before he was passing away,” Michael writes, “I never thought about our shared past. Where in our history was the gate, the switching point? Pat here, Mike there. . . .as Pat’s future shrank, my curiosity about the past expanded.”

Perhaps this renewed interest in the past — not just his personal past — accounts for the two stories written by Michael Keever that follow “Passing Away,” both of them about notable historical figures from new England. “The Last Days of Calvin Coolidge” purports to be a digest written by the Vermonter Coolidge, a kind of supplement to his autobiography. Written not long before the former President’s death, in the digest Coolidge allows himself somewhat more honesty than he did in the autobiography, about his New England roots, about his marriage, about his image as “Cutting Cal,” the enemy of government waste, and as “Silent Cal,” the stoic politician. He seems especially intent on dispelling any lingering impression of stoicism about the death of his young son, John, during his tenure as President, which in this rendering is perhaps the main contributing factor to the digest’s prevailing tone of melancholy, which even has Coolidge sounding suicidal.

“The Emperor of Ice” takes the form of a “Letter for the Future,” supposedly written by Fredric Tudor, also a historical figure, a 19th century businessman popularly known as the “Ice King” for his state-of-the-art method of shipping ice — harvested from New England ponds, including Walden Pond — around the world. The letter is meant to accompany Tudor’s “Ice Diary” (alluded to but not shown to us), but Tudor’s widow has allowed family and friends referenced in the letter to annotate it, clarifying and, in many cases, correcting it. The widow, Euphemia, has the last word, and she asserts in the final entry that “The ‘Letter’ was for others in the future but also for himself in the present. I believe Fredric felt that when he was writing, he was not passing away. He was doing, acting, still dictating.” By this point the reader of the “Passing” novels must surely conclude that something like this is what writing has come to represent for Michael Keever as well, although it may be that he has also discovered the limitations to his desire to “dictate.”

This book’s title clearly enough signals the preoccupation that unites the three pieces, even if it is attributed only implicitly to Michael Keever in the two stories he purportedly writes. And indeed, Michael has expressed anxieties about — if not outright fear of — death in the entire quartet, but most especially in Passing On, in which he spends most of his time escorting dying people on “terminal tours” of places they wish to see before “passing on.” In an “Author’s Note” at the end of Passing Away explaining its “odd combination of memoir and fiction,” Michael indicates that he hoped through this form to get “outside my time, out into a history that my sojourn with Patrick in Vermont suggested. I wanted to investigate and imagine how men in earlier times accepted or evaded their dying — to see what they, like Patrick, could teach me about my own mortality.” “Passing Away,” of course, can refer not only to human mortality but to the constant passing away of the past, a connotation that provides additional unity to a set of pieces that could at first seem too formally and thematically disparate to warrant the claim that all of the book’s parts add up to a novel.

Passing Away is the most formally adventurous of the “Passing” quartet — the other three are more or less conventional first-person narratives (although notably the first half of Passing Through is narrated in the third person, before Michael reasserts his own voice, partly as a response to the unbridled subjectivity of Michael’s writing students). This is perhaps surprising given that as a critic LeClair has focused on unconventional writers (The Art of Excess, in my view one of the best studies of postmodern fiction), and in particular on Don DeLillo (In the Loop, probably the book with which all students of DeLillo’s work should begin). There is variety in the novels’ strategies, however. Passing Off and Passing Through are more specifically about Michael’s personal circumstances than Passing On, in which Michael directs his attention to the circumstances of his dying clients, so that at times the novel conveys an impression of objective reporting more than subjective disclosure. If Passing On could be described as an elegiac travelogue of sorts, Passing Off might be called a sports novel, although one that also evokes a much broader and weightier context, reminiscent perhaps of DeLillo’s End Zone, while Passing Through could be regarded as an academic novel that mutates at the end into a political thriller.

Moreover, the multifaceted gerund “passing” ultimately itself operates not just as a convenient way to title a sequence of linked novels, but helps to bring a larger coherence to the whole set when considered together. Michael Keever most directly faces the reality of “passing away” in the fourth book (as it palpably envelops a family member), but he has contemplated the prospect of imminent death in all of the previous books, not just in Passing On, the title of which so closely echoes Passing Away and in which Michael encounters death almost as emphatically. At the conclusion to both Passing Off and Passing Through, Michael is involved in ventures that expose him to risks that could plausibly enough result in his own death. “Passing Off” is the trope animating the first Michael Keever novel, arising from the literal description of his primary role as a basketball player — a point guard — but extended in all of the novels to encompass Michael’s general talent for fake-out and deceit. (Including, as it turns out, all of Passing Off, which, he informs us in the follow-up, was actually written by his wife.) One could say it is this talent that in turn makes it seem that Michael is just “passing through” his life, never settling in (at least after basketball) to pursue a single vocation nor even to cultivate an entirely perceptible or coherent identity.

It would seem, however, that in his final incarnation Michael Keever is now more permanently passing himself off as a writer. Michael’s journey from ersatz writer to actual writer provides another kind of coherence to the four books, although the notion that he might have the skills and perspective of a writer isn’t suggested directly until book three. Still, even Michael the playmaking guard and the scenario-creating tour guide reveal the inclinations of the writer he starts to become in Passing Through, the process apparently entirely complete in Passing Away. Indeed, in Passing Through we witness Michael working through, both with his students and in his own writing, the hesitations and uncertainties writers undergo, especially in sounding out the borderlands between fiction and nonfiction. Passing Away shows this to be a continuing concern for Michael Keever, in its own mixture of fiction and nonfiction, as well as in the origin of the fiction in historical fact. If Passing Away is indeed the final installment of the Michael Keever story, he appears to have reached a point of agreeable stasis in his decision to pursue writing as an occupation — a game that promises more longevity than basketball.

In the Author’s Note, Michael cites the final word of Updike’s Rabbit quartet — “Enough” — to assert an end to his own series. The “Keever Books” don’t much resemble Updike’s famous novels, other than through the most obvious parallels: four novels about a basketball player after his heyday. LeClair does not use Michael Keever to chart historical developments in American culture, arguably Updike’s primary motive in chronicling the life of Rabbit Angstrom (at least after Rabbit, Run). The “Passing” novels have more in common with End Zone and Robert Coover’s The Universal Baseball Association, both of which LeClair has named as inspirations for writing Passing Off. Passing Away is both the most thematically focused and most formally innovative of the Passing novels. Although its more “crafted” qualities perhaps have the effect of restraining the digressive tendencies that are actually part of the appeal of Passing Off and Passing Through, it may most adeptly assimilate the influence of those adventurous writers whose work Tom LeClair the critic has so usefully illuminated.