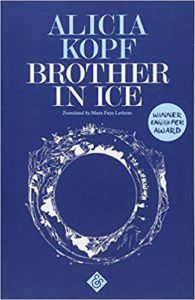 Tr. from the Catalan by Mara Faye Lethem

Catalan writer Alicia Kopf’s polar obsession started around the time of the 2008 financial crisis. Struggling to make a living as an artist she began dreaming about ice, which, in turn, led her to begin researching others, like herself, who had also been drawn to the white, frozen spaces of the world.

Like many before her, she was inspired by the stories of the early-twentieth-century pioneers of polar exploration: the infamous dispute between Frederick Cook and Robert Peary over who reached the North Pole first; the race to reach the South Pole which ended in Roald Amundsen’s victory and Robert Scott’s tragic failure; and Captain Shackleton’s disaster-ridden attempt to cross the Antarctic. Yet, unlike others, Kopf’s interest in the arctic explorers lay not in celebrating mankind’s desire to conquer the earth’s inhospitable North and South Poles, referred to by the writer as “a geographic goal as intangible as a few coordinates on a map.” Instead, she found a mirror of her own precarious situation as an artist living in post-financial crash Spain and the inspiration for her debut, Brother in Ice — a novel which is and is not about the explorers of the “so-called heroic age of polar expedition.” For as Kopf states in a passage that eloquently sums up this difficult-to-define text: “I’m not interested in the polar explorers in and of themselves, but rather in the idea of investigation, of seeking out something in an unstable space.”

Defined by publisher And Other Stories as a “hybrid novel–part research notes, part fictionalized diary and part travelogue,” this genre-defying book does indeed occupy an unstable space in which Kopf envelops the history of the polar explorers in a broader examination of ice as metaphor: for the writer’s complicated familial and personal relationships, for her creative development as an artist, and for her relationship to her autistic brother, the brother in ice in the book’s title.

To do so the “novel” does away with any conventional understanding of plot and narrative arc. Instead it is structured in a series of fragmentary vignettes that range from the writer’s research notes on the history of the Polar regions, to philosophical musings on the meanings of ice and autism, diary entries that explore Kopf’s childhood, family, and sexual relationships, and her precarious professional life as an artist; ending with a travelogue of her visit to Iceland. All of this is interspersed with numerous ice-related illustrations — reflecting the genesis of the book in a series of art exhibitions called Àrticantàrtic — alongside the insertion of documentary photography from the era of arctic exploration, as well as other media such as film stills, extracts from newspapers and scientific journals. Originally published in Catalan as Germà de Gel, then self-translated by the author into Spanish, Mara Faye Lethem’s sophisticated English translation expertly captures the conceptual sharpness of the book, as well as the shifting narrative tone: from scientific detachment, to autobiographical confession and literary reportage.

Although the miscellaneous nature, and often scientific and historical tone, of Brother in Ice echoes the conventions of the literary essay — or could be analogous to a carefully curated exhibition — Kopf’s use of autobiography is what clearly speaks to our current literary moment. The text has been compared to the recent vogue in writing labelled under the neologism “autofiction,” referring to works of fiction with overtly autobiographical elements or a form of autobiographical writing that is clearly fictionalized, using the aesthetic and stylistic forms of literature. Over the last decade or so autofictional texts have become increasingly prominent in English language literature and English language literature in translation, as exemplified by the work of writers such as Rachel Cusk, Sheila Heti, Olivia Laing, and Karl Ove Knausgaard. While Kopf has acknowledged the influence of authors such as Knausgaard, her work also points to the extensive use of this hybrid literary genre in Spain and Latin America as represented by established authors including Javier Cercas, César Aira, and Enrique Vila-Matas, as well as new works of autofiction recently published in English translation, such as Lina Meruane’s Seeing Red (Deep Vellum, 2016).

According to French writer Serge Doubrovsky, who coined the term in the 1970s, autofiction’s fictionalization of the self was not only a stylistic choice but a sociological one. If autobiography is the chronological account of the lives of great men, autofiction delves into the minutiae of the life of a “nobody,” aiming to push the boundaries of what our understanding of the self is. Following this, it comes as no surprise then that the genre has also become associated with minority and women writers, seeking forms of self-expression outside the constraints of the “I” of realist fiction. As Kopf declares in Brother in Ice: “Third-person narrations are security fences. Omniscient narrators, pure arrogance. Perhaps I think that because I’m not an author, just an explorer of my limited textual possibilities.”

In this way, the history of polar exploration is reconfigured in the book through a postcolonial and feminist lens. The aims of the heroic age of Antarctic exploration are exposed by the writer as quests into nothingness, the moment of conquest depicted as the unstable moment in which an explorer, lost at the poles, “decides to plant a flag in the middle of a field of white.” The epic stories are thus boiled down to blurry, and falsified, proofs of victory and conquest — and are ultimately represented by Kopf’s comparison of the two photographs depicting Amundsen’s and Scott’s arrivals at the South Pole:

On January 17, 1912, Scott reached the South Pole. The photograph he took there documents his failure — arriving in second place — after Amundsen got there on December 15, 1911. It is a full shot of a group of men, isolated on the Antarctic plain, in profile before a tent that flies a Norwegian flag. The photograph of Scott, who arrived a month too late and found proof of his defeat, documents his own bleak state. The comparison between the photos is terrible: the victory is cold and the defeat is epic.

Yet Kopf doesn’t simply rewrite the masculine epic journey as one of defeat. Instead, it becomes a source of metaphorical inspiration for Kopf’s own creative leap into the unknown and her extended reflection on the fraught relationship between being a women and being an artist. Kopf sees the precariousness of the arctic explorer as paralleling her own struggle as a female artist living in Spain after the 2008 financial crash. The masculine imperial quest is therefore appropriated as a metaphor — the seeking of meaning in instability — that can be reconfigured as a “new epic, without foes or enemies; an epic involving oneself and an idea. Like the epic that artists and writers undertake.” The creative appropriation of the arctic explorers thus forms part of an extended reflection on selfhood — and the possibility of expressing this through art — which is furthermore reinforced by how Kopf (real name Imma Ávalos Marqués) writes under a pen name taken from a character in the writer’s first book — a headless girl in search of her identity.

As an academic, what I found particularly innovative about Kopf’s fictionalization of the self was how deeply embedded this was in a research project that deftly moved from the personal to broader political and cultural reflections. The book includes beautiful nuggets of information, such as the story of the creation of artificial snow by the nuclear physicist Ukichiro Nakaya and the history of the snow globe, as part of its broader meditations on ice and its significance. Yet, at each turn these socio-cultural reflections — on, for example, the imperial history of the arctic explorers — are embedded within Kopf’s analyses of her own personal experience. In this sense, the autofictional text could also be compared to the research practice of autoethnography, which challenges the canonical forms of anthropological research, with all its colonial baggage, to use personal narratives to illuminate cultural phenomena and challenge any pretense at objectivity. Thus, for the researcher, Brother in Ice is comparable to the anthropological fieldwork notebook, which in the words of ethnographer Michael Taussig can also be considered a type of modernist literature where creators and artists explore the “imaginative logic of discovery.”

While the book’s extended metaphor is expertly used by Kopf to make deeper points about conquest, empire, and (artistic) exploration, the central image of Brother in Ice — ice as metaphor for the writer’s autistic brother — left me with a series of questions about the difficulties and ethics of representing a disability such as autism. Coming at a time in which there is a greater visibility of autism in popular culture and the arts, as well as a more varied representation beyond the stereotypes, such as the “autistic savant,” Brother in Ice does advocate for a more complex representation of the autism spectrum and science’s failure to define it: “for years doctors have given my brother different names, depending on the pathological trend at the time.” However, the need for a more complete understanding of the heterogeneous experiences of autism is slightly undermined by the metaphor of Kopf’s brother as “a man trapped in ice,” which presents him as an enigma, like his condition, and doesn’t completely allow the reader to imaginatively engage with the lived and messy reality of autism.

Kopf is obviously aware of this. She self-reflexively questions the ethics of representing her brother, “I wonder if recreating you here will do us any good,” and acknowledges that the book is not about her brother’s life but “the search for the origin of a voice and gaze of my own.” And this could actually be one of the major strengths of the book: its artistic exploration of complex familial relations and the meanings of sibling relationships. Kopf, like other new autofictional writers exploring the experiences of being a sibling, for example Julián Fuks or Daniel Mella, bravely bares the ugly reality of personal relationships. She exposes her own feelings of abandonment by her family and her neediness — “I guess my brother loves me but I don’t have much empirical proof” — as well as the added sense of responsibility of being a sibling, and an artist, with a dependent brother: “The advantages of having a brother with a high degree of dependency is that you can’t let yourself go.”

Writing this review I continuously found myself getting stuck, struggling to summarize the rich layers of meaning generated by Kopf’s work — a struggle she acknowledges within the book: “I often find myself getting stuck in this project. I see nothing before me, just white.” Therein, I would argue, lies Brother in Ice’s most valuable contribution. It is Kopf’s ability to innovate with form, to curate fragments into a meaningful whole, and to create something out of instability — the shifting landscapes of the poles — that makes this book particularly relevant for the present moment, a courageous attempt to explore artistic creativity and the human need to relate to others and the world around us. As a vehicle for exploring ice as a metaphor for literary creativity (and experimentation) in precarious times, Brother in Ice couldn’t have found a better home than its innovative British publisher And Other Stories. Also tracing its origins post-financial crash, it is one of a number of new publishing houses providing a creative response to the failure of commercial publishing to take risks on new literature. Their response, as they state, has been to update an eighteenth-century idea for the twenty-first century — crowdfunding their publications through a subscription scheme — that parallels Kopf’s feminist and postcolonial updating of an explorer’s diary.

Cherilyn Elston is a lecturer in Latin American Cultural Studies at the University of Reading, UK. She is the author of Women’s Writing in Colombia – An Alternative History (Palgrave Macmillan, 2016) and the translator of Jorge Consiglio, Southerly (Charco Press, 2017). She is the managing editor of the online literary translation journal, Palabras Errantes: http://www.palabraserrantes.com/