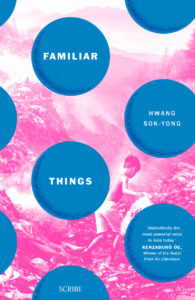 The massive global issue of dealing with our waste often lacks a human face. Videos of turtles tortured by straws or birds with stomachs filled with plastic dominate its imagery. Children’s films such as Wall-E or Isle of Dogs present the enormity of our waste problem, but leave people at a comfortable distance from its stench. Familiar Things by renowned South Korean author Hwang Sok-Yong offers a vivid reminder that our mountains of detritus are also a human issue.

Bearing a pitchfork and a bag for valuables, 13-year-old Bugeye and his mother bundle up in cast-off protective clothing and join the crew of trash sorters who glean plastics, metals, and other rejected items. They represent two of the estimated 15 million people who scavenge at municipal dump sites around the world in order to survive. Hwang Sok-Yong’s novel presents a blunt portrayal of the marginalized lives of those who live on Flower Island, a once fertile place that has become the landfill for a nearby city.

Bugeye’s life has never been easy. He grew up the child of a street vendor, who was herself raised in an orphanage. When the novel begins, Bugeye’s mother has just determined that there is more profit to be made recuperating the rejected wares of others than there is in selling new ones on the street. She and Bugeye cross over into an underworld worked by the living where all of the familiar items of life are still present, but appear half-buried beneath fill dirt or grotesquely enlivened by the seething of maggots.

But the transition to life on Flower Island does not only offer horror. Familiar Things makes clear the degree to which life as a garbage scavenger offers Bugeye and his mother a modicum of independence and dignity in comparison to the other options available to them. Their work is putrid and dangerous, but it is also honest and sufficient for obtaining their food and shelter. In the tradition of social realism, Familiar Things reveals aspects of our current throw-away system that are intentionally kept out of sight. But it is not only a Jungle-esque activist exposé. It is also an engaging coming-of-age portrait of Bugeye and his adoptive kid-brother, Baldspot, that emphasizes their relationships and growth as much as their suffering. Although Hwang Sok-Yong describes a world that is terrible to imagine, he does not fetishize it. Monstrous events occur, but the descriptions do not revel in the graphic details such that they become offensively gratuitous. Familiar Things’  language is simple. It does not linger in metaphor or unusual turns of phrase. Sora Kim-Russell’s translation feels unstilted and easy. The novel’s uncomplicated style suits its purpose, presenting determined existence rather than romanticized horror. The plain prose also conveys the great sadness of the novel without becoming saccharine.

The youth of the characters encourages the reader to keep wondering about their futures, but the novel also relates the island’s history to its present inhabitants. Flower Island is haunted by the ghosts of the farmers whose lands were claimed and polluted by the deluge of trash. The novel remembers what is buried beneath the landfill and the wonders what may grow back through it. At the same time, the boys are submerged in the two-dimensional underworld of Super Mario on a beloved Gameboy. They must balance remembering and disappearing, escape and escapism.

Though the setting and plot draw from the treatment of and events on Nanjido off the coast of Seoul in the 80s, the novel’s lack of named specificity allows it to represent all such places. The people of Flower Island smell of the rotting remnants of someone else’s life and are sent to the back of buses because of it. In its understated way, Familiar Things offers a searing criticism of the ease with which the Haves scorn the Have-nots for showing signs of dealing with the mess the Haves created. Those thrown out by society survive on its rejected materials. This emphasis on how many people can live on the trash of others is a reminder of how thoughtlessly those with means toss valuable items away to be buried and release methane gas into the already overburdened atmosphere. Indeed, considering that about as many people live and work in such a situation as are in all of Sweden and Norway combined, it is important to think of the setting not as the impossible spectacle of a Pixar film, but as a complex, lived reality. Familiar Things challenges readers to see everyday objects in an alternate light, while also understanding that this life of scavenging is a familiar one for many people.

Through its name, Flower Island ironically testifies to the nature that once made the area remarkable for its beauty and capacity to grow. As they seek their place in the world, the boys navigate the lingering spirits of the island’s agrarian past and the layers of modernity smoldering on top of it. In offering this palimpsestic vision, Familiar Things remembers what verdant life once thrived on that island and, through that remembrance, offers its hope for resilience.