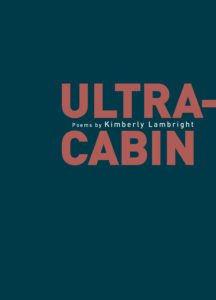 The poems of Kimberly Lambright’s debut collection, Ultra-Cabin, which won the 42 Miles Press Poetry Award, defy definition, literally. Lambright’s poems retain the act of definition as a way of making meaning even as they acknowledge the contingency of all categories. Like the poems of Sharon Olds or Ashley Capps, they are invested in the world of matter, but they are also attuned to the way that everything structured is also unstructured. In this way, Lambright’s poems gesture toward W.S. Merwin, Laura Kasischke, and other poets in whose work oppositions dissolve. For Lambright, what is worth writing is what is new, not for the sake of some narrowly-acting sense of novelty, but because she is interested in new ways of understanding knowing and being, and she is acutely aware of how other attempts at this have fallen short.

The poems theorize existence in a way that is both poststructuralist and phenomenological; they describe and imply compartments and categories, which sometimes beckon as desired places of rest and sometimes fall away disappointingly. The first poem, “A Limit Situation,” presents an elegant suturing of discreteness (the promise of measurability in “the calculation,” “the law,” and the conceit of the multiple-choice test) and the infinity of unknowing suggested by “partial knowledge.” The comparison suggested by “the other wife, in the other state” is trickier than it seems; by foregoing the label of “the other woman,” the speaker redefines the limits of her situation. Who is the wife, and who is the other wife? But it’s more like a reshuffling than a redefinition. Like the poem’s “you,” who talks to the speaker “in levels,” the speaker holds up various affective possibilities. The claim, “Like a standardized test, I’m made / to instigate guessing,” does not come off as coy because the poem, and the collection, argue for a serious consideration of the kind of guessing that constitutes living.

In “Southern California Announcement,” which begins, “You’re really getting places / reading that Bible over and over,” an ominous circularity prevents things from moving forward: “the batter / in the kitchen circled for hours”; “You move / your dull body from room / to room . . . ” The limits described by the Bible, and by a particular definition of Christian, stalk the poem, and no room in the house is a good room. In poems like this one, categories are oppressive and even violent, and a more vibrant life comes from resisting them.

But definitions are also generative in these poems, as in “(Re)lent”:

He needed that lack
of spin, the holy spring

Hers was a rust
rainbow, pinked-out edges

The poem is charged by the speaker’s claim for self-definition. But furthermore, images of color and light, in this poem and others in the book, refuse to be symbolic or secondary in any way to the philosophical claims in the poems. The rainbow is not a symbol for the poem’s Lenten spring; its pinked-out edges are intrinsically worthy. In other words, both the speaker and the rust rainbow with pinked-out edges assert the right to describe themselves. The stunning final claim asserts the importance of meaning-making not only at the level of individuals, but also at the level of ideas. These lines insist that the material-spiritual world is still fresh. It’s an optimistic attentiveness that honors bleakness as well as hope. Lambright’s aesthetic sensibility allows her to forge original compositions that are feeling-based and philosophically complex.

In Ultra-Cabin, these shifting but precise rooms, values, and categories sit alongside the kind of vagueness that subtends existence.  A sharp poem called “The Cardboard Floor Stuck in Sick Brown Light” states, “Freud wandered Vienna / with a brain full of energy / and called it the unconscious.” Lambright is comfortable moving between the thing and its name, dexterous in revealing the act of definition and the effects of that act. The poems invite a reconsideration of what it means to be directed, oriented, connected; how we discern our relationship to other people and things. “Nor is There Anyone But Us” begins, “East Village bars all lit up with punk. / The generation surges and I live after you.” This “you,” with “a house and new neurosis. A baby / named Kathy,” has divided the speaker’s life. But a later stanza complicates the sense that this is a poem about the narrow focus of heartbreak:

What is this distance
to the door, the word
to close the word.

The poem is about being in relation to the concrete and abstract entities of the world — what to do with the distance to the door, the room around you, all the words. In this poem and throughout the collection, the unnameable rises up formidably, through and around the nameable items. This unnameable element has to do with relationship: between the mind and the world, or between people. Here again, Lambright’s collection suggests that the definitions constructed and reinforced by culture get in the way of living truthfully. Or: that in order for our definitions to work for us, rather than against us, we must be constantly interrogating them with a spirit as perceptive as hers.

To say that Lambright’s poetry approaches concreteness and veers away is to assume that we know what concreteness is, and so trying to talk about Lambright’s poems reveals how insufficient and ill-fitting are many narratives about how things are. In “Parental, or I Don’t Actually Know German,” is the plain claim, “My need for love / is a need for guidance. For the world / to split and customize.” These verbs evoke a cluster of images: mitosis, the nuclear family. The decisiveness of this moment is tempered by the poem’s ending: “But I might leave in the night, / in condition of my search.” But the poem challenges us to read this decisiveness and uncertainty as part of the same condition. The slipperiness of “what it is / to represent / a representation” renders an existential state that is sharp and vague at the same time, fascinating, alienating, and thrilling. Though Lambright’s poems are more abstract than Anne Boyer’s, they remind me of that poet’s philosophical deftness and insistent materiality.

Come by, this wind. Tangential steps, light tick
and old pain. The sorrow in the tarot cards

The first words sound like an offer, a command, but the person (or wind) to whom it’s directed disappears, and there are traces or markers: steps, tick, old pain. Place-holders that have become their own things, like the napkins that hold the tarot cards. And the atmosphere itself is a place-holder for the rain that is coming. Nervousness is a sort of place-holder. So then you go back to the beginning of the poem, and it feels strong and natural to tell something or someone absent to come by.

And my favorite lines of the volume, “Like everyone I spent the first half / of my life in bed with the overlord,” from “Patagonia,” urge the reader toward a chilling consideration of what it means to be free, a person, a person with freedom. These lines would be wonderful without “Like everyone,” but with these words, they’re even more stunning. Is this time in bed with the overlord an experience of confinement or liberation? What is lost and gained when we get out of bed with the overlord? Like many poems in the volume, this one employs images and colors impressionistically, moving the reader deftly from word to feeling: “My face is modern. / I’m trying to say everything in the mint / wash of my modern face.”

“Aim” begins, “You’re doing the blue things in far / fields,” and lands on “a black-haired girl screaming / love you so much into the / remarkable spaces of your jacket.” The disappointment in this poem is really very beautiful; it ends:

Today the moon wore yellow and wrote an ode,
it was full of laziness. It was the type of ode
you say without conviction,
as if you’d earned a black flower.

The ambiguity of the moon’s laziness — is it funny or deeply sad? — animates the poem alongside the poem’s shifting palette: blue, black, yellow, black. And the colors and images of “To Stay” suggest psychedelic possibility but also immobility and perhaps injury:

My dove friend Amy dreams me up. Winds me up
in her static yellow house. The year we bend
into a field of glow-in-the-dark tulips, scope

a creek cardinal, heroin spoon, man
asleep on plastic and dumb falls forward. I’m learning
to hold the world in the back of my mind.

We might read holding the world in the back of our minds as a way of negotiating between what is promising and what can hurt us. The poems in this volume perform this mediation without sacrificing the potency and immediacy of both the physical world and the realm of structures and concepts. It is a joy to be in the atmosphere of these poems, which boldly reconfigure the field of relations comprising the mind, other people, the world.

Kathleen Reeves‘s book and music reviews have appeared on Bookslut and NYMag.com. She is a Ph.D. student at the University of Washington.