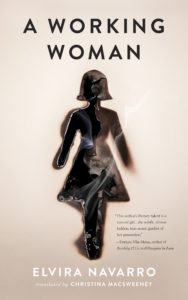 I think of my own failure. Having requested to review the book almost a year ago, snatching the space for myself. Ferocious. I will be the one to review the new Two Lines book with this awesome copy on its back: It begins as Elena transcribes the ravings of her roommate Susana, acting as part therapist, part confessor while Susana reveals the unbelievable account of her gay dwarf boyfriend and the bizarre sexual practices that have brought her almost universal revulsion. But is Susana telling the truth?

But my ferocity, or things, depleted me, I never wrote. A year passes. Of course I read the book immediately, it’s scintillating, and short. It is just my kind of thing, and at the bookstore when people were looking for a new book to buy, I would lead them right to it. “Read the back,” I said and if they were a zesty reader, or a working woman, they definitely came right up to the counter to buy it immediately.

I directed them, also, to the first page, where this new roommate Susana begins her unbelievable account: “I’d focused all my desire on finding someone to suck my pussy while I was having my period, and the moon was full.” Why is that sentence, the nicest eclipse of all worthy entities, confidently twisted together, virulently, so funny? I sold this book at the store a lot because of such a sentence, but I didn’t write the review, though I said that I would . . .

A Working Woman, a year passes and I flood with guilt. In my kitchen. Has it been reviewed? In the book, the narrator Elena has written a book, and then what? She works, but her job can’t catch on. A proofreading position where she is infinitely replaceable. She is like a scab at the company, or at least there are infinite scabs at her back, so she must take in a roommate. A roommate would be a constant against the tumult of loose, leaking work. And she has a psychotic break.

You write a book, but then? A book doesn’t end, or begin, anything. A book is the deflating balloon-tomb of a time. A wooden boat is the book you pushed off. A decade, or even months or instants, will rot the wood after it’s off your hands. The sea will eat such a sandwich.

A Working Woman, Navarro’s third, is like an impression of the hemmorhaging on the other side of having written your first. The book opens with Elena, who has published her first novel and now lives as a precarious proofreader on the edge of a psychotic break. As the book opens, she is listening to the wild sexual tale that Susana, her new roommate, tells her at length. But it’s not much of a character study. There is nothing particularly illuminating about Susana, or the tale she tells does not illuminate her character. But it is specifically an unboring story. It’s like a writer waking herself up after a slump, or at least a little nap, with a bit of bizarreness, some strange sexual coffee. Susana’s story was weird enough to keep me awake, but sometimes tiredness would get the better of me. The novel is like that, trying to wake up — or keep up — the writer-narrator, who is depressed, and the reader-writer, who was also depressed. And then 2017 happens. No wonder I didn’t do anything.

Susana tries to wake up Elena, out of her more-than-depression, with the concrete specter, her first book. “One evening she came in and put my book on the bedside table. She’d borrowed it from the library.”

“I thought seeing what you’d done would give you strength,” she said in apology, as if she were a self-help manual.

“I’m grateful for the thought, but the truth is it upsets me,” I lied.

What was bothering me was Susana observing my reaction to jeopardy. Now, every physical object, including the book, was shrouded in an aura of existing in another dimension. And if I opened the novel and read a couple of pages? What kind of nonsense would those words form?

The jeopardy is Elena’s break: “Irritating light, bustling crowds, harsh sounds. Mummies. My head swimming as Germán hugged me, and his warm skin softening the breakdown.”

I understand Susana’s impulse. That it’s the work (the book) we’ve mustered in our life that could maybe matter, carry us through even a horrifying dissociative passage in life. I used to think that about my book, that I’d always have it, having had had it. But things jerk in a different way. Experience starts to come for you differently. It even makes you sick, and it doesn’t remember your first book. You sent it to it, but it never read it. Typical.

A Working Woman is like that, jerking in a different way. After it drinks some coffee with a strange enough, a sexual enough story, Elena starts to walk around Madrid — “the simple jolt of suddenly coming across a house with a small palm tree opposite a flight of steps winding from one level of ground to another.” The jolt of the sexy morning of the book — a gay dwarf, sucking bleeding pussy con moon — jerks out to a different afternoon, the jolt of seeing some steps. Being alive and calming yourself down and seeing some things — a walk is boinging with flora and passages.

A Working Woman hides in its pockets an incredibly tender underplot and in the last two pages, Navarro actually empties her pockets for you. It’s actually grand, the revealed sweetness (things that were marginalized that had secret weight, and secret velvet) of the book. The trick of stones — these realities — at the end.

In A Working Woman, depression, and disassociation, sit close to flat and frank (funny, too) perception.

A date with a university professor: he’d started explaining his projects, taking it for granted I’d be interested in his stories as long as they were exhaustive.

Psychiatric intervention: In spite of the fact that the chemicals were beginning to take effect, making me calmer, quieter, I was experiencing a strong fear of conflict, of taking the lid off a pan and finding myself faced with a frog.

Not writing: It passed through my mind to relate my problem with writing, but what really occurred to me had nothing to do with that, but with myself. Writing was one more scenario in my fear.

A review must mostly just be a curved letter to the author. To Navarro I’d write, I wish I’d reviewed your book more immediately, but I have been depressed. This review is made of scraps, of flings I can fling out of that. Your third book is about failure, a trembling weakness (instability, precariousness, and being miserable, underpaid, and bored) that generates new situations and energies, sometimes, and it was written on some cool back steps. All women’s books are written on the back stairs, in my opinion. I didn’t write the review immediately but this book has been working in me all year. It must be why I’ve been naming things (even a character in my second book) Susana. A Working Woman must have stung me with a name. Character development as a sting. A book as a cup of sexual coffee that turns a third way down into a pond and an avenue.