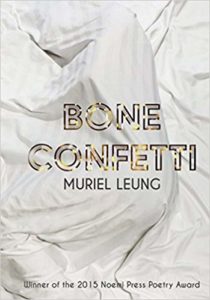 Ten pages into Bone Confetti and I start to understand it. Muriel Leung’s debut poetry collection, is a tale of two lovers separated by death, dealing with their longing to be reunited and all the surprisingly mundane things that come with grief . Bone Confetti is morose and otherworldly, which makes the already heady genre that much harder to comprehend, but I believe Leung is making a statement. So much poetry from writers of color is rooted in an immediate sense of identity and place; Leung is beyond that. She wants to talk about ghosts and the afterworld, and uses a Greek romance to set up the story. Occasionally she’ll drop a line about the world or war to ground the reader in the tale of Orpheus and Eurydice, those whom this book is based on.

Interestingly enough, I revisited this book around the same time that the death toll in Puerto Rico was revealed to be much higher than originally reported. Some believe mass suicides are to blame. The same unusually cold start of June claimed the lives of fashion icon Kate Spade and food anthropologist Anthony Bourdain by suicide. As social media spirals into a series of posts about suicide hotlines and “checking on your strong friend,” I find in Bone Confetti an unlikely comfort.

Leung makes death seem as dreamy, thick, and alluring  as the crumpled comforter on the book’s cover. In the aptly titled poem “Evacuation”, Leung writes: “No you don’t live here anymore. This house/ is a ship that has parted. When you wake up/ from a thousand year slumber, the world will be/ a less content version of its current self.” It’s comforting to think that death is but a long slumber that one wakes up from when you’re well-rested, and maybe a less content version of the world will be one that’s finally ready and willing to change. And when you think about it in that way, it makes one understand how a person might consider to bring death more quickly to oneself. Is it any wonder that suicide rates are skyrocketing? In the past, a common reaction to suicide was always confusion, as if people couldn’t fathom what would make a person decide when they want to die. But Bone Confetti creates an entire existence out of the idea that death is just a place, a mundane city even; nothing to be feared, just something to be accepted.

The book is split into four parts and takes place in Absentia-Land. Here, we witness a romance, a wedding, a funeral, and an epilogue. Leung uses a light tone to tackle the darkness of life among the dead, but there is a lot of musing on the past; her ghosts are still people with regrets, and death has not necessarily made anyone wiser. If anything, it seems that death has made her unnamed protagonists “confetti for someone else’s fodder.” “Dead Things,” a poem about—you guessed it—things that have died, is satirical and soothing. The poet uses the word “dead” 14 times in an 11-line poem listing the sky and history as things that are no longer living. Leung manages to put the reader at ease with one of the scariest facets of our reality by simply listing all of the other things that we enjoy that could be technically considered dead.

Leung normalizes death through her poems, and this is what makes Bone Confetti something to be shared with others in times of grief. This book gives the reader space to contemplate and make friends with the only guaranteed experience in this life. We see this clearly in the poem “Promenade in a City of Ghosts”: “Each night, I return to you with a pocket of jasmine. / We walk side by side, more ghosts than ghosts. / We pause for red: a siren, poinsettia, bodega light./After death, you appreciate these brief pleasures. / I am swollen with sound, humming.” Leung doesn’t beat you over the head with death; she simply places it at the foot of your bed like a proud cat. And this soft gesture feels like a hand on the small of your back, as you walk through the valley of the shadow of death.

Nia Hampton is a writer, artist and West Baltimore Native. Follow her on all social media @_NIAnderthal.