The Rise of the Beautiful Eccentric 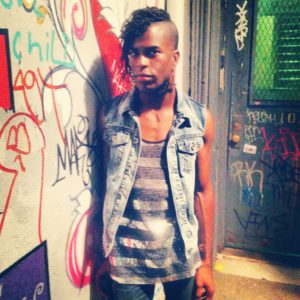 The following is adapted from FABULOUS: The Rise of the Beautiful Eccentric, copyright © 2018 by madison moore. Reprinted by permission of Yale University Press. Available now from booksellers everywhere.

Every book has a jumping-off point, a theoretical idea, a text or an artwork that sparks the imagination and gets the ideas up and moving. For me, that point was embodied in the turn-of-the-twentieth-century social economist Thorstein Veblen, a Yale-trained academic whose ideas I discovered as a Yale graduate student and who helped set my ideas about spectacle in motion. Actually, you could say two theorists shaped my ideas: Veblen and RuPaul. If you’ve heard the term conspicuous consumption or seen a person carry a designer handbag with the logo scrawled across the front in a giant font, you already know a lot about Veblen. He was best known for a book published in 1899 called The Theory of the Leisure Class in which he lays out his claims about the ways that conspicuousness, spectacle, and over-the-topness connect to power. The book was published less than two years after the opening of the sumptuous Waldorf Astoria Hotel in New York City. The Theory of the Leisure Class made such a splash that it inspired of-the-moment novelists like Edith Wharton, Theodore Dreiser, Henry James, and Marcel Proust to write fictional illustrations of Veblen’s teachings about the role of appearance. One critic described Veblen’s book as “an opportunity for American fiction,” a chance for writers to fictionalize Veblen’s economic theories. His ability to see beyond the dazzling surface of things shows how he was able to offer up a theory of the leisure class, and it is telling that the boldest analysis of wealth and its patterns of consumption was written by a critic who was the child of immigrants and who grew up in a simple agrarian household where luxuries were not tolerated. As Veblen’s fictional mother Kari Bunde Veblen says in the economist Leonard Silk’s posthumous 1966 satirical play Veblen: A Play in Three Acts, “All those Yankee women are good for is to dress up.”

The narrative of The Theory of the Leisure Class goes like this: leisure is the only job of the wealthy class, as opposed to the working or middle classes, so all the leisure class has to do is appear, exist. That’s their only task. Of course, this is all wrapped up into a spirit of capitalism that rewards those who are able to seize the most, as if barbarians in a jungle. For Veblen, one of the defining features of the leisure class is the need to always look really rich, where looking that rich highlights a competitive ability to get more and better and bigger things than anybody else. Under capitalism man hunts but he also requires physical evidence of his conquests, evidence that takes the form of “trophies”–stuff–that show off his prowess. He beats his chest and yells in triumph, and as he screams and yells, gold coins pour out of his mouth.

Veblen’s theory of the leisure class is an alluring one because it is all about appearance. Clothes are the most visual artifacts available to convey messages about social standing. A high-society portrait like John Singer Sargent’s Mrs. Hugh Hammersley (1892) gets straight to the point: a well-heeled woman of means luxuriates in a reddish-pink couture gown with ruffles around her neck. She crosses her legs, pointy gold shoes on. The rug is opulent, as is the chaise she gracefully leans on. There is an abundance of abundance in this image: an abundance of gold cloth behind her, framing her portrait, and the dress itself is so voluminous that the whole thing couldn’t even be captured within the frame of the painting. No finger is lifted–not even one–and here the painting tells us, in unmistakable terms, that Mrs. Hugh Hammersley doesn’t work. She is not only posing for the painter; she has the leisure to do so. Here’s what Veblen would have said to Mrs. Hammersley if he had stormed into the room during her portrait sitting: “Our dress . . . should not only be expensive, but it should also make plain to all observers that the wearer is not engaged in any kind of productive labor.” Or, put plainly, Mrs. Hammersley is a show-off, bragging about her pocketbook and her luxury.

Fancy clothes are restrictive, binding, and otherwise totally ridiculous for everyday tasks. We can look at this painting of Mrs. Hammersley, which is ultimately a trophy, and feel certain that she is not about to mow the lawn in that dress. It’s the clothes that drive home the message. Indeed, Veblen was always interested in the binding powers of clothing and once taught a seminar at the University of Chicago on the history of high heels, arguing that they were intended to bind women as yet another trophy item for men while also demonstrating the man’s ability to pay. Think of the stunning photo-realistic paintings of the contemporary American artist Marilyn Minter, a work like Strut (2005), a blown-up image of a dirty, bruised, even bound foot struggling to walk in a glamorous, diamond-laced Christian Dior heel. For Veblen, the high heel is added evidence of enforced leisure, an object that places women under house arrest. It is “obviously unfit for work.” While such apparel may make women attractive and expensive-looking, the trade-off is that it incapacitates the wearer, making her conspicuously exempt from manual labor and turning her into an object in the process.

Veblen focused on how fashion is used to communicate power by showing off, but what he missed is that when you are forced to the margins, drawing attention to yourself is an act of self-love. Veblen wrote about wealthy people who already have power, and that’s fair enough. But using the effervescence of creative agency, style, and fabulousness allows marginalized people to empower themselves as a triple act of defiance, confidence, and self-love. For the fabulous, those beautiful eccentrics, a group of rogue creative individuals linked together by sensational style, the body is the canvas for creative expression, but it’s never just style for style’s sake. Eccentrics see norms but then use their bodies and aesthetics to displace and expose them.

Fabulous is a form of currency, there’s no doubt about it. The catch is that a sickening outfit doesn’t pay the rent. You can’t give your landlord twenty thousand Instagram likes instead of the rent–cash money, honey! This kind of currency falls into what Elizabeth Currid-Halkett has called “the Warhol economy,” an economic world of creativity where being at the right party or fashion show at the right time is just what you need to advance in the creative industries. In our social media era, the more followers you have and the bigger the splash you can make online, the more chance you have to turn those followers’ admiration into paid opportunities. More likes means more attention, which then can often be translated into other forms of cultural and economic capital. If we can figure out how to get the attention of consumers and other passersby long enough to make them interested in a specific product, idea, or experience, then knowing how to get attention becomes an important type of currency.

That’s why fabulousness is a kind of “symbolic capital,” a term the philosopher Pierre Bourdieu used to describe any alternative, nonmonetary form of capital that pops up and assumes value in a social group. Symbolic capital works in all kinds of subcultural groups. Think of the secret gay hankie codes of the 1970s, whereby handkerchiefs of a certain color placed in a specific pocket indicated interest in a specific kind of sex–but only to those in the know. For Bourdieu, the sex appeal of symbolic capital lies in its world-making power and its ability to create alternative universes and systems of value. The thing about these kinds of alternate universes is that the real world and the alternative universe both exist at the same time.