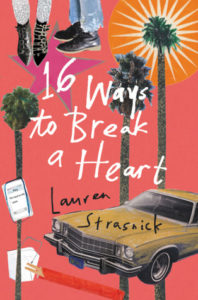 About a year ago, after a breakup, I began writing a novel based loosely on my own short relationship. To me, relationships are the most interesting thing. They are intoxicating and change the way we see the world. I also believe they’re inherently infused with a great deal of projection. As a character on the TV show Bored to Death once put it:

Nobody’s really loved for themselves. Are they? I mean, all love is projection. Think about it, I’m in your movie and you’re in mine, two different films really. We don’t really know each other; we just make a guess at knowing each other, right? I think the same is true about love.

I think about this quote often. It’s cynical but feels true. We can never get in someone else’s head, we are always trapped inside our own perception.

Lauren Strasnick’s fourth novel, 16 Ways to Break a Heart, in which we are told each character’s account of a short-lived but tumultuous high school relationship, is a ripe exploration of this theme. We first meet Nat via a post-breakup letter she writes to Dan, her (former) “Public School Boyfriend.” The story is told through Nat’s post-breakup letters to Dan, Dan’s responses to them in real-time, and various text messages, G-chats, and emails. The structure highlights the mismatch in their perception: Natalie believes her letters are seductive, while Dan believes they are hysterical displays of someone who might be bipolar.

The complexity of Strasnick’s characters results from this dissonance between how they perceive and how they are perceived. Nat, a fiery artistic prodigy, belongs to the privileged Hollywood elite, while Dan, an aspiring documentarian, is the son of a tax attorney. While sparked by witty banter and shared passions, their relationship is also filled with jealousy and envy. Dan is envious of Nat’s talent and connections (Dan is solidly middle-class, yet around Natalie, acts as though he grew up in a trailer park), while Nat is jealous of Dan’s frequent dalliances. Both characters are majorly flawed – Dan is feeble, a flirt and, ultimately, a cheater, while Nat is melodramatic and bitchy – but Strasnick also makes them sympathetic. We like Dan by learning about the tragic loss of his mother, as well as experiencing his immense guilt and self-hatred along with him. Nat is sympathetic because she’s a well of intense, but very honest, passion. The relationship is messy but believable (Strasnick said at her book launch that she was inspired to write an “anti-love” story), and culminates in a poignant act of revenge.

If Strasnick’s novel explores the necessarily narcissistic tangles of love, then LA might be said to be one of its primary love objects. The novel is replete with obscure film and art references that delighted me as a culture-obsessed Los Angeleno. To the extent that LA is a character, the novel recalls the work of Dana Spiotta, whose 2016 novel Innocents and Others also explores precocious artistic teens coming of age in the City of Angels. Both Strasnick and Spiotta capture the strange allure of this bizarre dream-land, a place where people have no idea what’s happening in Syria but have the Criterion Collection memorized by heart. This is what LA whispers to its lovers — let passion be your only guide.

In the end, 16 Ways to Break A Heart reads as a blustery fever dream. In this sense, Strasnick captures how reading and relationships are similar. In both, we’re inclined to filter the world through a lens of personal desire. One might say the goal in both is to banish our projections in order to see the world more clearly, but Strasnick shows us that we can’t avoid projecting ourselves into the world.

Anna Dorn is a writer and attorney living in Los Angeles.