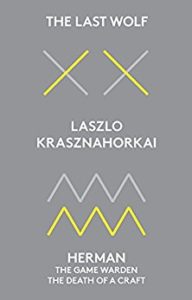 For years, László Krasznahorkai has been cited as a contender for the Nobel Prize in Literature, increasingly so since he won the Man Booker International Prize in 2015. Nonetheless, the Hungarian author’s publishing history in the US and UK is likely to preclude an award from the Swedish Academy. He can’t win the Nobel, the logic goes, because too many in the English-speaking world have already read him. But have they? More may have encountered Krasznahorkai’s film collaborations with Béla Tarr, who directed four films based on the author’s works, and who co-wrote two additional scripts with the author.

László Krasznahorkai is hardly a household name, yet his works have appeared in English since 1998, when New Directions published The Melancholy of Resistance, followed by the novels War and War, Satantango (Krasznahorkai’s first novel, though it appeared in translation in 2012), and Seiobo There Below, a novel whose chapters (or stories) are numbered after a Fibonacci sequence: 1, 2, 3, 5, 8, 13, 21, 34, 55, 89, 144, 233, 377, 610, 987, 1597, 2584. Just as each number in a sequence of this kind is the sum of the two preceding numbers, the interlocking stories that make up the novel rely on a similar accumulation.

Krasznahorkai’s other books include the collections AnimalInside and The World Goes On (both New Directions, the latter forthcoming), Destruction and Sorrow beneath the Heavens: Reportage (Seagull Books), a work listed as a novel on the author’s website and as a kind of travel memoir on the jacket, and The Manhattan Project (Sylph Editions), a work interspersed with photographs by Ornan Rotem that emerged while the author was working on a Melville-inspired novella as a fellow of the New York Public Library (Krasznahorkai used the fellowship to research not just Melville, but Malcolm Lowry’s searches for Melville, as detailed in Lunar Caustic). When asked to describe his work to the uninitiated, Krasznahorkai states: “Letters; then from letters, words; then from these words, some short sentences; then more sentences that are longer, and in the main very long sentences, for the duration of 35 years. Beauty in language. Fun in hell.” The author’s obsessions (among many) include form, layering, and translation, and his latest work from New Directions, The Last Wolf & Herman, is no exception.

Like other books by László Krasznahorkai, The Last Wolf & Herman is easy to read and difficult to talk about. Perhaps “easy to read” isn’t quite right, but rather “difficult to stop reading.” This difficulty stems, in the case of The Last Wolf, from the piece’s construction as one sentence that runs for 70 pages — there are no logical stopping places. The work’s other half, Herman, is itself divided into two “versions” titled “The Game Warden” and “The Death of a Craft.” New Directions refers to this book as containing “two short masterworks,” and I wouldn’t quibble with the term “masterwork” but with how many there are. Given no background information, I would’ve said the latest by Krasznahorkai was either three interlocking fiction pieces or an oddly structured short novel.

The book — beautiful, clothbound — is assembled in a way that draws attention to this interlocking: the halves are joined in a flipped configuration or tête-bêche, so that after finishing one half, one is faced with the upside down ending of the other. Oddly enough, the work’s midpoint is also its endpoint. Rather than a cyclical closed loop, The Last Wolf & Herman form a three-pronged circuit of texts, the reading of which generates centripetal force, toward whatever is or isn’t at the work’s center.

Though Herman was originally published in 1986, and The Last Wolf in 2009, their arrangement together achieves an undeniable synergy. Not only does the completion of either half generate a desire or need to flip the book and read or reread its counterpart, but each half comments on the other, adding another layer to what you’ve read or are about to read. On a thematic level, The Last Wolf is about the search for the animal you might expect, while Herman and its two “versions” are about a trapper entrusted with ridding a forest of “noxious predators.” Both the narrator of The Last Wolf, who recounts his story to a Hungarian barman in Berlin, and the eponymous Herman have been selected in some fateful manner — the former by a foundation, who hires the narrator to write about the supposed last wolf of Extremadura, Spain, and the latter by “wildlife management experts.” Each half complicates its own story in intriguing ways.

It’s immediately apparent why comparisons of Krasznahorkai to Samuel Beckett and Thomas Bernhard abound. If Bernhard was, however reductive the term, the Alpen-Beckett (Beckett of the Alps), then László Krasznahorkai might in turn be called the Alföld-Bernhard, the Bernhard of the Great Hungarian Plain. Features of Krasznahorkai’s writing that invite these comparisons: voice-driven, unrelenting sentences that continue for pages, and entire chapters (even entire works) lacking paragraph breaks. In a similar vein, Krasznahorkai attempts to undercut language as a vehicle for meaning, as when the narrator of The Last Wolf muses “that language itself was wholly corrupt,” that “the language at his disposal was no longer capable of giving form to subjects that could not be fixed because it had gone full circle,” a language “as befouled as dirty laundry.”

The Last Wolf, in the end, concerns its purported subject just as much as it concerns the last word, both ultimate and final (however impossible or insufficient such a word might be). By the same token, when Herman is described as “a fanatical professional obsessed by his craft,” one cannot help but think of the author himself. In an interview with Richard Lea in the Guardian, Krasznahorkai states that “this characteristic, very classical, short sentence – at the end with a dot – this is artificial, this is only a custom, this is perhaps helpful for the reader, but for only one reason, that the readers in the last few thousand years have learned that a short sentence is easier to understand.” The style of Krasznahorkai’s latest work, The Last Wolf & Herman, is at times both natural and difficult to understand, though readers of a certain stripe will experience intense pleasure in the attempt.

Brooks Sterritt’s writing has appeared in Subtropics, The New Republic, and the San Francisco Chronicle, among other venues.