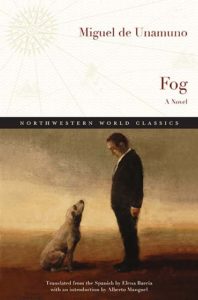 The Prologue to Fog (1914) — Miguel de Unamuno’s widely influential, existential novel on the inadequacies of realism, which I’m reading in a new translation by Elena Barcia from Northwestern University Press — is by a writer named Victor Goti who, besides claiming distant kinship to Unamuno, is both a character in the novel and a close friend of Augusto Perez, the protagonist of Fog. Goti (after making suitably unctuous sounds about being permitted to write the prologue for a work by a famous author) disagrees vehemently with the author’s account of the events narrated in the novel, events to which (as we discover later) he was intimately privy. This is an obvious ploy to anticipate, and perhaps thwart, criticism of the novel; later, in a “postprologue,” Unamuno threatens to finish off Goti for questioning the decisions he had made in Fog. Unamuno famously plumbed the genre of the novel to air his philosophical and historical misgivings about fiction. What realistic fiction tries so hard to achieve — an aura of credibility — seems like the very thing that Unamuno works to dismantle. Further, Unamuno, who considered Don Quixote to be more real than Cervantes, does not care to erect any walls between the real world and the fictional: he — as himself, the writer and philosopher — makes an appearance in Fog.

Covering a few traumatic months of its hero’s life, Fog is about the romantic and sensual awakening of Augusto Perez. Augusto’s father died when he was an infant; he was raised so dotingly by his widowed mother that her deathbed lament had been: “my son, I’m afraid of what might happen the first time you find a thorn in life’s path.” She has left Augusto wealthy and in the care of two trusted servants so that the exigencies of making a living, or of taking care of himself, can give his life no direction. Nor do the narrative’s details reveal responsibility to any social or cultural tradition. It makes for a character who seems disengaged and rootless and who, very much like Dostoyevsky’s Raskolnikov, or Camus’ Meursault, perceives life as a fog: fertile terrain on which to conduct existential experiments.

“A father,” said Jean Paul Sartre, who lost his father in infancy, “would have inhabited me [by] making his moods my principles, his quirks my law, his ignorance my knowledge, his disappointments my pride.” Fatherlessness, Sartre admitted, had deprived him of a superego. Orphanhood, coupled with an aloof vocation-free intellectual temperament, has left Augusto similarly disoriented. He is immensely bored and given to lengthy soliloquies. Augusto’s level of engagement with life is so low, it’s diseased. His plight is not rational. His affliction is existential. Only the strongest of passions can jolt him from such depths of apathy: in this case, love. The deeper the slumber, the more dramatic the awakening; for Augusto, love “both dissolves and condenses the fog of existence. Amo, ergo sum!” The object of his affections, a young woman named Eugenia, is a beauty Augusto passes on the street.

Love — always too strong a potion for the emotionally derelict — in Augusto mushrooms into an all-encompassing obsession that will neither admit rejection nor guard against the wiles that Eugenia demurely deploys. She, in collusion with a secret lover, leads Augusto through an emotional and intellectual maze and bilks him for as much money as she needs before eloping on the eve of their wedding day. The humiliation is crushing and Augusto is inconsolable. He considers suicide. In these final sections, Unamuno sets the novelist’s cap aside and, donning the philosopher’s headgear, enters the novel.

Unamuno called Fog not a novela, but a nivola — replacing the all knowing and all seeing ‘o’ with the private and secretive ‘i’ — because he believed, with Hegel, that only the ‘I’ was really knowable, and the clear presentation of it was in fact the novelist’s raison d’être. It was not so much an exalted view of the novelist’s purpose as much as a reaction to the slab-sized realistic novels of the previous century (think Dickens, Tolstoy, James) which Unamuno likened to a kind of deception where (he lamented elsewhere) characters “are puppets dressed up in costumes and moving about as their strings are pulled, and with phonographs wound up somewhere in their insides to repeat remarks which their puppet-master has picked up on the sidewalks or in cafes, and jotted down in a note-book.” On the other hand, the nivola (as observed by critics over the past century) is almost totally free of descriptions of time and place and analysis of characters: it is free of commentary and allows itself to be carried by dialog alone. In these final sections of Fog, the dialog reads like an anguished Socratic elenchus, a tone befitting Augusto’s tragic end.

Augusto, intellectually curious in spite of his misfortunes, travels to meet the famous philosopher who is known as an expert of sorts on the topic of suicide. In this most famous scene from Unamuno’s fiction, he adjudicates over the fate of his protagonist, probing some of the themes that had dominated his philosophy: the human quest for immortality, the lives of fictional characters and their authors, the nature of consciousness. It is the most cogent reflection in fiction of the essence of Unamuno’s main philosophical work— A Tragic Sense of Life in Men and Nations — where he argues that modern godless life is essentially tragic because it condemns the existence of each human to a hopeless search for meaning in an unruly world.

Augusto’s fate is sealed. His only consolation could be an epitaph for Unamuno’s contribution to world literature: when we die, we all become fictional characters.

Few novels in modern literature have dared bare their philosophical investigations so brazenly. But in doing so Fog reminds us that the questions that haunted Unamuno more than a century past still dominate our discourse, our literature and our philosophy. The quest in Fog is ontological. What is the nature of love? “Is there more to being in love than thinking that you are?” And why does it seem that “only jealousy reveals our love to us?” “If there were only one man and one woman in the world . . . they would never fall in love with each other.” The quest is epistemological. What is the truth? “Truth is what everybody believes, and in believing the same thing, we understand one another . . . [i.e.] Truth is a social construct [and] Any social construct is a lie.” Besides crude entertainment, what is the significance of fiction writing? As Unamuno’s lifelong preoccupation, the quest is also existential. How, and to what end, do we continue to fabricate purpose, passion, morals and ethics after the death of God: that purpose of all purpose, so recently deceased?

Conventional fiction seals its cracks and fissures with an airy, knowing confidence readers may question only at the peril of total disbelief. Fog conceals nothing; it exposes its entrails for the reader to examine. Augusto’s death conveys Unamuno’s conviction that in reality there is no recovering from grave failure in an ambition that achieves existential importance. Any purpose that rises to the level of religious fervor, that becomes a substitute for God, is doomed to end in tragedy. Readers schooled in Eastern traditions may see in Augusto’s vainglorious rapture elements of Maya, illusion. Heroic tales of courage and recovery, Unamuno seems to suggest, are only stand ins for reality: a pretense of knowledge by an undiscerning story-teller who has either been taken in by his subject’s reassurances or who lacks the wherewithal to pursue him into the depths of despair. Augusto’s death is not literal, but rather existential. It is his return to the fog — a non-living that had been his existence before that fateful day when he set eyes on Eugenia and which, after having experienced life in its emotional fullness, he now perceives as a kind death.

Unamuno’s influence spans the twentieth century: writers from Heidegger to Borges have declared their debt to him. Radical trends, and radical thinkers, continue to draw sustenance from this great disruptor of world literature who stood between two epochs. On one side of him was the glib and chunky realist novel, on the other was postmodern liberation, in the cause of which Fog was a crucial opening salvo. Readers, and writers, must read Fog to discover how Unamuno helped cement this reality (to quote Gottfried Benn): “there is no reality, only, at most, its distorted image.”

Mukund Belliappa lives in Capitol Hill in Washington DC and does much of his reading and writing in the Library of Congress.