The Kingdom of the Young – Edie Meidav 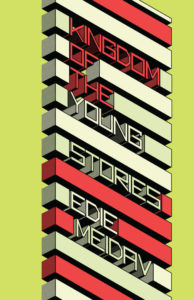 Whatever judgment might be made about the merits of particular stories in Edie Meidav’s collection Kingdom of the Young, a judgment about the book as a whole has to begin in the observation that it does not serve very well as an introduction to Meidav’s work as represented by her preceding three novels, The Far Field (2001), Crawl Space (2005), and Lola, California (2011). Those novels are intricately constructed, expansive works that immerse the reader in their episodic details and unhurried, sauntering prose. Kingdom of the Young is not only a much slimmer volume, which of course is not unusual for story collections that assemble a writer’s ongoing work, but in effect the stories seem conceptually thinner as well, more concerned with tone and atmospheric effect — although this simply may represent a novelist’s attempt to adjust to the differing demands of the short story.

But if the stories in Kingdom of the Young are working in a different mode than Meidav’s novels, the most conspicuous manifestation of this difference can be felt in the absence in many of the stories (not all) of the sort of vivid detail offered in the novels. These details are not necessarily conveyed by flourishes of description, but are built up through a layering effect created via shifts in time and perspective, used by Meidav as the structural foundation of the novels. Thus many of the stories seem abstract and quasi-allegorical where the novels are concrete and immediate. Crawl Space could be described as an account of evil in the world, but its story of an elderly Frenchman accused of war crimes during the Nazi era creates moral ambiguity in its comprehensive first-person narrative of its protagonist’s controversial life. The story “I Never Had Any Problems with You” might also be called a story about the presence of evil, but its highly compressed form — a letter of sorts from a father to a daughter — acts more as a mystery story in which the reader must read between the lines for the apparent truth the father has devoted himself to hiding than an inquiry into the commission of evil itself. The daughter does not fully emerge from the story as a character at all, merely the means to ultimately revealing the father’s complicity in the terrible acts carried out by the government for which he serves as a functionary.

Similarly, Meidav’s most recent novel, Lola, California, could be read as a meditation on male hubris and its effects on those closest to the novel’s central male figure, although this reading would unnecessarily restrict the full scope of the novel’s concerns, explicit and implicit. In Kingdom of the Young, “The Golden Rule, or I Am Only Trying to do the Right Thing” could as well be taken as almost a kind of parable about the sovereignty of male prerogatives. The novel and the story even share the underlying structural trope evoking the male figure in his final decrepitude, awaiting death, a device through which the rest of the character’s life and its influence are related, but again what emerges from the portrayal of Vic Mahler in the novel is its complexity, a complexity that in turn conditions the experiences of all of the other characters in the novel, through the depth of their response to Vic Mahler’s overwhelming presence in their lives. The principal male character in “The Golden Rule” (referred to by the nurses taking care of him as “the Groper”) too exerts unavoidable influence on the women around him, especially his wife. Even more than the narrator of “I Never Had a Problem With You,” the Groper is — as a character — mostly a cipher, emptied by his infirmity of all personality except that which is summed up by his new moniker and important to the story for the emblematic role he plays as a husband who disappoints.

Of course, it is an entirely sound strategy to approach the short story in a way that most effectively exploits its differing formal possibilities. Short stories cannot create the complexity of character or achieve the kind of narrative amplitude possible in the novel, so attempting to achieve tonal consistency or emphasize stylistic invention (in general, to cultivate more “poetic” effects) are certainly worthy and legitimate ambitions. However, while Meidav is by no means a minimalist or “plain” stylist, her prose often features lengthy, relatively complex sentences, and doesn’t really work through obvious poetic devices but rather through accretion: they accumulate largely expository clauses and phrases, as if the sentences, separately and sequentially, are endeavoring to pack themselves full of as much annotative information as possible:

Nothing is not useful. They drive poorly to a eucalyptus clearing where they lie on their backs wearing cardboard-tipped swimsuits, letting rain drum the flat of their bellies, their viewers not just each other but the imaginary, slightly shocked audience they always tote around to cheer them on. They have come to this clearing as if rain-spattered beatnik exhilaration had been their mission back at alpha, drugged without drugs, beatitude theirs to find even if their own chivalric code means that the next day they can never talk about the previous day’s hijinks.

Although Meidav’s writing is lucid and subtly evocative (“drugged without drugs”), it really makes no effort to be “lyrical” or “rhapsodic.” Neither is it purely functional: Meidav’s language does not artlessly “disappear” into the narrative “flow” of plot, and requires the reader’s appreciative attention. But her periodic sentences and chains of subordinate clauses work best in creating the kind of densely textured work exemplified in The Far Field, Crawl Space, and Lola, California. In the more compressed space available in the short story, at least as represented by what she has attempted in Kingdom of the Young, Meidav’s prose style works less well, especially in stories that deliberately foreshorten depth of character and plot and thus necessarily emphasize effects of language, such as the title story, the book’s first, which takes the form of a single, multi-page paragraph of sparsely punctuated sentences that presumably is intended to reset the reader’s expectations toward a more formally unorthodox, verbally adventurous approach, an impression reinforced by the following story, “Romance; or, Blind in Granada.” In both cases, however, the predominant effect is not the kind of poetic dynamism such an approach requires as substitute for character development or “world-building,” but a sense of continuous exposition that struggles to maintain its narrative momentum.

Not all of the stories in Kingdom of the Young grapple unsuccessfully with the imperatives of the short story. Perhaps because it is narrated in the first person, giving the story the cogency added by voice, “The King of Bubbles” effectively exploits its reduced scale, relating an essentially plotless story (although with a surprise ending) in which the narrator observes his surroundings while sitting in a health club hot tub. “Dog’s Journey” is the most compelling of the several stories set in Cuba (or some other more generalized Latin American country with a troubled political history), largely as a result of the greater specificity of detail it provides. “The Christian Girl” likewise immerses us in the lives of an Eastern European Jewish family before the war, and it too could be said to have a surprise ending (although in retrospect not so surprising after all). These are rather disparate stories in subject and theme, however much Meidav has attempted to provide the book with some additional unity by grouping the stories under three broad headings (“Believers,” “Knaves,” and “Dreamers”). This miscellaneous quality is only reinforced by the inclusion (as a “Coda”) of two works of creative nonfiction. These essays considered separately are well done and interesting enough, but finally they seem a little too obviously an effort to augment an otherwise slender collection.

Kingdom of the Young ultimately confirms that Edie Meidav’s skills as a writer are indeed better suited to novels — long ones at that — rather than short fiction. At a time when short stories are probably less welcomed by mainstream publishers than ever — and they’ve never been all that welcome — certainly no writers should be discouraged from testing the potential of the form, especially if it allows them to experiment with previously unexplored techniques and strategies. But while novels like Crawl Space and Lola, California are not “experimental” in the sense by which that term has come to designate a specific mode of self-consciously unconventional fiction, nevertheless their essential realism is not of the sort that encourages distracted, superficial reading. Readers unacquainted with Meidav’s work might turn first to these more abundantly devised and engrossing books.