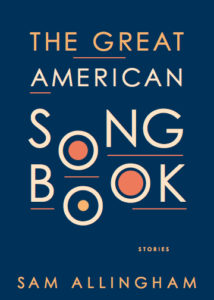 “It was the truths that made the people grotesques. The old man had quite an elaborate theory concerning the matter. It was his notion that the moment one of the people took one of the truths to himself, called it his truth, and tried to live his life by it, he became a grotesque and the truth he embraced became a falsehood.”

Songs often trade in abstractions. Love, You & Me, Longing, Happiness, Us, Home, The Road, etc. In the hands of a deft songwriter or a great singer, a song can illuminate some facet of any of these in such a way that they feel like they can belong to any of us. More often, though, these abstractions can be an oppressive influence in pop songs. In Sam Allingham’s The Great American Songbook, the great lyricist Lorenz Hart – one half of the titanic Rodgers & Hart hitmaking duo of the ‘20’s and ‘30s — sees Love as “a dumb bear he must force to dance.” As in the body of work from which Allingham’s linked short story collection takes its name, Great American Songbook is a meditation on these archetypes of the popular unconscious. If they are not the dancing bears, then they make dancing bears out of nearly everyone that tries to conquer them.

Allingham’s titular story, the last one in the book, bears an epigraph from Schopenhauer: “the effect of music is so very much more powerful and penetrating than is that of the other arts, for these speak only of shadows, but music of the essence.” The reality that Allingham understands is much trickier — oftentimes, songs revert to abstractions as shorthand for this essence. In reckoning with cultural conventions, idioms, and linguistic constraints, songs cut their subjects down to size to fit into their framework. Rather than speaking to the essential, songs – notably, those that make up the great American songbook — can have an essentializing effect. As they draw lines around the ineffable, it becomes more two-dimensional and less focused. And in shaping our life projects around these abstractions, sometimes we do too.

Like in Winesburg, Ohio, characters in Great American Songbook are cowed by their Truths, these abstractions they attempt to embody. Their Truths box out other elements of reality; whether Love is the Truth or something adjacent, as in “Tiny Cities Made of Ash,” and “Husbandry.” “Tiny Cities” concerns itself with the narrator, Eddie, and Trevor, a vaguely creepy loner obsessed with building a scale replica of his small town. Trevor devotes his entire life to working on his model, at the expense of friendships and life experiences before ending his own life and entrusting the model to Eddie after it’s finished. In “Husbandry,” the narrator Cheryl’s mother begins to adopt the mannerisms and habits of her dead husband. In her grief she dresses like him, starts to talk like him, eats what he eats, and like Trevor she ultimately ends her own life. Both Cheryl’s mother and Trevor are motivated by longing: Cheryl’s mother for her dead husband, and Trevor for a more perfect world. It’s a feeling that defies the rational, which adds to its power. And its power is great: each person is subsumed by their longing, and collapses under its weight.

Love is perhaps the most commonly debased idea in the tradition of American popular songs. To that end, there is an opaque, almost totemic quality of the love that runs throughout The Great American Songbook. Its monolithic nature leaves no room for the people it conquers, just as it does in plenty of songs. The love in “Love Goes to Buildings on Fire” works in this way: it simply exists, growing until it becomes too big for the people who bear it. Not once do we find out why the unnamed narrator fell in love with their Ramona; only that they were in love at one time, and then they weren’t. Their love tints the landscape, to the point that the narrator wonders at the love lives of each of the buildings surrounding him. Ultimately, it’s untenable; the couple separates, and our impressions of their breakup are as fragmented as our impressions of their relationship.

“One cannot let his job define his life,” Allingham deadpans in “Assassins,” the Barthelme-esque story of three unnamed assassins working in Philly. Herein lies a central problem in Great American Songbook: in devoting oneself to creating an aspirational world, it’s easy to lose sight of the real one. Once our creation subsumes our world, we become truly grotesque. It’s what plagues Trevor, and Cheryl’s mother, and to a different end, Richard Rodgers. Rodgers, the Gallant to Hart’s Goofus in Allingham’s rendering, defines love in strictly musical terms:

Young love, an upward leap from the tonic to the fifth […] unrequited love, a major chord melting into an unexpected minor tone like ringing in a glass; and contented love, the clean interval between the third and the fifth, sometimes rising to the major sixth and twinkling like a round, white star.

Rodgers constantly translates his world into music. The sound of his surroundings take on a musical quality, as does his own speech (musical in that his words are “light as air, spoken and then forgotten”). As elegant as it is, this distillation can become reductive very quickly.

While Rodgers says that “one note leads to another,” Hart’s version is that “one word hides another.” Though that stock-in-trade is a powerful tool for any songwriter – or any writer – Hart understands the way that this kind of sleight-of-hand can have a deleterious effect when it comes to speaking to something more universal. Perhaps this is why the beleaguered Hart never truly lived in his songs, or put as much stock into the power of music as Rodgers. His lyrics are very much of their time, but his troubles (which Allingham lists) were an inescapable part of his ken.

Rodgers’ world is rosy; he is the debonair, patrician craftsman who literally sings his own troubles away, always placed next to Hart the brilliant sod. Upon his death, though, “Rodgers never haunts anyone,” even as Hart’s ghost hovers forlornly listening to his friends play the piano. Hart is bound by reality in a way that Rodgers lives in his music, so Hart leaves more of a personal imprint on his world.

At the collection’s furious apotheosis, the legendary Artie Shaw harangues a (presumably) lesser clarinetist, declaring that “a song is a fucking coffin!” It’s perhaps the most self-aware admission by any character in Songbook, and the most grounding. Shaw, like Hart, poured a good deal of blood into his art, but he recognizes the losing errand in creating work that has a tenuous grasp upon the real. To make and inhabit this kind of creation is to create a gilded cage – it was enough to alienate Shaw from music, and to drive him into seclusion to get his bearings. Neither the character of Shaw nor Hart is a paradigm of happiness, but they at least lived more honestly. In life and death, they can claim their life as their own in a way that many of the other inhabitants of this collection can’t.

The way that songwriters mobilize abstractions is mercenary in nature: if you use them to cast a wide enough net, you’ll catch more listeners. That’s partially why the great American songbook is made up of a menagerie of grotesques, and why it’s an appropriate namesake for Allingham’s work. Allingham, like Sherwood Anderson, is keenly attuned to the idea that devotion to these abstractions is freeing, but it’s just a matter of trading one set of walls for another. This isn’t to say that songs can’t be powerful; I’ve staked my livelihood on the premise that music has power. Instead, what Allingham shows is that songs are most effective when their writers embrace the limitations their medium presents, and cannily exploit these to draw attention to their project’s artifice. This, in effect, points beyond the sound to something harder to grasp as we meditate on what we’re not hearing.

Matt Orenstein is a Los Angeles-based composer, songwriter, and bassist. Additional information can be found at mattorenstein.com.