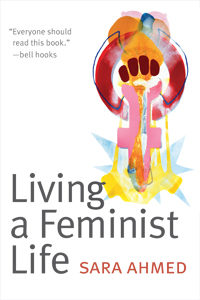 I will hold my tongue. I don’t want to say it. If I say it, I won’t stop, and it won’t help. I’ll drown you out — other women, my friends, your things — and I’ll drown out this book (so much about being a feminist, a lesbian, a woman of color in the humanities) as I down it, and it takes us to the bottom. A multiplicity of bottoms — a flood of assholes.

Tongue to hole, that paragraph goes. My tongue is jammed in a certain hole.

This book is about a wriggling out, a speaking out. And it teaches me to write, to think, like this — word twists word, and body to thought. Because for Ahmed, words make worlds and her book — the first after she left academia in feminist revolt — is full of bluesy world-play.

Audre Lorde writes that “[i]n order to survive the weather we had to become stone,” and so Ahmed says,

Hardness for Lorde is thus not the elimination of fragility; it is how we live with fragility. Sometimes we need a wall to protect ourselves. Sometimes we need to retreat when the world is intrusive. Sometimes we need to shatter that wall. A bruise can lead to a wall; a bruise can be a break. When a stone breaks, a stone becomes stones. A fragment: what breaks off is on the way to becoming something else. Feminism: on the way to becoming something else. Shattering: scattering. What is shattered so often is scattered, strewn all over the place. A history that is down, heavy, is also messy, strewn.

The fragments: an assembly. In pieces. Becoming army.

Much of this book — a feminist gift — is tutelary and dear (to be held close), in its affirmation of reading: how do I read my experience, how do I read what happened on the street, in that meeting, in the classroom, in the syllabus, in the book, on my reading list, in the hall, cornered by a lecture in the copy room again, at the dinner table, and on the phone? This reading-of-things Ahmed demonstrates in the way she takes up Lorde’s stone is one that’s way slowed down — what is theory but slowness? wait. stop. slow. no. You can go from word to word and find the words: a life.

Ahmed says, Read the furniture. In a section on doing diversity work in academic institutions, furniture “is always good to think with.”

Think of how it feels to be comfortable: say you are sinking into a comfortable chair. Comfort is about the fit between body and object: my comfortable chair might be awkward for you with your differently shaped body. . . Heteronormativity functions as a form of public comfort by allowing bodies to extend into spaces that have already taken their shape . . . the surfaces of social space are already impressed upon by the shape of such bodies (like a chair that acquires its shape by the repetition of some bodies inhabiting it: we can almost see the shape of bodies as impressions in the surface).

Women are desperate. Feminists are desperate. It’s like a joke. Desperate for some reading material, in institutions that are still functioning basically as white men’s studies (“Women’s studies as a project is not over until universities cease to be men’s studies”). Fuck, I guess I’ll read the chairs. Nothing on the syllabus . . . I’ll read the chairs in the lounge in the diversity office . . . and this book is very kind because it teaches you to read between the white men, even if it’s chairs. But Ahmed commits graffiti, vandalizes the property of the diversity office. Feminism is vandalism. She scratches queers, women, blacks, lesbians — Lorde, Virginia Woolf, Charlotte Perkins Gilman, Gill Valentine, Frantz Fanon, Sylvia Winter, Chandra Talpade Mohanty, M. Jacqui Alexander, Heidi Mirza — into the wood.

Something to read while you are waiting. For what? In Ahmed’s middle section, she describes her work in diversity offices, which has shittily taught her that attaining agreement on a new diversity measure “is one of the best ways of stopping [it] from happening.”

Feminist time, it can feel like time spent in waiting rooms. Waiting to be seen, to be shown in, shown something, for verdict. No wonder this book is written like the blues, full of rhyme — clasping, holding rhyme.

I’ve got you, it says (in bold). And it holds. And holds a space for experience to count in an academic, an institutional environment that skyrockets concepts in the wake of experiences, of our bodies — slow, heavy, down; brown — and what happens to them, in the street, in the class, while we wait. “To build theory from description of where I was in the world”: is not to build a postmodernism that dicks around with footnotes while the women up top are being raped, murdered, stereotyped, erased.

Reading this book, for me, is like gasping in nettles. The stings, the stings. Of a thousand, of countless experiences. For Ahmed — questioned on the street, on being apprehended, asked too much, profiled, eye-rolled, of being used by an academic department, diminished and also overworked inside of a department — these experiences put a sneering rim around a world. It was bruising, or the bruises re-ignited, to read this. All the things I hold my tongue about here so as not to drown out the book, the review, the certain knowledge I have that every woman I know of every color has her own flood — the specific things, the things that have happened, the emails, the policies, the decisions, the inactions, the it-turns-outs, the oh, oks, the bad apology I accepted, the content of the lecture in the copy room, the content of the classroom, of the syllabus I was given, the word that was used, the words, when I was blamed, when I was subtly blamed, the syllabus again, his syllabus, my syllabus, when I was a student, the sexual harassment, my student who said, “This syllabus is bad,” the inauthority you live in when you don’t teach majority white men, the taking aside, my best friend, they made her pump her breasts in the janitor’s closet next to rat shit, the subtle sexual harassment, the asides that have happened, the asides that coat the rim. And to read it knowing that Ahmed snapped — left her academic position. This book is full of phrases like slogans, for dear holding. A feminist snap, “how we collectively acquire tendencies that can allow us to break ties that are damaging as well as to invest in new possibilities.”

This book is queer. Queer, “the moment you realize what you did not have to be.” It does not have to be a theory book. Or, theory can hold you, can how-to you, can even self-help you. It advises me to hold close my friends, to develop a feminist citational practice, and a feel for the line, for where joy can bubble up, can even spit, and where there really can’t be any, “A killjoy manifesto: requires an ongoing and willful refusal to identify our hopes with inclusion within organizations predicated on violence.” And theory doesn’t have to cite white men — “This is a very blunt citational policy . . . Perhaps you need to form a blunt policy in order to break a long-standing habit.” Feminism doesn’t have to stand down, to stay quiet in the relics, the passé, the identity politics = bad box, “Feminist and antiracist critique are heard as old-fashioned, as based on identity categories that we are assumed to be over. Some words are heard as dated; and those who use these words become those who lag behind.” This book goes ahead of what will be said. And what does it throw back but a bounty of tools? A manifesto even.

Everyone I know is asking the question: Should I leave academia? Or should I stay to commit my graffiti in the diversity office waiting room? To vandalize the core curriculum. To carve Audre Lorde on the syllabus wall. Trinh Minh-ha, Jewelle Gomez, Nas, Cavendish. Ahmed knows she had the privilege, the financial independence, to be able to leave — she knows we can’t all follow nor would we want to, all of us. But this book, with its experiences, and the beautiful bluesy way it says I see you, I see it, is like a searing off of all the gaslighting.

There’s a Disco Ball Between Us – Jafari S. Allen