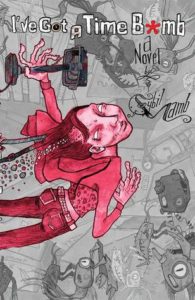 “Capitalism is a global system, constantly expanding and colonizing every autonomous society it encounters. In the long run, no one community or country can remain anarchist while the rest of the world is capitalist.”
—Anarchy Works, Peter Gelderloos

“But I know there’s a world in this world and I want to live in that.”
—The Undercommons, Stefano Harney and Fred Moten

I’ve Got a Time Bomb by Sybil Lamb is written in “scaled relative time.” While some events are date-stamped in the terms of our current genre of late capitalist slow apocalypse, the novel’s time-scale also places us in the “dystopian” future in which things are somehow worse. Time Bomb’s temporal doubling (here + future / no place? / . . . here?), is mirrored by its language, a hyper smoothie of cyber-punk / crust-punk doom and glee:

Sybil laid with Mary-Belle curled over her back, both of them in just panties, one another’s sweat washing over them like it was coming out of a hose, or a cappuccino machine.

Everybuddy out up here had a truck already, some people even had veggy trucks, but flying around in a truck was all Sally did, so she had the most flexible schedule.

Time Bomb drops us in the world and in needing to get the fuck out, to fuck shit up, find the “world in this world.”

It is halfway between road trip novel and free fall.

For Lamb — poor, trans femme, formerly homeless — utopian dreaming stems not from academic content mongering, but from necessity. To be trans is by default to be at the work of world-making, of creating a community, gender and body in which you can safely thrive — since the world as it currently stands often offers you none of those. For an alt opt-out book, Time Bomb has few artists. Instead, the immaterial labor of survival is recognized as labor, artistry. “Syb was kind of charming in a neat, refreshing way where she acted like charm was a minimum wage job she had to hold down 38 hours a week.” It’s the kind of move that could risk romanticizing structural trauma if Sybil’s “capers” weren’t worn with it. Eighty pages in, Syb is walking back from a gay wedding when two cis men call her faggot. When she name-calls back, one of them tries to beat her to death with a “38 inch iron pipe.” The hospital care is shitty, brief. She leaves with permanent brain damage — impaired speech functions, memory loss (another reason that the book is narrated in “scaled relative time”) — making it impossible to get any kind of paid legal work even if being an anarchist trans femme hadn’t already made that difficult. Sybil travels the undercommons, not just because she will not, but because she cannot, fit into or be cared for by the State.

But if Syb’s informal extra-state networks have utopian currents, they are also often toxic, short-lived . . . which is less an individualized drag than Lamb’s way of saying that living outside the state — without resources, with people also dealing with structural trauma — is hard. Most of Time Bomb’s chapters begin with a person or group of people that Sybil meets and lives with, and ends when those relationships fall apart. Syb falls in love with ano Sissy, cruises Cali in “rust and grease coated . . . Perfectly Normal Legal Ice Cream Truck” with recently orphaned Monday Mourning and PTSD-shook ex-soldier Sawzell. Poverty and trauma facilitate quick slips between mutual aid and mutual exploitation. When Syb and Sawzell start sleeping together (as Syb is also sleeping with Monday, who is in love with Syb), Syb is un-knotting Sawzell’s not very latent transphobia, getting psychic vengeance on every cis-male who uses and rejects trans femmes, and fucking Saw without his consent:

[Sybil] was mostly certain that boys, especially str8 boys, had their own special system for what is sexually appropriate in different situations . . . Getting a boy like that drunk and taking advantage of him by getting him to fuck you was more difficult than you’d have thought.

The chapter ends with Sawzell venge-fucking Monday, and Syb blowing up the ice cream truck. In the absence of any kind of fair political structure and the resources to establish successful radical communities, we rely on who and what we can, hoping that small groups, friends, and lovers can sop some of the ache gushing out of our collective political void when, often, they can’t. (Not because they aren’t strong and resilient; because of the void.)

In a 2015 review, Casey Stepaniuk wrote that Time Bomb felt too long, like a durational performance piece where you get the point (#fuckeverything), but also find yourself flipping through Insta while on your third glass of museum wine, wondering, tipsy, when you can leave. Even though the last one hundred pages are arguably the book’s narrative zenith (Syb in love with Sissy and working with a glam sex worker gang), we already know how it will go. When Sissy evaporates — less from fear of attachment than fear of losing her self-image as badass fucker who won’t attach — we are sad, and unsurprised.

Almost three years out from Time Bomb’s 2014 release, self-destructive nihilist rage feels relatable, but less urgent than a directed, anti-state movement. From momentary bash backs, like Corey Menafee breaking a Yale stained window depicting slaves, to long-term defense tactics, like those used by #NoDAPL, we are sick of being crushed, eager to fight however we can. Indeed, the most disappointing parts of Time Bomb are when Lamb’s “I’m fucked / fuck everything” mentality becomes tunnel-vision, blocking her, blocking her from seeing that, structurally, other people are more fucked. While Time Bomb was frequently advertised as taking place in “post-Katrina New Orleans,” the few chapters that do, in fact, take place in Katrina totally neglect to mention race. While NGO profiteering and disaster-porn voyeurism are lampooned, the government’s racist and tacitly genocidal inaction goes un-critiqued. (On this note, it feels exciting and necessary that two of Topside’s most recent releases — When the Chant Comes by Kay Ulanday Barrett and Reacquainted with Life by Kokumo — are by trans people of color).

Perhaps Time Bomb ends the only way it could. After Sissy leaves her, Syb is devastated and lives in Sissy’s house, alone, until the police kick her out. With a fractured ankle and bleeding, in the dumpster hiding from the cops,

She couldn’t take enuff of anything to stop her brain from screaming . . . After 12 hours she tried to find her [phone] battery. but when she burrowed to the bottom of the dumpster she found a cool ocean there. She let her thoughts float up and away, to get picked off by birds and cooked in the sun . . . She had finally crawled to the bottom of the ocean. Here she glided through blackness like outer space, she scuttled across rocks and lay on her back, surrounded by nuthin’ but darkness.