A Lady and Her Husband – Amber Reeves 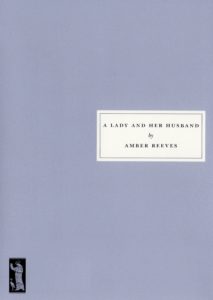 An invigorating combination of proto-feminist socialism and Edwardian concern for properly steeped tea, A Lady and Her Husband returns to print with just the right amount of lace about its bloomers. Originally published in 1914, this British social reform novel by lifelong activist Amber Reeves joins the ranks of American pre-war feminist classics such as The Awakening and The Yellow Wallpaper. Rather more practical and less psychological than either of these more well-known texts, A Lady and Her Husband walks readers through contemporary concerns regarding women’s workplace rights as Mary Heyham, a pleasant middle-class, middle-aged woman, pulls back her curtains and decides to question the world for the first time.

Picked up by the wonderfully specialized Persephone Books, a London-based press devoted to mid-20th century women writers, the novel speaks to current global concerns regarding the relationship between poverty and feminism. As feminism continues to battle for recognition, this reminder of its early 20th century fervor proves timely and inspiring. The novel’s cheeky, determined tone feels almost conspiratorial, like the sympathetically bemused eyebrow raised by an officemate who catches your eye as you listen graciously to the intern’s Really Important Insight. Tastefully embroidered with satire, A Lady and Her Husband will have you chuckling even as you shake your head.

The novel begins with the engagement of Mary’s youngest daughter and Mary’s realization that her position as active mother has passed. Concerned that she will wither away with no children to distract her, Mary’s husband and daughter decide that she should fill her time by taking a new interest in the family business: Imperial Tea Shops. Mary hires a secretary and sets off to interview the girls and their managers on the status of their shoes and the reputation of their homes. The novel explores Mary’s progressive awareness that for her to see the teashops for what they are, she must also learn to reconsider her beloved husband who runs them.

As in both The Awakening and The Yellow Wallpaper, the protagonist’s feminist realizations depend on the labor of working class women that provides her with the time and money to read socialist pamphlets and take a flat of her own in Chelsea to think uninterrupted. What initially shows potential as a teashop muckraker tones down from its early scenes of consumptive girls in swampy dish rooms to depict drier disputes between Mary and her entrepreneurial husband. The working women’s troubled lives, which inspire Mary’s change of perspective and her determination to become involved in the world beyond her parlor, only flicker at the novel’s peripheries and rarely attract more than passing remarks. The modern reader might take issue with the novel for this absence, finding it less satisfying than texts such as Louisa May Alcott’s Work: A Story of Experience or Sinclair Lewis’ The Jungle that attend to the daily life of the workers rather than to the conversion narrative of their well-bustled middle-class employers.

Even so, A Lady and Her Husband offers much to the lover of feminist history, providing opportunities to discuss the privileges as well as the challenges of budding feminists. And, in presenting the varied political positions of parents and children, it delves into generational differences, showing the ways that progressive movements depend on intergenerational communication. Mary Heyham may never believe in having more than the smallest edge of lace on her underwear, but she does begin to see the outside world with a more liberal eye.

Mary’s daughters, Laura and Rosemary, portray two versions of the next generation of feminists — those women educated enough to question and protest the position left to them by society, yet still expected to tamp down their suffragist flames with the wet blanket of an early marriage and all-consuming infant. While Laura’s activism has already been stifled by marriage and motherhood when the novel begins, Rosemary’s remains hot and feisty, fueling much of her mother’s education. Through the political awakening of her mother, Rosemary desperately seeks to prove to herself that marriage need not signal the end of independent thought or action. Downton Abbey aficionados might find themselves feeling a twinge of Sybil nostalgia in young Rosemary’s ardent care for changing the world.

For all its social didacticism, A Lady and Her Husband constructs memorable and endearing characters whose choices matter to the reader beyond the moral examples they provide. It refuses to take itself too seriously and delights in humorous collisions of the political and the intimate, such as Mary’s struggle to accept Laura’s predilection for flimsy lingerie and Rosemary’s passion for ethically-produced panties (just as expensive then as they are now!). In these moments, Mary’s difficulty as a mother to supportively negotiate both sexual and ethical political movements as represented by her daughters’ choices feels not all that distant from current debates.

A Lady and Her Husband draws a vivid and unusually optimistic portrait of women’s changing role in early 20th century British society. Although not what one could claim a page-turner, the novel is nevertheless an engaging read and an excellent addition to pre-war feminist studies.