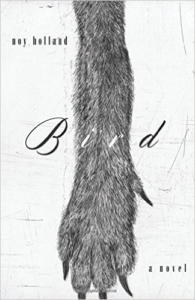 Bird, the first novel from Noy Holland – an established master of innovative and affecting short fiction – follows one day in the titular character’s middle-class, domestic life as a wife and mother of two. The narrative’s drama arises from the collision of this tranquil, structured, socially sanctioned present with Bird’s tumultuous past spent adventuring on the margins with her ex-lover, Mickey. As Bird dutifully attends to her domestic responsibilities, she reflects on her past in private and in conversation with her friend Suzie, who has persevered in the turbulent lifestyle that Bird has left behind. Holland’s prose – charged with the eros that haunts Bird – unites past and present as it traces the contours of Bird’s desires. Governed by the lyrical logic of Holland’s poetic prose, the novel testifies to the way in which even one’s immediate experience is fundamentally ecstatic (from the Greek: standing outside oneself), the domestic resonates with departure, and the present remains ever-pregnant with the past.

Sacred, she thinks, and narcotic. That’s how it felt to her.

And now every word Bird utters or hears makes it feel flimsy and dull. But it wasn’t. It was sacred, she thinks, and narcotic.

Naming an experience delimits its meaning and thus deprives it of richness. But note her inevitable return to the words “sacred” and narcotic” even after she admits that they are pale ghosts of what they signify.

Mickey, meanwhile, believes that naming things imbues them with meaning. The novel brings naming to the foreground by revealing within the first few pages that “Bird” is Mickey’s name for the protagonist. This theme recurs when Mickey harasses Bird for having named a pet rabbit Hoppy. Mickey takes offense and rages: “We nearly married,” he says. “We made a baby almost. Remember? What did you think to call her? . . . You think it doesn’t matter what you name a thing?” Later, he indicts her for never naming him as he named her: “You call my name like everyone else. Why is that, Bird? You don’t think of me? I’m Mickey like everyone else?” For Mickey, the public-ness of everyday names thwarts the intimacy made possible by a more private and essential language. “People should be named for themselves,” he claims. The novel plays out the truth of both Bird’s and Mickey’s beliefs about language. Names give power to things; they also restrict possibilities. Bird’s name – and thus the novel’s – become not only a conceptual center around which much of Bird’s self-understanding and the novel’s imagery circle, but also an incontrovertible sign of Mickey’s mark on her.

Besides the question of the meaning of language, the book’s central concerns are time, desire, and the relationship between the two. The intertwining of Bird’s two lives – accomplished artfully and often unsettlingly, such as in one passage that finds Bird caressing her baby in the present and undressing Mickey in the past – disrupts the common understanding of time as forward-moving and easily analyzable into distinct modes. The novel dwells often on finitude. “Never love a boy like Mickey,” Bird tells her child, then recants: “What I mean, lollipop, is love him. Love him hard and be done.” This celebration of finite love is provocative in a time that understands romantic love as reaching its ideal in a grasp at eternity that exhausts the lovers’ lifetimes. But for Bird, it’s also a way to make sense of her inability to make peace with her wants. In the face of her own inexplicable and unacceptable desires – for rough sex, restless living, an unmoored lover – Bird rationalizes her youth as a phase, misspent but spent. Near the novel’s end, Bird tells Suzie that “time heals . . . Better yet, it erases. Never happened! Wiped out! Off the record, free and clear.” But the novel belies Bird’s assertion that she’s been purified of her past, and much of its action finds her searching for meaning in the desires of her past life – was it happiness or a high, satiating an appetite or toying with revulsion? – and finding something messier than she’d like.

Near the novel’s end, Suzie and Bird discuss the meaning of the act that epitomizes Bird’s youth: having sex with Mickey. Suzie says:

“ . . . Last act. It was like that, fucking Mickey. Last act every time. Like you would die from it. It would kill you.”

“And it wouldn’t matter,” Bird says.

If “fucking Mickey” is a last act, a lived nihilism, an emergency, the novel is the answer to the question: what is the afterlife of such a cataclysm? Holland reimagines the domestic novel as a vast epic that asks after the structures that govern human experience as it is lived: through time, in speech, and fraught with desires. Sensual and searching and strange, Bird is a compact masterpiece that will keep readers rapt and returning.