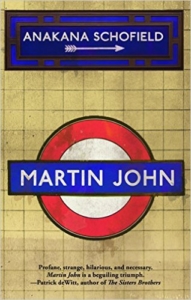 Selfhood, like any fiction, requires an accomplice. Consequently, coherence, integrity, personality are our collective and paranoiac fantasy. I am fundamentally paranoid, according to the French psychoanalyst Jacques Lacan, for what I am depends not only on another’s willing suspension of disbelief, but what they see and fail to see, what they do and do not know of me. I am contingent, dependent, and unevenly distributed amongst a multitude of witnesses. Did I behave badly? I might ask, desiring that my interlocutors return me to my well-behaved self, dreading they will dangle before me a horrid self beyond my mastery. This balance between dread and desire orders me, foils the slide of personality into paranoiac disorder. I have, you could say, a functional fear of persecution. Unlike Anakana Schofield’s eponymous Martin John, I am not at odds with the collective delusion.

Martin John, Schofield’s second novel, performs the paranoiac drama between identity, knowledge, recognition, and desire. The novel follows Martin John on and off of buses and benches, where he strategically places himself alongside various women, and smears himself against them. On the Tube “he lowers his zip. Leaves his fly undone. Until they see it. Of course they see it. He registers the gaze, the eye corner glance to confirm. I have you now, he thinks.” Flashing, Schofield writes in the novel’s opening pages, “is a very angry act,” and Martin John oscillates between an aggressive desire to be seen, and the fear that “they are watching.” The system for which he performs is rigged against him or so he believes. “He has told himself he is doing these things to register to them that HE KNOWS THEY ARE WATCHING HIM. I’ll give them something to look at.” Pages later, before “delivering” on an unconscious woman, he rolls her face down “to be relieved of her eyes.” In this scopophilic economy, seeing is knowing, and the structure of the novel registers this correspondence. The narrative is dispersed, divided, and organized under the recurring section headings “What they know,” and “What they don’t know.” This knowledge is the paranoiac’s personality, flashing angrily back upon itself. Fear, trepidation, and dread hover over the process of being known, of knowing oneself, and yet to be unknown, unseen, in this economy, is not to be.

Should we, then, approach Martin John with sympathy? Why else, for instance, might we dwell inside, or beside, the mind of a sexual predator? Why pathologize the desire for sexual mastery over women when it is woefully far from aberrant? Why does Martin John seem caught in the jaws of an illegible desire when in reality this desire enjoys a privileged mobility within our patriarchal economy?

There is, of course, another way of reading this. Perhaps, psychoanalysis, the phallus flashing onanist, is itself under interrogation. Interspersed throughout the fragmentary accounts of Martin John’s sexual aggressions are a series of interviews and cross-examinations. At the novel’s conclusion Martin John’s mother straps him, interrogation style, to a chair. At the novel’s outset, under the direction of a guard, Martin John’s mother prods him to recall the details of an incident involving a girl and her skirt.

Tell me again what you remember of the Chair and the girl?

Tell it to me slowly. Remember how you moved over to help

her, to let her know her skirt was hitched. Did you pull it

down? You did. Did you maybe pull it down now? To afford

her decency? You were trying to help her, weren’t you?

These interrogations exist as if in a vacuum, a series of questions lacking context and setting. The lack of setting lends the interrogation a timeless quality, as if it is not a singular dialogue but a monologue, or the echo of an endless investigation under which the event refuses to materialize. Then in a shift, reminiscent of Stein, the audience is addressed and the questions directed at the novel itself:

Still he maintained he didn’t know.

Or does he simply not know?

When is she going to tell us what he knows?

Are you feeling cheated? Frustrated?

This last passage reads almost like a parody of Sigmund Freud’s “Femininity,” a lecture in which Freud addresses the problem and mystery of femininity. “Throughout history,” Freud says, “people have knocked their heads against the riddle of the nature of femininity.” The introductory remarks are so extensive that the audience might well ask: “How long will we wait to find out like the last time that he doesn’t know either what she doesn’t know?” The claims of psychoanalysis are born of a patriarchal order whose long tradition it has been to bury alive or bring to light the female other’s illegible desire. Yet in a phallogocentric system, such as psychoanalysis, meaning depends upon emptying out the feminine other, so that she may reflect masculine mastery back upon itself.

Schofield, I think, attempts to subvert this via satire and a radical reversal of roles. The female analyst pokes, prods, and fails to fix her elusive subject. Feminine fear and anxiety is rendered legible through the silencing and pathologizing of male desire. Perhaps, Martin John is not so much a character as a caricature of masculinity, a figure that, though, granted a privileged position in meaning’s labyrinth, is, nevertheless, caught in his own circuit, fumbling with his zipper.