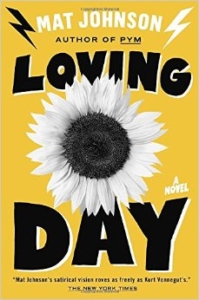 With his mentions of Trayvon Martin, Michael Brown, and Renisha McBride, Mat Johnson is clearly interested in speaking to contemporary times in his new novel Loving Day. It is a book that takes America’s troubled race-relations head-on. Specifically, it is a story about what it means to be of mixed heritage and the fraught decision some face of whether to identify as biracial or black. But this is only one aspect of his multi-faceted book, which is also a story about education, growing up, father/daughter relationships, and love. It is also a very successful comic novel. Johnson makes us laugh at his jokes in between wincing at his sharp observations of America’s racial pathologies. Johnson knows how to be earnest, sly, satirical, and hilarious, all in the space of one book, sometimes in the space of one page.

Johnson’s protagonist, Warren Duffy, has just returned to Germantown, a Philadelphia neighborhood, from Wales after the end of his marriage. He has inherited a falling-down mansion from his ne’er-do-well father and in short order discovers he has a seventeen-year-old daughter, the product of a brief, youthful affair. Warren has always identified as black, although he could easily be mistaken for white. His daughter has been raised Jewish but now learns of her own black identity.

Or should we call it her mixed identity? Johnson introduces the theme of racial categories and identity in one of the novel’s many comic set pieces, as Warren attends a comics conference to make a little cash by drawing illustrations. He hopes to take advantage of the large audiences of more famous artists to drum up some business, but quickly finds himself shunted off to the “urban” section. His protests get him nowhere:

I try to tell him that my book took place in the rural South, and he says, “That’s cool! You’ll be on the ‘Urban’ panel too; it’ll start in about an hour,” and sits me at a long table with three other black guys.

From here, Warren works hard to prove that he fits in this group in spite of his white appearance, but he is never allowed to settle into one identity for long. During the question and answer session after the “Urban” panel, a woman asks him, “But what is it like for you, as a biracial artist creating comic books?” This is an accusation in the form of a question — why are you calling yourself black and not biracial? — and it throws him for a loop. Although he rallies enough to give a rousing answer, the question haunts him. She accuses him of being a “sunflower,” a term one character defines as “Yellow on the outside, brown on the inside. A slang term for a biracial person who denies their mixed nature, only recognizing their black identity.”

This question of identity plays itself out in a quintessentially American family dilemma: figuring out where to send the kid to school. Warren’s daughter, Tal, refuses to attend her local public school and so father and daughter visit Umoja, a private school for black children, many of whom, like Tal, don’t know much about African and African-American culture. This visit gives Johnson a chance to poke some mild, good-natured fun at Umoja’s Afro-centrism. As Tal participates in a drum circle, she jumps too high for the school’s principle:

“See, the European mindset, it’s about distancing oneself from the planet, so their dancing is all about trying to jump away from it. It’s arrogance, really. It says, ‘I’m better than mother earth, I fly off of you because you’re beneath me. The African aesthetic is connected to the soil, see? So less of that flapping around like a pigeon.”

About which Tal says, “That guy is so crazy, he’s racist against jumping.” And so they visit the perfectly-named Mélange Center, a school for mixed-race children, and here the characters settle in and the plot takes off.

The rest of the novel occurs mainly in two places, Mélange Center, established illegally in a public park, and Warren’s sprawling, falling-down house. These are both contested, unstable spaces that mirror the characters’ heated debate over how to understand racial identity. Made up of disintegrating trailers and almost impossible to find, Mélange Center is constantly under threat of eviction. Warren can only hope the school will last through the year so his daughter can graduate and move on. Warren’s house is haunted by figures that appear to be ghosts, although he thinks they might only be neighborhood drug addicts, used to finding shelter in his previously-abandoned house. Other characters think the ghosts might be the spirits of Mildred Jeter and Richard Loving, the interracial couple whose lawsuit against the state of Virginia decriminalized interracial marriage in America. Unsurprisingly, “Loving Day,” the anniversary of this decision — Warren calls it “Mulatto Christmas” — is central to the novel’s plot. The ghosts (or “ghosts”) illustrate the haunting of America by its troubled racial history, and they also aid in characterization: belief in the ghosts signals hope that the wounds of the past can be healed. That the status of these ghosts remains uncertain for so long shows how vexed a question this is.

Johnson deftly handles both the unfolding plot and his characters’ salvos in their ongoing arguments. Warren and his long-standing friend (and former crush) Tosha are the fiercest debaters, Tosha vehemently arguing that claiming a mixed identity is a betrayal of blackness:

“They’re not mixed,” she snaps back, the word wet and viral. “I’m black. You’re black. African American, Bilalian, Negro, Colored folk, Blackity-black, black. Those Oreos up there, they’re black too, although I’m sure they’d cry if you told them. We’re all mixed with something, no one is pure. Who cares about percentages?”

Warren argues that claiming a solely black identity “negates part of who you are, culturally. As a person.” But Tosha believes the quest for balance is useless: “You could dress in just kente and only eat fufu and you still wouldn’t balance out the whiteness.” And back and forth they go.

The novel’s greatest success might be Warren Duffy as a character. Warren tells his story in the first person, and his voice is funny but also uncertain, wounded, and endearingly self-critical. He’s willing to take just about all the complaints and anger sent his way, much of which he deserves and some of which he doesn’t. He’s suffered enough in life to keep his expectations for himself low:

You have to be a big man to admit total failure, and I’m just tall enough. Hey, let’s face it, this life sucks. It is not going to get much better. I have no future to look forward to so I might as well indulge in the present . . . I’m going to burn [my father’s house] down and move to maybe Tahiti or anyplace else I can live off the earnings till I die of something soft like diabetes from too much fresh fruit.

But with Tal’s entrance into his life, he has a reason to stick around. She is a responsibility that brings fear but also hope. He remains foolishly self-sabotaging, always discovering too late that Tal is several steps ahead of him, but now he knows it’s worthwhile to try to keep up with her. For someone so perilously, comically close to failure, he is a surprisingly good guide through the novel’s troubled waters. He is excellent company and leaves us both laughing at him and wanting him to succeed.