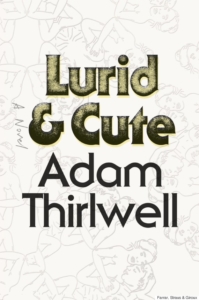 Lurid & Cute, the third novel from British writer Adam Thirlwell, a two-time Granta Best Young Novelist, announces itself early on: “I hope that if I prove one thing in the writing of this account it’s the importance of rules for living, which is perhaps why in this story of my moral life I have decided to begin with this episode of blood. It was I think the place where my usual categories disappeared.” The narrator’s humdrum life of ease has been irreparably altered. The downfall has come. The blood episode is indeed where it all begins: the narrator wakes in a hotel, naked next to one of his closest friends. She, too, is naked, and catatonic, and bleeding profusely from the face. As the blood runs, the narrator’s so-called rules for living dribble out. He has reached a point of crisis, one which threatens to upend his life of insipid complacence. The narrator has his reasons for gloom. He lives with his parents. He’s quit his job. He muffles his inner yelps of unhappiness with increasingly self-destructive behaviors: violent and demeaning sex acts, mix-and-match drug binges. “I would wake,” he tells us, “and feel just minutely transformed.” He goes on, asking for some readerly sympathy:

But was I really so wrong? Show me the married man who is still living at home with his parents and neurotic dog, who is putting his clothes in the wicker tub of a laundry basket, as he has done for more than thirty years, so that his mother can once a week take them downstairs to the washing machine, and then tell me if you think it might not be acceptable for this man to be given over to feelings of catastrophe . . . That’s maybe why every day now I woke up and was just dazed by reality, like any cartoon character who is supine after a fight, with many dingbats circling his bulldozed head.

Can we sympathize with him? To some extent — after all, ennui is a common malady of the overstimulated modern man. In essence, our narrator is just another guy living in his parents’ basement, except his wife and best friend live there, too, and instead of a basement it’s a suburban palace. He refers to himself as the dauphin, and if that doesn’t sufficiently communicate his jerkiness, his bad behavior surely will. This is not a likable guy. Minutes before paying a sauna employee for a backroom blowjob, our narrator even addresses the likable question: “If for instance things end up happening in some casa of ill-repute, well, the whole fluorescent question of likeability does impose itself.” Many things “end up happening” to our narrator; he chalks up his life’s unraveling to the work of outside forces and the slow unclenching of his own inhibitions. In all deeds and misdeeds, his agency is largely lacking, never overt: not How I Smashed My Moral Compass, but rather, How My Moral Compass Got Smashed. The book enumerates his infidelities, his clumsy crimes, his flaws, but Thirlwell’s achievement is in creating a character who is difficult — nay, impossible — to like, and yet, like Humbert Humbert, propulsive: he drives the novel forward by inviting us to sample the cringe-worthy wonders of his consciousness, and to sip the smooth erudition of his prose.

Still, a character we cannot like or admire threatens to contaminate the whole novel, and for some, this book will share the fate in esteem of its narrator. A crap guy in a crap book. Our dauphin does not cast quite the same spell as Humbert, and Thirlwell’s novel, a less magical feat, falls short of making his narrator bearable. Perhaps with a few more coatings of shellack — Nabokov’s linguistic wizardry, Nabokov’s clockwork plot — all we’d see is the shine and not the turd beneath. It’s an easy suggestion for Thirlwell, but by no means fair: be more like Nabokov!

Nevertheless, Thirlwell’s writing is a multifaceted gem, on one side elegant and crisp, and on another wonderfully jangling and clunky. Take that final clause from the excerpt above, the dingbats and the bulldozed head. Our narrator deals in the over-wrought analogy, and the audacity of these comparisons often strums a comic chord. He describes his anxious insides as an “undertow in the big deep dark sea, like I had grand glowing jellyfish and floating fish skeletons of anxiety.” Or he describes a kind of pornography he likes “where a girl’s choking on a penis and her saliva’s hanging down in strands like spaghetti or maybe more precisely spaghettini.” It’s hard to admire such comparisons when they serve to sour our opinion of the narrator. Yet somehow Thirlwell won me over, and I admired the writing — for the specificity and clarity of these images, the rumbling roll of the prose — even as I recoiled from the narrator as from a heap of trash. Like the language, the setting is an intriguing hybrid: suburban, tropical, near-future, uncanny, colloquial. Much of the action takes place in a London-esque suburb, yet dotting this terrain are palm trees, floral plants, and clumps of butterflies, elbow to elbow with more familiar urban charms — nail salons, hotels, cafes. It is a world of superficial distractions and pleasures, lacking substance and depth. In such territory, it’s harder than it looks to be good. Thirlwell’s linguistic cocktail and his sparkly landscape create a superficial world that wears its ethical climate like a piece of toilet paper stuck to its shoe.

From its beginning, the book promises comeuppance: watch the brazen, party-boy brat brought low. He loses, he learns. But in the end, what has he learned? Are we certain he has recommitted to the rules for living? If not, Thirlwell shows us that he has at least derailed himself from that nefarious track of sexual exploitation, crime and violence. He is still young; perhaps his life, the real thing and not the pleasure-mirage, is just beginning. Perhaps the life to come will be substantial, firm with integrity and meaning, and not merely a muted haze of pleasantries, the pastel hues of moral order and tedium. He’s learned that he’s a bit underdone. But what about us? We just read this big novel. I don’t need a novel to find a grade A asshole. What did we get for it? Art, for one — the alchemical power of literature. Here again is the narrator, his earnestness collapsing the distance between writer and speaker:

In such terrible tones I would tell my kawaii tale, with no distance between me and the absent person to whom I was talking. I saw it as one continuous thing, a little cascade with eddies and swirls, or an endlessly fidgeting fire. For always, I had only wanted to live. And the true life — and this is no new discovery of mine, after all — the life that was at last discovered and illuminated, and therefore the only life that has been truly lived, was the life you observe in retrospect, from some way-off point in the clouds, and one word for that kind of look might possibly be literature.

We see our narrator in unflattering detail; we are privy to his most unsavory thoughts. But literature can validate and aestheticize even a life lived in the lousiest way. Our dauphin’s life, however abhorrent, acquires meaning in the telling. And what better way to convey meaning than through a tale of redemption, and what better tale of redemption than that of a young man taking a second stab at adulthood: alone, in a crappy apartment, doing his own laundry, and perhaps, at last, at peace.