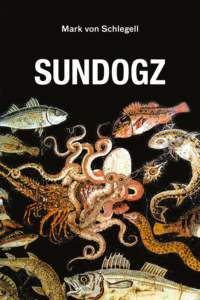 Sundogz is the fifth novel from Mark von Schlegell and the third in his Systems Series, which imagines an inter-planetary system in the twenty-second and twenty-third centuries, during the time of Earth’s collapse. It’s a science fiction novel and an unusual one, in the tradition of Philip K. Dick or Samuel Delaney, as concerned with the psychic and social consequences of its situations as it is with plot and adventure, although it is an adventure novel of a kind.

Any attempt to synopsize it is fraught with difficulties. Its opening section, the longest and most stable, takes place in an ‘Oan Bubble,’ a waterworld. A mermaid named Deary Devarnhardt and an ‘Oan Guard’ known only as The Doll are investigating an apparent disturbance. This leads to their kidnap onto a time-travelling, water-based ship called Good Fortune. The ship is travelling to moon Miranda with the secret aim of taking back control of the moon from radical feminist ‘Spacers’ (frontierspeople in the expanding habitation of the solar system) in the name of the sinister Global Authority. On this ship is Will Darling who is, in a strange form of ghost-writing, collaborating with an AI imprisoned in a locket on the continuation of the works of the dead author A. E. Winnegutt. This AI may or may not actually be a singularity, the difference being: ‘The AI works according to our physical laws . . . The singularity re-writes them, over and over and over again.’ The AI is also, incidentally, a distillation of Winnegutt’s pet dog ASTA. The books that they are working on become controversial. A main character has just been killed off (given the way that the books are being written, the passive voice feels appropriate) and a so-called ‘post-feminist backlash’ means there is a real risk to Will’s life. Furthermore, the Global Authority might be interested in ASTA and it’s potential power.

The narrative thus revolves around (at least) four threats: the discovery and potential exploitation of a water-paradise, the overthrow of a rugged utopian community, the dangers to Will posed by bitter fandom and his possession of ASTA, and the potential overthrow of reality itself by a singularity. Within these intertwining plot-lines, there are ten characters with point of view and a profusion of ideas (on the power of literature, the consequences of a singularity, the perils of time-travel, the metaphysics of water, the politics of distant space, etc.). Expository and reflective devices, such as footnotes, quotations and even essays, are numerous. There are also bizarre, sometimes beautiful, hallucinatory moments and literary experiments, notably around a theatrical production of Shakespeare’s Pericles, which utilizes the brain waves of its performers to project a poetic spectacle, a dreamlike, semi-unconscious generation. At a mere 247 pages (small considering its convolutions and by the standards of speculative fiction), the narrative is highly compressed, as well as hyperactive, and it sometimes struggles to meet the demands of its ideas. Its pace is so rapid that it is easy to miss the death of a main character. It is, in this respect, a frustrating book. But it is also an interesting one.

When Semiotext(e) launched their Sci-Fi series (with Schlegell’s first novel Venusia and Maurice Dantec’s Babylon Babies) they stated, with typical knowing quixotism and punk charm, that they wanted to ‘speak to the present demise by assembling radical models for unlikely futures.’ Although Sundogz is not a pessimistic work, it does seem indeed to respond to the ‘present demise’, or the suspicion of demise embedded in the present (our apocalypticism), and tries to imagine, in its future, ways of breaking with the past (the history of its worlds and characters, which includes our present).

The world of the Oan Bubble, for example. This is ‘a fully stocked hydrosphere deeper than all the Earth’s oceans in open space, gardened by genetically altered fishmen’, a paradise but a constructed one. It didn’t bear witness to what the book will later call ‘mighty old Earth evolution’, a history that is recalled in poetic imagery but lost materially (and not recalled without wistfulness). As The Doll and the mermaid Deary swim through this world, engaged in a nascent, playful romance (which the novel sadly dispenses with as it goes on), we are offered the glimpse of an idyll which, in its isolation, is beautifully balanced, ‘thick with life’, protected, nurtured and celebrated by a quasi-bucolic society. A living world removed from the failures of its origins on Earth.1

It’s a recurring theme. Two of the characters (The Doll and Maudeline de Lions) are effectively reincarnations, people who have been created anew out of the ashes of a past and forgotten self, phoenixes but of rupture rather than renewal. Likewise, the people of Miranda are attempting to create an open civilisation, along radical lines, away from the control of the Global Authority and the book stages their break from Earth’s old powers.

Earth does frequently appear though, sometimes somewhat arbitrarily. Schlegell seems to delight in incorporating elements of our world and cultures into his narrative, even where they barely have a place there. The Doll thinks about the relationship between pulp novels and ‘late capitalism’. A dolphin uses Duchamp for a riddle: ‘The bride stripped bare by the bachelors’. A marine affects a Scottish machismo with bits of dialect and references to haggis and kilts. These moments are no doubt partly there to serve the whims and tastes of Schlegell and his milieu, and to add splashes of postmodern, knowing humour. But they suggest something else: ruptures may risk trivialising continuities with the past.

In contrast, literature is the possibility of a superior continuity. One of the things that is refreshing about Sundogz is that it responds to current hopelessness (which is also a hopelessness about art) with a shameless belief in the power of literature. Both The Doll and Deary are literature obsessives. The sweet or frustrated exchanges between them are mediated by literature, by discussions about novels and poetry, which are their only real links to the outside worlds. Deary takes her name from a Winnegutt character. Her world, that of the Oan Bubble, was inspired by that of Winnegutt’s books, which can also, as previously mentioned in the case of Will’s situation, inspire hatred and murder. When Will sees Deary, he sees Winnegutt’s vision realised, and falls in love. The production of Pericles becomes the showdown for fight between Miranda and the Global Authority.2 It is even literature that enables the possible singularity to be contained. All this is perhaps excessive but, in addition to allowing Schlegell some reflexive acrobatics, it is what motors the book’s hopefulness.

Literature offers the opportunity for transmitted experience, for shared experience, for combined and effectual mythoi, even through the ruptures of utopia and reincarnation. Perhaps literature for this novel is something that grounds itself, that can be the continuity without continuity of a reconstituted world. Whatever the case, this sense of belief is welcome. We only wish that the book had more time to embed its ideas, to ground its poetry, to explore its own worlds, and demonstrate more fully the power of its belief.

1. At one point the novel takes us to a marine environment on Earth, after Earth’s fall. Although it is blasted by death and the devastation wreaked by human society, it is also teeming with life and unknown possibilities. However, they are possibilities of life alone, not of thought, or of society, which has definitively collapsed. One is reminded of Kafka: ‘plenty of hope but not for us’. For Schlegell though, there is hope, just not for this world.

2. This showdown takes a somewhat puerile form. The novel’s main antagonist is transformed into a giant phallus and shot by a character who, incidentally but not really incidentally, is a feminist. Incidentally but not really incidentally, the book’s sexual politics seem to be reflective of a certain kind of contemporary post-feminism. The women are strong, independent and frequently sexualised. There is little apparent gender inequality but the battle of the sexes rages on, often taking fairly ridiculous form (the threat on Will’s life for his part in killing off a central female character in A. E. Winnegutt’s posthumous writings, for example). Schlegell cannot or doesn’t care to envisage the possibility of rupture here. It would be interesting to look at this in more detail, but there isn’t room here.