The Essence of Jargon – Alice Becker-Ho

ARGOT: at first denoted the community of beggars, thereafter in the seventeenth century, their language

ach broch (Yid.): wandering brothers, but also a community of beggars (corruption of ach’ bar rosh: Hebrew for head of a mouse, the emblem adopted by German beggars in the seventeenth century)

ARGOT is formed out of ach [brother] and guit [beggar in Middle Dutch, German gauner], which in Spanish translates as germanesco o de la germanía [language of brothers] 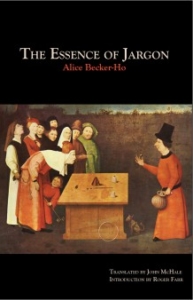 The above definition glossary entry from Alice Becker-Ho’s The Essence of Jargon reveals the author’s point that slang words may have multiple origins and equivalents, taking sometimes-meandering paths to their final meaning. Becker-Ho’s academic work of “slang lexicology” aims “to convey . . . some idea of what the essence of slang might possibly be.” The author does so by taking the reader on a journey through the Parisian world of the “dangerous classes” and those who persecute them (the police).

Argot, or Parisian slang, is spoken by the “dangerous classes”: without a specific definition laid out by Becker-Ho, one gathers that these are lower, sometimes criminal, classes made up of “marginalized groups” such as “Jews, Gypsies, common-law criminals, prostitutes, homosexuals, political opponents and artists.” The author stresses that this collection of people live outside of society’s values and constraints, which gives them the ability to take straightforward language and bend it into different shapes for their own use.

Slang both communicates and protects: those who understand slang — in this case, the “dangerous classes” — receive and absorb straight information, while those who are not part of the groups using such slang — i.e., policemen and other “adversaries” — are deceived by the double or covered meanings in the language.

The Essence of Jargon is divided into two parts (three if the glossary counts): “What Slang is Not” precedes “What Slang Is.” There are a number of terms Becker-Ho must familiarize her reader with before getting into the meat of her study of “what slang is”; the first section defines and explains a few key terms for her study. There are patois and dialect — neither of which are slang but both of which are forms of provincial or regional speech, the difference being that a dialect is written and spoken, while patois is not written. Add to that “popular language,” which is “the national language spoken by the urban population” (Becker-Ho refers here to popular French, spoken in Paris). Popular language stands at odds with dialects, because the former evolves “rapidly and continuously” while the latter are more fossilized and preserved in specific regions.

And what about that term from the book’s title, jargon? Becker-Ho explains that jargon used to mean a “secret language spoken among beggars” before argot supplanted it as such (see definition at the beginning of this review). Jargon evolved into what we understand today as a specialized language or set of expressions and words used in a particular profession or field. Argot, on the other hand, implies “a different conception of the world” and is tied more to mindset and way of life — in Paris’ sense, that of the “dangerous classes.”

Becker-Ho spends many words picking apart the conclusions of other linguists and lexicologists in regards to their studies of slang words. While this may be important for an academic study, it rather muddles Becker-Ho’s own stance on “what slang is.” What does emerge is that argot is playful and creative — London’s rhyming Cockney slang immediately came to mind — and also bound more to the lower, “dangerous classes.” Indeed, Becker-Ho draws the same parallel: “Argot is Parisian just as cockney is London town.” Popular spoken French is more classless and evolves by mimicking upper class speech.

Put together, the introduction and glossary are longer than Essence’s text itself. It is not clear whether the glossary — following the main body of text — is actually the whole point of The Essence of Jargon, or if the terms discussed within the text — such as various names for policemen (who, in slang, are denoted by allusions to sodomy, or “being had”) — are, excuse the pun, the essence of her study. Although short, Becker-Ho’s study is dense and requires acute attention and dedication to process and understand. As a language enthusiast and teacher of the English language, I’ve done enough teacher training to have started to scratch the surface of linguistics, but even so Becker-Ho’s text is not easy to unravel.